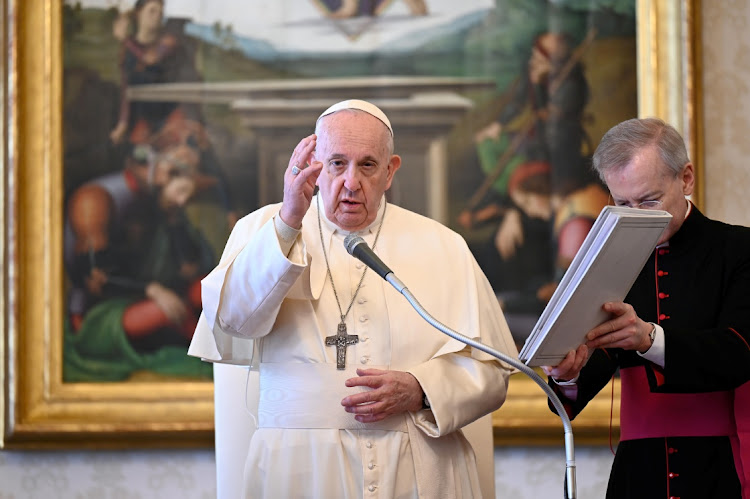 Pope Francis' comments came in the middle of a debate over whether pharmaceutical companies should waive patent protection for Covid vaccines.
Image: Vatican Media/Handout via REUTERS

Pope Francis yesterday supported waiving intellectual property (IP) rights for Covid-19 vaccines, backing a proposal by US President Joe Biden that has been rebuffed by some European nations, including Germany.

In a speech to a global fundraising concert to promote fair access to vaccines, the pope said the world was infected with the “virus of individualism”.

“A variant of this virus is closed nationalism, which prevents, for example, an internationalism of vaccines,” he said in the recorded video message.

His comments came in the middle of a debate over whether pharmaceutical companies should waive patent protection for Covid vaccines.

Biden backed such a move on Wednesday, heeding calls from India, SA and more than 100 other countries.

However, many European countries, led by Germany and France, distanced themselves on Friday from the suggestion, arguing that the key to ending the pandemic was making and sharing vaccines more quickly.

European Commission president Ursula von der Leyen said this week she was open to discussing Biden’s proposal, but that the US needs to dramatically ramp up the number of shots it is exporting in the short term.

Von der Leyen said vaccine manufacturers in the EU have exported about half of the shots they’ve produced, about 200-million in total, and urged the US to match that.

“We invite all those who engage in the debate for a waiver for IP rights to join us to commit to be willing to export a large share of what is being produced in that region,” Von der Leyen said at a media conference in Portugal, during a summit of EU leaders.

Reuters reports the European Union on Thursday backed a US proposal to discuss waiving patent protections for Covid-19 vaccines, but drug makers and ...
News
1 year ago

The US has so far gobbled up nearly all of the doses produced on its soil. It has sent 4.2-million AstraZeneca shots — which aren’t authorised for use in the US — to Mexico and Canada, and says it plans to ship 60-million more of those doses by the end of June. The doses are undergoing a safety review.

Pfizer has also begun filling non-US orders from its US production, but hasn’t said how many doses it has shipped or which countries have received them.

“The EU is the only continental, democratic region of this world that is exporting on a large scale,” Von der Leyen said.

Growing European opposition to the US stance is putting Biden on the spot while also stirring debate in Europe about the wisdom of seeking to waive IP rights for vaccines, which would require a lengthy process at the World Trade Organisation.

It’s also exposing long-simmering tensions over US “vaccine nationalism”, which has left the EU and others to carry the weight of meeting global demand.

French President Emmanuel Macron criticised the US and the UK for blocking vaccine exports. “The Anglo-Saxons are blocking many of these ingredients and these vaccines,” he said.

The Pfizer Covid-19 vaccine, 325,000 doses of which landed in Johannesburg this week, offers 95% protection against hospitalisation and death, ...
News
1 year ago

SA will know this week whether the B.1.617 variant associated with the deadly new Covid wave in India is present in the country.
News
1 year ago

It’s a race against time, but experts say that vaccines — due to be rolled out more broadly from May 17 — are unlikely to save SA from a Covid third ...
News
1 year ago