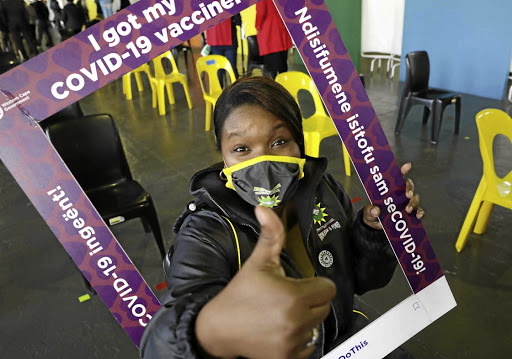 President Cyril Ramaphosa is caught between a rock and a hard place ahead of tonight's family meeting - with calls by health experts to introduce harsher restrictions in light of an unprecedented surge in infections, while organised business calls on him to keep the economy open.

His challenge will be further complicated by the need to keep the faltering vaccination rollout moving, while stemming the spread of the dangerous and highly contagious Delta variant, which is spreading across the country.

Top government officials are said to have been left shaken by an expert briefing to the National Coronavirus Command Council (NCCC) yesterday. Ramaphosa is now scheduled to outline the government's course of action in a national address at 8pm tonight.

The head of the ministerial advice committee (MAC) on Covid-19, professor Koleka Mlisana, said there is an urgent need for tougher regulations, including restrictions on the movement of people and a total ban on gatherings.

"Looking at how quickly this variant actually leads to increased cases, for the provinces other than Gauteng we are probably talking a matter of days," she told a hastily convened press briefing yesterday.

The briefing was quickly followed by a meeting of the National Joint Operational and Intelligence Structure (Natjoints). Insiders told the Sunday Times the structure is proposing additional restrictions in Gauteng, which has seen record-breaking levels of infections over the past week, putting hospitals under strain.

It is believed the proposals included banning all gatherings and alcohol sales and bringing school holidays forward. People should work from home where possible.

The command council will meet again today to finalise a way forward.

"This will be followed by the presidential co-ordinating council, which includes premiers, executive mayors and representatives of traditional leadership," said government spokesperson Phumla Williams. "A special cabinet meeting will take place to process the recommendations from the Natjoints."

The latest surge in infections could have a devastating impact on SA's vaccine rollout, which is set to expand significantly over the next few weeks, opening up inoculations to over-50s, and targeting 250,000 a day by the end of July.

But registrations for the vaccine have so far been low, and could be further affected as people stay home as the surge spreads.

Organised business is pushing to leave the economy open, saying there will be "significant impacts in terms of reductions in GDP if we go through level 3 to level 4 restrictions".

A minister who attended yesterday's meeting of the NCCC said there was "a sense of shock" following a presentation by the MAC.

"They propose that we must take drastic measures," said the minister.

The experts are said to have pointed out that even in countries where the majority has been vaccinated, the Delta variant continues to cause havoc.

The minister said the proposal did not specify whether tighter measurers should be introduced in Gauteng only or throughout the country.

"They just painted a picture to say . in a general way, you need to take drastic measures or else people are going to perish."

He said this put the cabinet in a difficult position as there are "competing interests".

"The effects of the first hard lockdown are being felt to this day. All industries were affected but the hospitality sector was the worst affected. If you shut down the country it will just die."

Organised business has urged a nuanced approach that balances restrictions against the need to save jobs and keep the economy going. 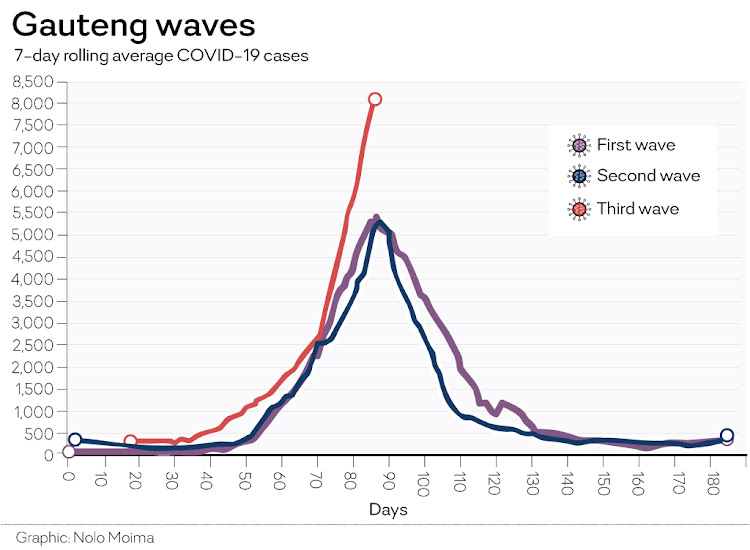 A comparison of the various waves in Gauteng.
Image: Nolo Moima

In Gauteng, the hotspot of the third wave, premier David Makhura this week all but ruled out moving to a level 5 lockdown in the province.

Martin Kingston, chair of the steering committee of Business for SA (B4SA), said the organisation would support further restrictions under level 3, including extending the curfew and limiting numbers at venues, but every effort had to be made to keep the economy going "because we can't afford to shut it down".

"We believe that there are significant impacts in terms of reductions in GDP if we go through level 3 to level 4 restrictions," he said.

"I think a level 5 lockdown is completely unrealistic and though I have seen some speculation, I don't think there is any prospect of that being the case."

Sandile Zungu, president of the Black Business Council, which is a member of B4SA, said the economy should not be shut down at all.

"We are not a First World economy like those in Europe or America which can bounce back with relative ease," said Zungu.

At yesterday's press briefing, acting health minister Mmamoloko Kubayi made an impassioned plea for Gauteng residents not to have gatherings this weekend.

"We continue to see infections rapidly rising and Gauteng continues to be the epicentre of these new infections.

"We remain very worried about the rise in hospitalisations, which is putting a lot of strain on the health facilities in Gauteng. The trends are clearly showing that other provinces are going to experience the trend we are seeing in Gauteng, notably in the Western and Eastern Cape."

The highly infectious Delta variant, which has caused Covid to rampage through India, has been widely detected in tests, said professor Tulio de Oliveira, a member of the ministerial advisory committee.

But he said the Pfizer vaccine being administered in SA is up to 96% effective against the Delta variant.

De Oliveira told the briefing that the Delta variant is now the dominant strain circulating in SA.

The latest reproduction number of 1.3 - which means every infected person infects another 1.3 - shows SA's epidemic has now entered a phase of exponential growth, he said.

De Oliveira said data on the spread of the Delta variant was gathered from widespread sources in KwaZulu-Natal.

Though data is still awaited from Gauteng, it is believed the province's surging cases are due to the highly transmissible variant. The variant has reached 85 countries, said De Oliveira, and is already spreading rapidly through Africa.

"It is very quickly starting to dominate the global pandemic. It is really, really highly transmissible, more than all other variants, including the Beta variant from SA," he said.

"When transmission grows very, very fast we overwhelm our hospitals and we have extra deaths, not just from Covid but from other diseases."

What to expect when Ramaphosa addresses the nation on Sunday

When President Cyril Ramaphosa addresses the nation on Sunday, indications are he is likely to ban gatherings and tighten restrictions on alcohol.
Politics
10 months ago

President Cyril Ramaphosa will address the nation at 8pm on Sunday following the discovery of the new Delta variant in South Africa, the government ...
Politics
10 months ago

SA's third wave of Covid-19 is on course to surpass the peak of the second wave after the arrival of a new variant of the infection, acting health ...
News
10 months ago