Challenger's victory in Zambia is keenly felt across the Zambezi

With less than two years until Zimbabwe returns to the polls, results have left Zanu-PF and MDC eying a repeat performance 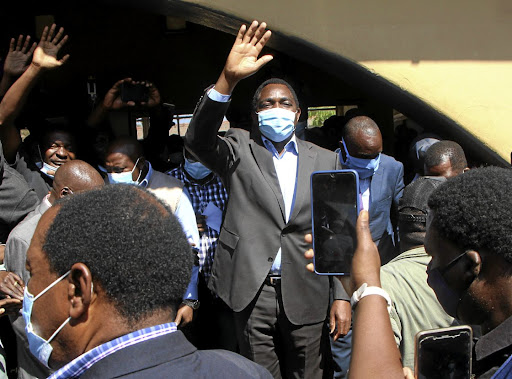 Zimbabwe's reaction to the #ZambiaDecides2021 hashtag has been so poignant as to give the impression that the election took place in the country itself, and not its neighbour north of the Zambezi.

For the powers that be in Harare, the anxiety and fear were just as palpable, in the fact that state media was largely silent during the five days of the electoral process in Zambia.

There were strident tweets, however, from President Emmerson Mnangagwa's spokesperson George Charamba, featuring a pre-election caricature of the eventual victor, Hakainde Hichilema, as a "sellout", and a post-election declaration - referring to outgoing president Edgar Lungu - that "ED Won't Leave Office After Losing Election" (because the men in uniform will be there to ensure he stays put).

On the other hand, Zimbabwe's opposition MDC Alliance - particularly its leader Nelson Chamisa - was elated at Hichilema's victory. Indeed, the parallels between Zambia and Zimbabwe are too close to call, especially on the electoral front.

Wind of change depends on a new generation of voters

It has not been a great month for the concept of a party cadre here at home or further north in Zambia, writes S'thembiso Msomi.
Opinion & Analysis
9 months ago

Therefore, the first observation to make in this regard is that it confirms the pattern, not only in Africa but almost universally, that massive voter turnout - usually on the back of mass voter registration, particularly of new and young voters - is almost always a protest against the incumbent.

There were more than 1-million first-time voters, mostly young people; and, equally telling, an organisational framework on the part of the opposition that translated the massive voter registration exercise into a high turnout at polls across the country, thereby defying whatever rigging had been planned, and defending the vote through the systematic deployment of polling agents and volunteers at every polling station.

That has been the history of elections for most of post-colonial Africa: the reality of the African condition in which there has been an inexorable decline of economic and social conditions; one in which the inherited dispensation at independence - or post-apartheid - cannot cater for the new demands for democratisation and access to such fruits of independence as education and health facilities for the mass of the population, and with the quality and level of delivery as it had been for the white settler colonial minority.

In the final analysis, #ZambiaDecides2021 was definitive in its outcome, especially on the presidential front, where Hichilema beat the incumbent by more than a million votes

The strain on the budgetary requirements for the democratisation of economic and social spheres grows, inevitably, as do the deficits and gradual decline in economic performance, with the passage of time and attendant on the burden of continuity of economies that have historically benefited a minority.

This is exacerbated by modes of production based on extraction of raw materials for export as opposed to their beneficiation, and the increase in the need for employment opportunities for a growing population, especially that of the youth, who constitute an average 65%-70% of those under the age of 30 in Africa.

These are the conditions that have invariably translated into political and electoral nightmares for incumbent regimes and the "Big Man" rulers in Africa. The era of the one-party state, not to mention the accompanying rhetoric of post-liberation promises, has long departed.

Therefore, since 1991 - when Kenneth Kaunda so gracefully conceded to the new march of multiparty democracy - it has become commonplace to witness the decline and collapse of the parties of independence in Africa.

New dawn for copper in Zambia

Those that do survive the onslaught, like the Chama Chama Mapundizi of Tanzania or even the former liberation movements of Southern Africa, do so by the skin of their teeth. In Zimbabwe in particular, Zanu-PF last won an election even approximating the conditions of free and fair in the 1990s (though some will argue that there has never been a truly democratic poll in Zimbabwe since independence).

The main reason that #ZambiaDecides2021 has shaken the very edifice in Harare, therefore, is the realisation that were it not for the military and related securocrat state, Zanu-PF could have certainly faced the same fate - in 2008, 2013 and 2018 - as visited on Lungu and his party in Zambia.

Therefore, the important lessons, for both incumbent and incoming regimes, from #ZambiaDecides2021 are these: it cannot be business as usual in the face of newer and younger voters who are armed with social media and the best references with respect to electoral and governance issues.

Secondly, the primacy of a comprehensive policy agenda through which to address the challenges that confront contemporary African societies, particularly youth unemployment, service delivery. Thirdly, and above all, the need for an accountable executive under the watchful eye of a vibrant legislature and a fiercely independent judiciary.

In the final analysis, #ZambiaDecides2021 was definitive in its outcome, especially on the presidential front, where Hichilema beat the incumbent by more than a million votes. It was an outcome against which even the most reluctant of incumbents would have been an obvious rogue not to concede.

All the same, former presidents, particularly Rupiah Banda, diplomatic nudges by various ambassadors (for example those of Britain and the UN), and even, according to some reports, such heads of state as SA's President Cyril Ramaphosa, all helped Lungu concede, thereby ensuring a democratic and peaceful transition for #ZambiaDecides2021.

The main reason that #ZambiaDecides2021 has shaken the very edifice in Harare, therefore, is the realisation that were it not for the military and related securocrat state, Zanu-PF could have certainly faced the same fate - in 2008, 2013 and 2018 - as visited on Lungu and his party in Zambia

In conclusion, one has to echo this point: democracy needs strong institutions and not strongmen - therefore, invest in reforms of institutions, including the reorganisation and revitalisation of the opposition movement. This is an obvious message to Zimbabwe, where institutions such as the Zimbabwe Electoral Commission's reputation is in tatters, where militarisation of politics is now almost legion, and where the coup needs to be cured through the restoration of constitutionalism, the rule of law and the return of the military to the barracks.

But is this possible before Zimbabwe's next elections in 2023, or are we here to witness a repeat of the same - with opposition forces not organised and vital enough to overcome and overtake the securocrat state through a resounding electoral victory?

The #ZambiaDecides2021 precedent should inform us on the following, if there is to be a free and fair election in Zimbabwe in 2023: an unbridled voter registration programme, a reformed electoral commission, and transparent voting and vote tabulation system; the presence of experienced domestic and international observers; and the requisite diplomatic scaffolding on the part of regional and international factors and personalities.

Above all, it is inconceivable that all this can take place without the isolation of the military and security apparatus from the electoral process. This is the major challenge for democratic forces in Zimbabwe.

The question is whether this is attainable in the less than 24 months to the election in July 2023.

Four priorities for Zambia now that Edgar Lungu has been unseated

Hichilema streets ahead at Zambian polls, but Lungu still tipped to win

The opposition leader has almost double the votes, with both sides accusing the other of underhand tactics
Africa
9 months ago