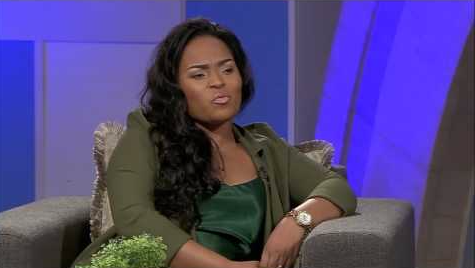 Singer Bucie reveals that she and soccer star Jimmy Tau are related.

Bucie took a trip down memory lane to describe what it was like growing up with soccer star Jimmy Tau, whom she revealed is a close relative of hers.

Speaking to Anele on Real Talk with Anele, Bucie explained their relation and described the soccer star as her brother.

"He's my brother, not even my cousin. My mother and Jimmy's mother are sister's," she said.

Bucie explained that Jimmy has always been there for her even as a young girl.

"My brother can't sing to save his life but he has a bass voice. The other day I called him and he said, 'ya you should tell them I taught him how to sing' but I said as long as you tell them I taught you how to kick a ball," she said.

Bucie spoke about how Jimmy also influenced her taste in music through the music he played every time he came over to their house. She explained that the music lead her to go study bass guitar.

"Jimmy had Fresh's album and he played the song all the time. He would come to my grandmother's (where we stayed) everyday to see my grandmother and he would play it," she said.

The musician announced her retirement from the industry earlier this year.

“This is my final album‚ I’m out. I also just want to take some time off and spend it with my family. I’m a mom again. I have my sons and need to spend time with them‚” she told  Sowetan.

After six year's on Rhythm City, actress Nolo Phiri has decided to leave the popular E.tv soapie to become a production company boss.
TshisaLIVE
4 years ago