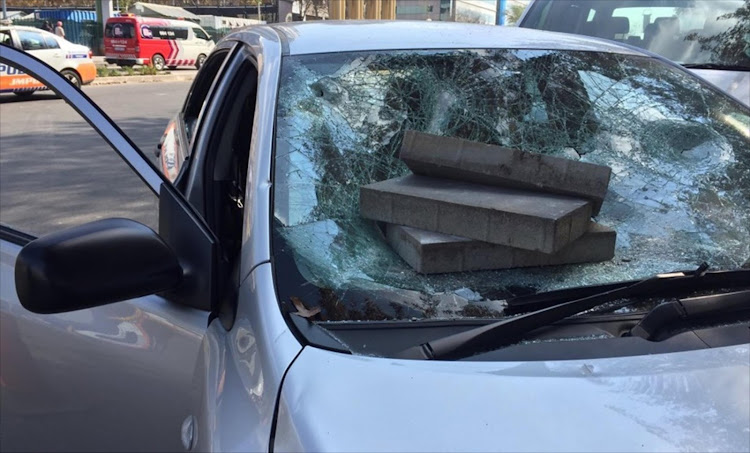 Uber taxis were attacked across Johannesburg last month. The cars were damaged and drivers and passengers intimidated amid dissatisfaction by metered taxi operators. File photo.
Image: The Sandton Chronicle

As another attack on an Uber driver took place in Gauteng today‚ Police Minister Fikile Mbalula announced that he was joining his transport counterpart in devising a plan to deal with the mounting violence.

He said he was intervening in the conflict between the metered taxi and e-hailing service and meeting Transport Minister Joe Maswanganyi.

In response‚ Gideon Leriba‏ @GideonLeriba alerted the minister to another taxi crime for police to investigate: “I had a case today in Kempton Park where an Uber driver was attacked by Maxi Taxi drivers. They took cash‚ cell phone and tablet from him."

Mbalula made the statement on his Twitter account‚ alongside a joking video of himself attributing Uber’s popularity to struggling celebrities‚ who cannot afford their own wheels‚ maintaining their dignity by calling the unmarked cars for a ride to an event.

This did not go down well with everyone‚ as he was called to order for making jokes when an Uber driver died this week.

We are intervening in the issue between Uber and Meter Taxis. Meeting with the Transport Minister pic.twitter.com/C6veUGn9yT

Maswanganyi‚ meanwhile‚ has denounced the spate of violent attacks.

“This kind of behaviour‚ which breeds intimidation and anarchy‚ stands condemned and should not be allowed in our public transport system and our country in general‚” the transport minister said in a statement on Tuesday.

Maswanganyi said he would “soon” be meeting the Meter Taxi Association as well as Uber management.

“As government‚ we will also work with all the Ministers in the Security Cluster as well as other relevant government departments to have a multi-pronged approach in dealing with this debacle‚” he said.

He called on anyone with knowledge and information about the perpetrators to report “such gruesome incidences” to the law enforcement agencies.

Uber driver Lindelani Mashau died on Monday. He had been admitted to hospital after being seriously hurt when his vehicle was set alight on June 10 in Sunnyside‚ Pretoria.

Uber maintains it is not a security company and is calling on law enforcement agencies and the police ministry to get involved and solve the ongoing attacks.

Gautrain stations have been hot spots of the violence but the rail service confirmed this week that it will not be deploying extra security near its stations.

“Our security personnel cannot risk their lives‚ or the lives of others around them in an attempt to deal with a situation that they are ill-equipped to. We therefore rely on the police and its expertise to deal with the situation‚” said Kesagee Nayager‚ Gautrain spokesperson.