Mother goose and babies bring highway to a standstill

Rescued goslings to be hand-reared and released 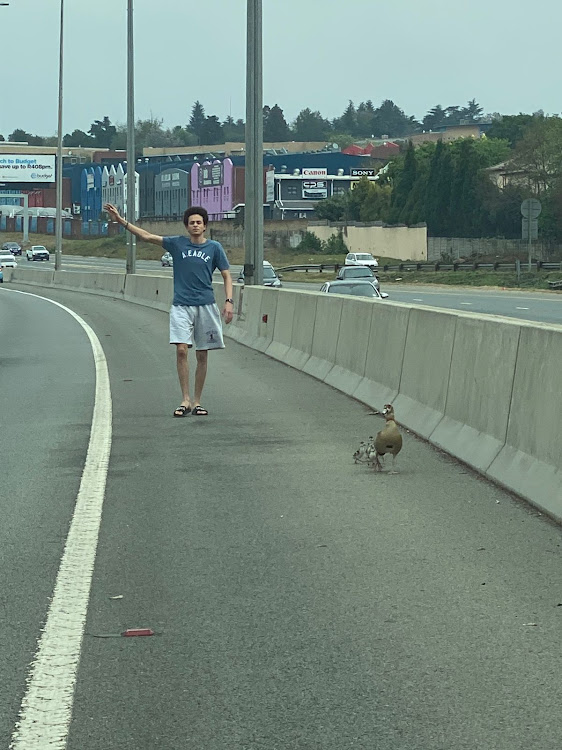 Brenday Murray of the Owl Rescue Centre in Hartebeespoort heads out to rescue a mother goose and her three babies as they try to cross the busy N1 highway near Strijdom Park in Randburg.
Image: SUPPLIED

Three baby geese, which brought the N1 south highway to a standstill between the Malibongwe and William Nicol off-ramps at lunchtime, have survived happily and are now being hand-reared.

Brendan Murray of the Owl Rescue Centre in Hartebeespoort was out rescuing a baby owl in Olivedale when the call came in on the animal rescue networks.

“Normally whoever is closest gets sent out,” he said, explaining why he was called out to the middle island of the busy highway where a mother Egyptian goose was stuck with three two-day-old goslings. He said it was not uncommon for geese in the area to have their babies away from water, and then battle to get their little brood to a dam because of a concrete barrier that separates the north and southbound lanes of the highway blocking their path.

“We believe she had been nesting somewhere near the Hyundai building in Strijdom Park and then decided to take the babies to the dam near Golden Harvest about two kilometres away on the other side of the highway,” Murray said.

The sight of the goose followed by her tiny babies, unable to jump the large barrier, brought the lunchtime traffic to a screeching halt as motorists called on wildlife rescuers for help.

Murray said an ambulance from Emer-G-Med also came out to help, as did other passing motorists who he knew as enthusiasts who had sponsored owl houses in the area. 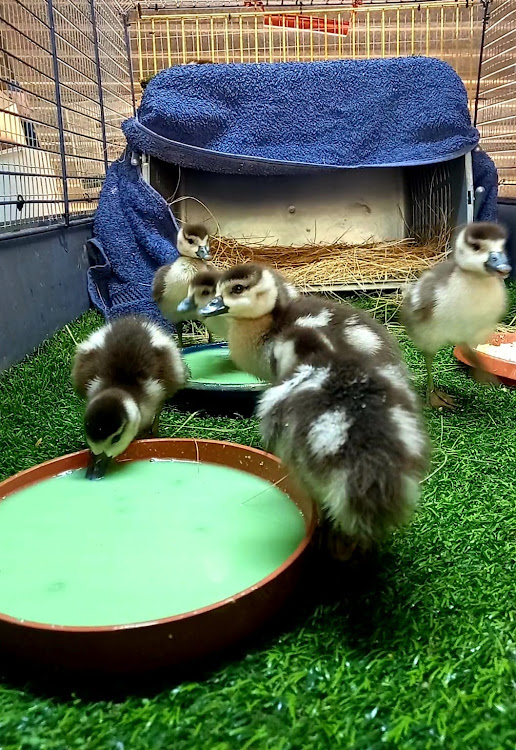 Safe and happy. A day after their highway rescue ordeal the baby Egyptian geese are being hand-reared.
Image: SUPPLIED

“We see about 20 or 30 cases like this a year. Normally we just pop the babies in a box, carry them across the highway and the mom follows closely. Then when they are safe and united, we just let them go and they head off to the dam,” Murray said.

“We took the babies to SA Wildlife Rehabilitation where they will be hand-reared. They will be big enough for releasing into the wild in about a month,” he said.

A sting in penguins' lucky tale

When two African penguin chicks hatched in Cape Town this week, conservationists trying to save the species breathed a sigh of relief for the first ...
News
8 months ago

Stellenbosch University MSc student Dakota Guy and her fellow researchers are trying to formulate replacement milk to be used to bottle-feed orphaned ...
News
8 months ago

Animals are shape-shifting, so don’t be surprised if you see a real Dumbo soon

Sightings of boars trotting along the streets have become so commonplace in some neighbourhoods of the Italian capital that the problem has spilt ...
News
9 months ago