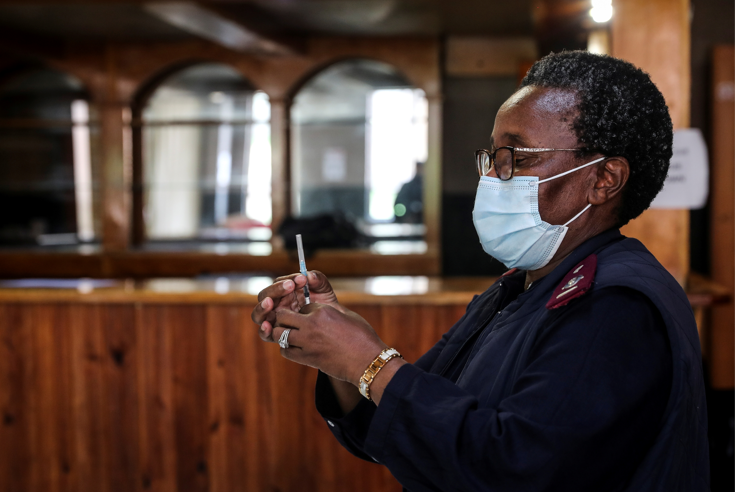 A healthcare worker prepares a dose of the Pfizer coronavirus vaccine amid the spread of the Omicron variant in Johannesburg on December 9 2021.
Image: REUTERS/Sumaya Hisham

A total of 68,437 tests were conducted in the last 24hrs, with 23,884 new cases, the National Institute for Communicable Diseases said on Tuesday.

The institute also revealed that 24 Covid-19 related deaths were reported in South Africa, bringing total fatalities to 90,172 to date.

Sundowns march on with win over struggling Baroka

It’s official: SA and 10 other African countries will be removed from the UK’s infamous “red list” of travel restrictions at 4am on Wednesday.

Announcing the decision on Tuesday afternoon, Britain’s transport secretary Grant Shapps said all existing testing measures remain in place and would be reviewed in the first week of January.

UK health secretary Sajid Javid told parliament: “Now that there is community transmission of Omicron in the UK and Omicron has spread so widely across the world, the travel red list is less effective in slowing the incursion of Omicron from abroad."

Britain will remove all 11 countries from its Covid-19 travel red list from Wednesday because there is community transmission of Omicron, health secretary Sajid Javid told parliament.

The British government added the southern African countries to its red list in late November, meaning entry was only allowed to UK citizens or residents who must quarantine in a hotel in a bid to slow the spread of the Omicron variant.

Leading scientists cautioned that the level of immunity against the coronavirus among SA’s population due to earlier infections may be masking the severity of illness caused by the Omicron variant.

Since the discovery of the variant in SA and Botswana was announced on November 25, hospitalisation rates in SA have risen, though at a much slower pace than in previous waves, even as cases are rising more rapidly.

Leading scientists cautioned that the level of immunity against the coronavirus among SA’s population due to earlier infections may be masking the severity of illness caused by the Omicron variant.

Since the discovery of the variant in SA and Botswana was announced on November 25, hospitalisation rates in SA have risen, though at a much slower pace than in previous waves, even as cases are rising more rapidly. The number of deaths has also been lower.

A recent seroprevalence survey in Gauteng, where the Omicron variant was first identified, showed 72% of the population had a previous Covid-19 infection, said Shabir Madhi, a vaccinologist at the University of the Witwatersrand. That compares with about 20% when the Beta variant emerged a year ago, said Madhi, who led trials of AstraZeneca Plc’s and Novavax Inc’s shots in SA. — Bloomberg

AfriForum has called on the minister of co-operative governance and traditional affairs to provide evidence that the curfew the government has imposed during the lockdown is rationally connected to slowing the spread of Covid-19.

The civil rights organisation on Tuesday brought an urgent application in the Pretoria high court seeking to have the national curfew of midnight to 4am declared unconstitutional and set aside.

The application comes after Cogta minister Nkosazana Dlamini-Zuma failed to respond to AfriForum’s demands to provide evidence on which the decision to institute the curfew was based.

Health minister Joe Phaahla says the ball is in the public's court regarding this year’s Christmas celebrations.

Speaking on eNCA this week, Phaahla said a lockdown-free Christmas was a possibility but it would depend on the public’s behaviour amid the Omicron variant and fourth wave of Covid-19 infections. Phaahla acknowledged the virus was spreading quicker than in previous waves. However, he said the “silver lining” was that hospitalisations and deaths were relatively low.

He said his department would make recommendations to the national coronavirus command council when they meet on Tuesday.

The national coronavirus command council is on Tuesday afternoon expected to meet under the leadership of acting president David Mabuza to discuss how the government is going to manage Covid-19 over the festive season.

TimesLIVE understands that the government is leaning towards measures that will not further devastate the ailing economy and hamper President Cyril Ramaphosa’s economic recovery plans.

The meeting will be chaired by Mabuza as Ramaphosa continues to recover after testing positive for Covid-19.

Pfizer vaccines protect against the Omicron variant of Covid-19, with two doses offering 70% protection against severe disease and admission to hospital, a large real-world study by Discovery Health and the SA Medical Research Council shows.

Preliminary results of  the world’s “first at-scale real-life study” show the risk of hospitalisation is lower with Omicron infections than with previous variants of concern.

The analysis finds that the “severity of Omicron is 29% lower” among the general population, compared to the first wave of infections, Discovery revealed at a briefing on Tuesday.

Pfizer vaccines protect against the Omicron variant of Covid-19, with two doses offering 70% protection against severe disease and admission to ...
News
5 months ago

Vaccine effectiveness against symptomatic infection from the Omicron variant is likely to be much lower than against earlier variants, but they may still offer substantial protection against severe disease, new analysis suggests.

Billy Gardner and Marm Kilpatrick from the University of California developed computer models incorporating data on Covid-19 vaccine efficacy against earlier variants and initial data on the Pfizer/BioNTech vaccine against Omicron.

Their models suggest early after two doses of an mRNA vaccine from Pfizer/BioNTech or Moderna, efficacy against symptomatic infection from Omicron is only about 30%, down from about 87% for Delta, they reported on Sunday on medRxiv ahead of peer review. – Reuters

‘We’re behind you in our prayers’: Well wishes stream in for Ramaphosa

The presidency said on Sunday that he was receiving treatment for mild symptoms.

Ramaphosa, who is fully vaccinated, started feeling unwell after leaving the state memorial service for former deputy president FW de Klerk in Cape Town. He is currently in self-isolation in the city.

‘We’re behind you in our prayers’: Well wishes stream in for Ramaphosa after Covid-19 diagnosis

For the first time since genomic analysis of Covid-19 became widespread, a single variant is responsible for all cases sampled.

Omicron caused 100% of the 61 cases that came under the microscopes of scientists in the Network for Genomic Surveillance in SA last week.

This emerged from the network’s weekly report issued by the National Institute for Communicable Diseases and comes just three weeks after SA scientists first identified Omicron.

A picture of hordes of people frolicking in waves without social distancing at a Durban beach has sparked outrage and shock on social media platforms.

The image, which has gone viral, was captured on Saturday afternoon when the temperature soared to more than 30ºC.

Many questioned the lack of social distancing and the threat it posed to SA’s battle against the Omicron variant.

The operator of Ghana's main international airport will fine airlines $3,500 (R56,000) for every passenger they fly in who is not vaccinated against Covid-19 or who tests positive for the coronavirus upon arrival, it said on Monday.

The rule comes into effect on Tuesday at Kotoka International Airport in the capital Accra, Ghana Airports said. It follows a health ministry move last week to require all people entering Ghana to be vaccinated.

The measures are some of the strictest in Africa, where vaccine uptake has been challenged by lack of supply and logistical issues even as the new Omicron variant raises concerns about quicker transmission of the virus.

Can I test positive for Covid-19 if I've been vaccinated?

“Vaccine breakthrough infections are expected. Covid-19 vaccines are effective at preventing most infections. However, like other vaccines, they are not 100% effective,” says the US Center for Disease Control and Prevention (CDC).

“Fully vaccinated people with a vaccine breakthrough infection are less likely to develop serious illness than those who are unvaccinated and get Covid-19.

“Even when fully vaccinated people develop symptoms, they tend to be less severe symptoms than unvaccinated people. This means they are much less likely to be hospitalised or die than people who are not vaccinated.”

At least one person has died in the United Kingdom after contracting the Omicron coronavirus variant, Prime Minister Boris Johnson said on Monday, the first publicly confirmed death globally from the swiftly spreading strain.

Since the first Omicron cases were detected on November 27 in Britain, Johnson has imposed tougher restrictions and on Sunday cautioned that the variant could overcome the immune defences of those inoculated with two shots of vaccines.

Britain gave no details on the death other than the person had been diagnosed in hospital. It was not clear if the patient had been vaccinated or had underlying health issues.

EFF deputy leader Floyd Shivambu has weighed in on the price reduction for Covid-19 PCR tests to R500, saying the current price is still too high.

The Competition Commission recently confirmed it has concluded a settlement agreement with laboratory PathCare to reduce its Covid-19 PCR test prices with immediate effect.

The PathCare settlement agreement comes on the back of an official announcement by the commission that two other major laboratories, Ampath and Lancet , have agreed to substantially reduce the price of Covid-19 PCR tests with immediate effect.

Wishing President @CyrilRamaphosa strength and a speedy recovery from the coronavirus.

The Western Cape has officially entered its fourth wave of Covid-19 infections.
News
5 months ago