From 'narcissists' to sex work and Bushiri: Six other times Naledi Chirwa got tongues wagging 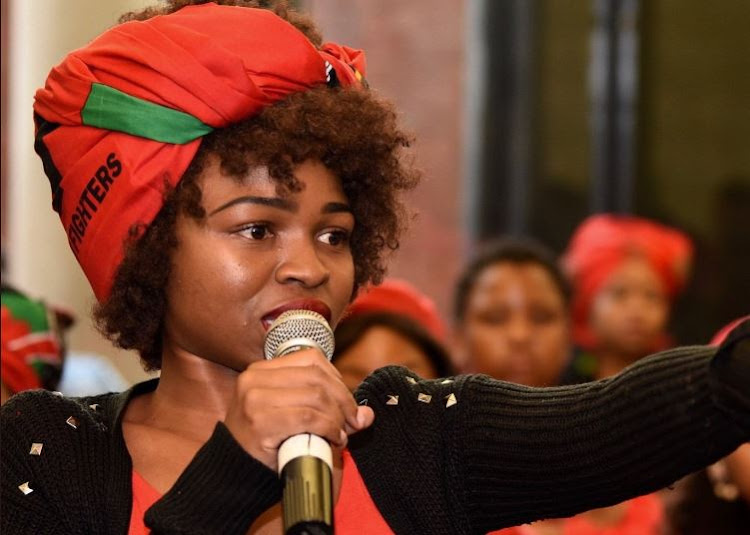 On Monday, Chirwa responded to Ramaphosa’s weekly newsletter, in which he addressed the torching of parliament and the contents of the state capture report, by claiming he is “toothless” and a “weak little boy”.

She made several allegations against Ramaphosa and said nothing would make her respect him.

She later hit back at criticism from people who alleged she is not South African, saying ­“lies” will never silence her.

“You can lie to yourselves about my nationality until you turn green in the buttocks,” she said.

It is not the first time Chirwa has got tongues wagging over her controversial comments.

Here’s a look at six other times her comments sparked debate on the TL:

“I find zero inspiration in narcissistic and envious women”

Chirwa landed herself in a war of words with Ntsiki Mazwai last year after the musician and poet claimed she was more influential than any other woman in the EFF.

Mazwai further claimed she was probably someone who inspired Chirwa in her youth.

“I’m in my youth now and I can tell you for free that I find zero inspiration in narcissistic and envious women who centre themselves while erasing other women activists. You’re a bully, sis’Ntsiki. You erase our agency and our work every chance you get. That doesn’t inspire me at all,” she said.

'You're a bully': Naledi Chirwa sets the record straight about 'drawing inspiration' from Ntsiki Mazwai

Naledi hit back, after poet Ntsiki's claims that Naledi took jabs at her to 'build herself'.
TshisaLIVE
1 year ago

Sex work should be seen as a job

Chirwa sparked debate in late 2020 when she shared a video of herself speaking to a sex worker about the challenges they face in SA.

In the interview, Chirwa claimed poor black sex workers were being harassed by the authorities and community members, and called for change.

She said sex work should be recognised as a job.

While some agreed with her, others claimed Chirwa was promoting prostitution.

Earlier that year, a Twitter user alleged Chirwa was not South African and had obtained her citizenship fraudulently.

The user said she would “one day” expand on the allegations on the social media platform.

Chirwa responded to a follower, calling the claim a “hallucination” and saying it got “10/10 for humour”.

The escape of fugitive Shepherd Bushiri in 2020 saw a video resurface of Chirwa getting a blessing from the controversial “prophet”.

In the video, Bushiri tells Chirwa she will one day become a great leader.

Chirwa can be heard saying: “I receive, Papa.”

EFF leader Julius Malema seemingly weighed in on the video, telling party supporters: “You will do those things of kneeling there before Bushiri because some of you even thank him for taking you to parliament.

“I am not your father ‘Papa Papa Bushiri’. I am not a father of anyone. ‘I receive Papa Papa, I am in parliament Papa Papa’. That is why when you are removed from those positions. You have a difficulty because you want to thank Papa,” said Malema.

The video sparked controversy online; even EFF leader Julius Malema had something to say.
Politics
2 years ago

‘#NotAllMen face the consequences of their actions against us’

In June 2020 Chirwa reacted to the scourge of femicide and gender-based violence in the country by calling for those responsible to be held to account.

In response to the movement claiming not all men were to blame for gender-based violence, Chirwa didn’t hold back.

"#NotAllMen is only applicable if we are talking about men who get to face the law and pay for their actions. Then yes, #NotAllMen face the consequences of their actions against us,” she said.

Maiden speech for the ages

After making a name for herself as a student activist during the #FeesMustFall movement a few years ago, Chirwa was appointed an EFF MP in 2019.

Her maiden speech in parliament impressed many, who praised her for speaking out on the plight of black people.

Corrective rape, the murder of Fees Must Fall activists, women abuse and landlessness were among the issues she addressed in her speech.

It did, however, spark controversy when ANC house whip Bheki Radebe asked her to withdraw her claims on the murder of Fees Must Fall activists, claiming they were unparliamentary.

Poverty, ill-health and corrective rape are among the burning issues addressed by Naledi Chirwa in her maiden speech during the Sona debate.
Politics
3 years ago

Naledi Chirwa hits back at critics: ‘You can lie about my nationality until you turn green in the buttocks’

EFF MP Naledi Chirwa has clapped back at critics amid the backlash over her calling President Cyril Ramaphosa a “weak little boy”.
Politics
5 months ago

OPINION | Young and restless? This is what happens when populism is mistaken as ‘radical’

Whatever the age gap between Naledi Chirwa and Ramaphosa, her cheap shots were irrelevant to the topic of discussion
Opinion & Analysis
5 months ago

Chirwa on Monday morning responded to Ramaphosa's weekly newsletter, in which he addressed the torching of parliament and the contents of the state ...
Politics
5 months ago