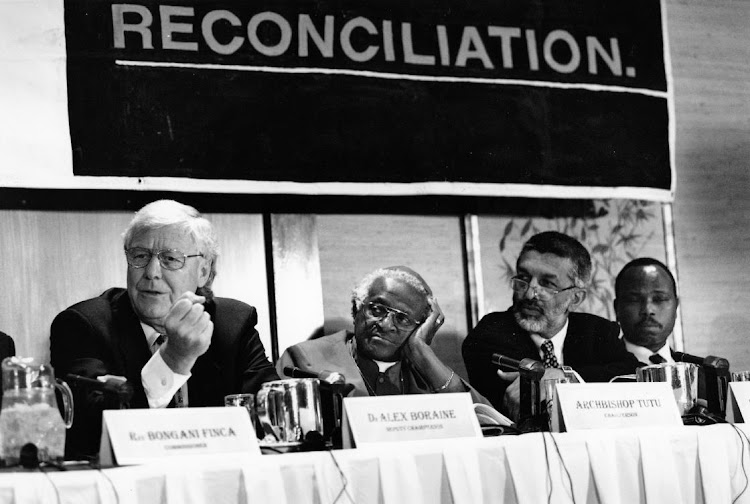 Justice minister Ronald Lamola is considering establishing an inquiry into whether politicians meddled in the NPA's attempts to prosecute apartheid-era crimes which were brought to the fore in the TRC hearings. File photo.
Image: Lori Waselchuk

The government is likely to launch an investigation into claims of political interference in the prosecution of Truth and Reconciliation Commission-related cases.

Shamila Batohi, the national director of public prosecutions (NDPP), told parliament on Wednesday that justice minister Ronald Lamola was likely to establish an inquiry into whether politicians hampered the National Prosecuting Authority's (NPA's) attempts to prosecute apartheid-era crimes and other reasons for delays in dealing with these matters since 1994.

Batohi appeared before parliament’s justice portfolio committee to brief MPs about progress in dealing with these cases. She said they were not receiving dedicated attention for “various reasons” before her time but assured MPs that since she took office in February 2019, there has been no political interference.

Batohi referred MPs to an affidavit by former NDPP Vusi Pikoli who indicated there was interference at that time.

“I would urge members (MPs) to please refer to his affidavit in that regard,” she said.

The crime of apartheid (declared in 1966 by the UN) has largely gone unpunished since SA's transition in 1996. Most perpetrators have either died or ...
News
2 months ago

In May 2015, Pikoli, who was the NDPP between 2005 and 2008, said political interference was to blame for the NPA’s failure to prosecute apartheid-era political murders, torture and disappearances.

Pikoli’s affidavit was filed in support of a court case from the family of Nokuthula Simelane, an Umkhonto we Sizwe operative who in 1983 was abducted by the security branch and brutally tortured for five weeks on a farm in the North West.

“I confirm that there was political interference that effectively barred or delayed the investigation and possible prosecution of the cases recommended for prosecution by the TRC,” he said.

On Wednesday, Batohi told MPs that in the João Rodrigues judgment, the judge directed her to look into possible political interference in the functioning of the NPA at that time.

Rodrigues was a former apartheid security police officer who was charged with the murder of anti-apartheid activist Ahmed Timol in 1971. Rodrigues died last September while trying to have his prosecution for Timol’s death permanently stayed.

One might say we are not moving as fast as we should be, but we in the NPA and DPCI are doing everything possible to ensure these matters get attention. The numbers speak for themselves

“I have been engaging with the minister in this regard and the minister has not taken a final decision yet, but he is looking at a high-level panel or some inquiry to look into the very issue that members have raised.”

Batohi said she hoped the inquiry would help South Africans understand exactly what happened and also ensure there is possible accountability.

“Those discussions are at a really advanced stage and hopefully there will be some notification in that regard very soon.”

The inquiry would hopefully unpack whether there was hampering of the NPA work, she said, adding “but certainly they were not receiving attention, proper dedicated attention”.

MPs across the political party spectrum lamented the delay in prosecuting apartheid-era crimes over the past 28 years. They also wanted more information about the alleged political interference.

Their comments were sparked by Batohi’s reference, in her opening remarks, to politicians who previously “hampered” the NPA’s work.

“We are not going to go into the reasons why there’s delays, why the victims of these crimes have not received justice,” she said.

“We know there is public information around this regarding the lack of action on the part of politicians. The NPA was hampered from doing its work in many ways. Because of all of that, we realise we need to act with a sense of urgency in terms of trying to deliver justice to as many victims, survivors and families as we can.”

It was one of apartheid’s most brutal mysteries. Now we may hear the truth

Court case for abduction and disappearance of MK activist Nokuthula Simelane has, after years of delays, begun
News
2 months ago

Meanwhile, she sought to assure South Africans that there has been progress since the establishment of a dedicated TRC component under her deputy Rodney de Kock. The unit works with the Hawks who investigate the cases.

Previously these cases were attended to by a Priority Crimes Litigation Unit (PCLU) in the NPA, which also dealt with international crimes and crimes related to terrorism and which had “around seven staff members”.

As a result, they have reopened 38 new investigations into deaths of detainees and there are 97 other cases that are being investigated.

Batohi said they were looking at all deaths in detention and not only those where families paid lawyers to investigate and prosecute.

“One might say we are not moving as fast as we should be, but we in the NPA and DPCI are doing everything possible to ensure these matters get attention. The numbers speak for themselves. We are acting with an incredible sense of urgency. We know that time is not on our side.”

Batohi said they were hoping to complete all the cases within three years.

LISTEN | Reconciliation gap in SA is the fault of politicians, says TRC commissioner

After 35 years, apartheid cops in court for murder of Caiphus Nyoka

Meet some of the people who have held the steps of the apex court for more than three weeks, sleeping in the cold to demand reparations for apartheid ...
News
2 months ago

The case of two former apartheid-era police officers arrested in connection with the deaths of three student activists in Krugersdorp nearly 40 years ...
News
8 months ago