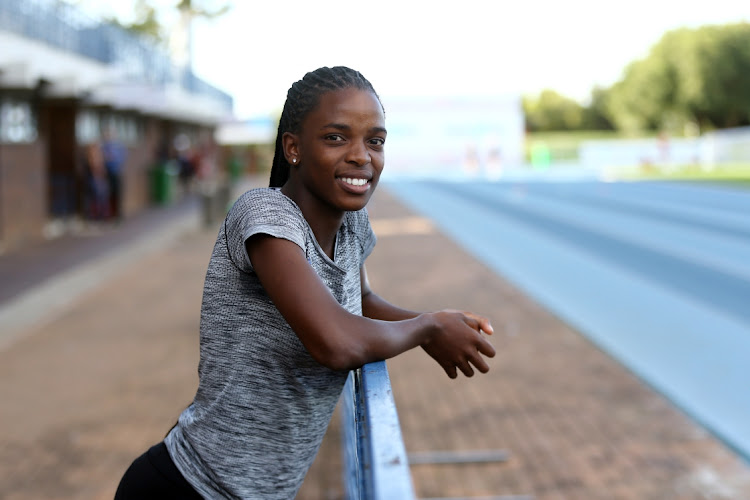 Rising sprint star Viwe Jingqi wants to test herself against established sprinters and give them a run for their money when she lines up at the fourth and penultimate Athletics SA Grand Prix Series in Germiston, Gauteng on Wednesday.

The 17-year-old high school pupil and athlete from Engcobo in the Eastern Cape who has dominated the junior ranks made headlines last week when she set a new SA under-18 100m record with a 11.22 sprint at the Junior and Youth Athletics Championships in Potchefstroom.

Jingqi will launch her senior career at the Germiston leg of the Grand Prix Series.

“I’ve very excited but nervous at the same time because I don’t know what to expect,” she said.

“I want to test myself as people are starting to put pressure on me to keep running fast.

“I think running with the seniors will be awesome and show me where I stand. If you have dominated your age groups you have no other option but to make the step up.”

Jingqi is expected to line up against veteran Carina Horn, who returned from a two-year doping ban to win the women’s 100m race in 11.50 seconds in Potchefstroom.

Horn edged past Phindile Kubheka by two-hundredths of a second followed by Boipelo Tshemese in third with 11.57.

Athletics SA is expected to release the events list on Tuesday.

We caught up with Viwe Jingqi on the grand stand of her stomping ground, Tuks Athletics Stadium. She told @TimesLIVE about her aim to reach the 100m final at the World Junior Championships in Colombia later this year, and her first time meeting Caster Semenya at Tuks, and more. pic.twitter.com/AHdWpGGeDe

Jingqi said she has her eyes set on the senior national championships in Cape Town later this month and wants to use the Germiston event as a launching pad.

“That’s where I will start my senior career,” she said.

“My aim this year is to go to the junior world championships in Colombia and maybe to the finals in the 100m. Well, not maybe. That’s what I’m working towards and if possible I also want to run the 200m. I’m focusing more on the 100m.

“I will race at the Germiston Grand Prix with the seniors and I am going for the national title in the senior champs in Cape Town.”

The grade 12 pupil says it is not always easy to strike the right balance between training, competing and studying.

“It also demands discipline because if you are disciplined and know what you want it’s not going to be that hard.

“Sometimes when I have competitions and tests and fall behind I tell myself that, 'You know you can do this'.”

Carina Horn returned after a two-year gap to snatch a narrow victory in the women’s 100m at the third meet of the grand prix series in Potchefstroom ...
Sport
4 months ago

He was stripped of his World Relays gold medal and condemned to fourth place at the Tokyo Olympics, but Akani Simbine is tackling the new season with ...
Sport
4 months ago

Caster Semenya returns to action with eye on world champs

The women stole the show at the first meet of the newly launched grand prix in Bloemfontein on Wednesday, with Marione Fourie and Zeney van der Walt ...
Sport
4 months ago

With a packed season ahead, the SA sprinter has plenty of opportunity to find his form and make an impact
Sport
4 months ago