Striking players back at work for Zimbabwe’s tour of SA 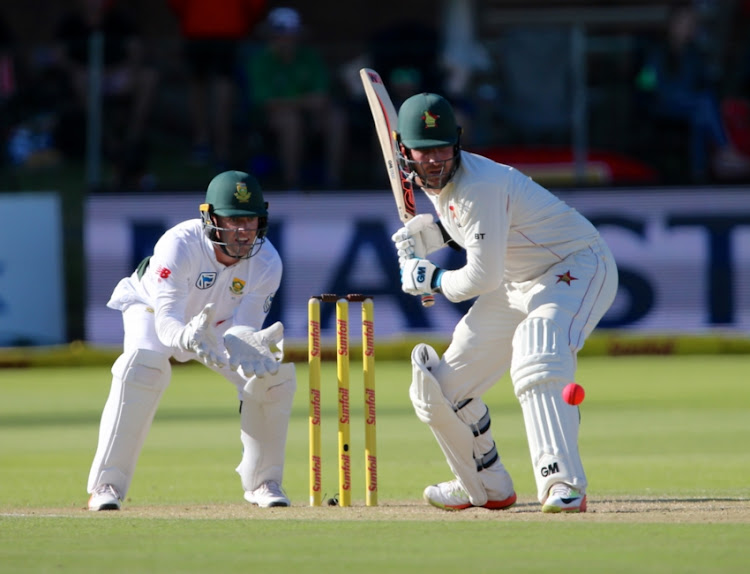 Brendan Taylor of Zimbabwe goes for a shot as former SA wicketkeeper/batsman AB de Villiers watches on from behind the stumps during the Sunfoil Test match at St Georges Park on December 27, 2017 in Port Elizabeth.
Image: Richard Huggard/Gallo Images

Like everything in Zimbabwe‚ cricket strays as far from trouble as a leopard does from its spots.

But the team that should be thrown out of the world game for representing a despotic regime had something to celebrate on Thursday.

Brendan Taylor‚ Sean Williams and Craig Ervine were named in the squad to play three one-day internationals in SA starting at the end of the month. Taylor and Williams are also in the mix for the three T20s that will follow.

Taylor and Williams last played for Zimbabwe in March and Ervine in May. They have cited unpaid salaries for their decision to‚ effectively‚ go on strike.

In June the relationship between Zimbabwe Cricket (ZC) and their players became strained enough for the suits to appoint the straightest talker in cricket‚ Vince van der Bijl‚ as a consultant.

“It will be a tough road for ZC but so worthwhile for all involved — hopefully with the support and investment of all around the game from individuals‚ players‚ and all the way to the International Cricket Council and government‚ ZC and the cricket-lovers in Zimbabwe can turn this around to former glory‚” Van der Bijl said at the time.

“What a thing that will be.”

But even his powers of persuasion didn’t get Taylor‚ Williams and Ervine back into Zimbabwe shirts.

In July they missed a home T20 triangular series against Australia and Pakistan and five ODIs in Pakistan.

Zimbabwe lost all nine of those matches‚ and if they have any chance of putting up a credible performance in SA they will need the skill and experience of the three returning players.

It’s a measure of just how far Zimbabwe have dwindled from the plucky side they once were that‚ even with Taylor‚ Williams and Ervine in harness‚ they lost to the United Arab Emirates in the World Cup qualifiers in March.

But Williams top-scored with a run-a-ball 80 and‚ in Zimbabwe’s previous game — another loss against West Indies three days earlier — Taylor made 138.

Sikandar Raza also wasn’t picked for the SA tour‚ presumably because ZC are still grumpy with him for playing club cricket in England without first securing a no-objection certificate.

Graeme Cremer is recovering from knee surgery‚ but he and Raza have also been at loggerheads with ZC in recent months.

The International Cricket Council have done their bit to negotiate a truce between the administrators and the players by implementing a structured funding plan; essentially imposing debt-counselling for a board mired in chronic financial mismanagement.

Lalchand Rajput‚ who played two Tests and four ODIs for India in the 1980s‚ will undertake his first series as Zimbabwe’s coach since his appointment in August.

What has he got himself into?

To quote Mohammed Shami’s middle stump nine balls after the last drinks interval at The Oval on Tuesday‚ “Clunk.”
Sport
3 years ago