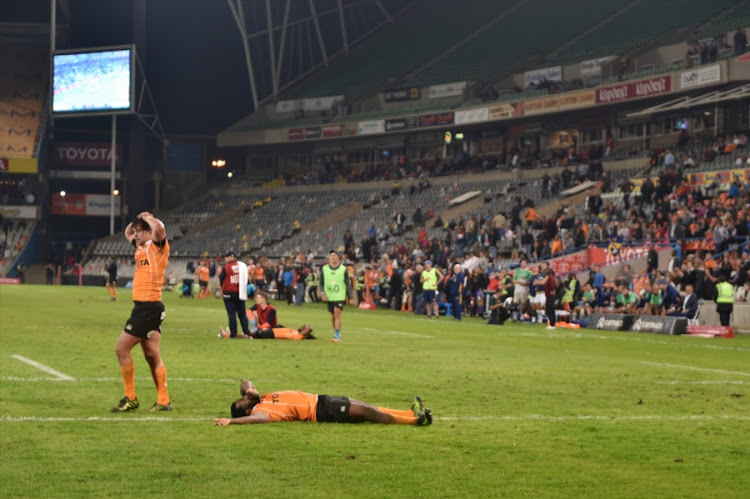 A defeated Cheetahs team with Ox Nche on the ground and Francois Venter (L) during the Super Rugby match against Highlanders at Toyota Stadium on May 05, 2017 in Bloemfontein, South Africa.
Image: Johan Pretorius/Gallo Images

After much speculation SA Rugby on Friday will confirm what has been widely reported over the past two months – that the Southern Kings and Cheetahs will be cut from Super Rugby from 2018.

With decreasing television audiences it became clear the tournament was cannibalising itself‚ as it grew bigger. SANZAAR’s decision to cut three teams (two from South Africa and one from Australia) was a pre-emptive step before the next round of broadcast negotiations start.

If SANZAAR went into those negotiations with a product in severe decline‚ their bargaining position with television companies would be much weaker.

And even though SA Rugby has been through a ‘thorough review’ process to decide on the axed franchises‚ it was always clear the Kings and Cheetahs were in the firing line.

Under SA Rugby’s new structure‚ the franchise committee (which deals with the professional arm of the sport) used a set of six criteria to determine which franchises would be cut.

It’s been a necessary exercise to establish a picture of transparency although the weighting of the six categories was carefully defined so that there would be two obvious losers.

The agreed weighted headline criteria (the weighting mechanism was never made public) were: financial and economic sustainability; sustainable support base; team performance; and stadium and facilities.

These criteria were further broken down in sub-criteria and measurement mechanisms for each of these were also set and agreed upon.

SA Rugby collated the applicable data and prepared a recommendation for the Franchise Committee. It has made a decision on the final four teams.

This proposal has been sent to the Executive Council before it will go to the General Council for ratification on Friday. The Kings and Cheetahs won’t be left to wither and die though.

The Stormers will go into their penultimate Super Rugby pool match against the Sunwolves this Saturday without flank Rynhardt Elstadt.
Sport
5 years ago

SA Rugby has negotiated that the two unions form part of the European Pro 12 competition‚ which involves teams from Ireland‚ Wales‚ Scotland and Italy.

The details of the deal with Pro 12 are still being thrashed out but an announcement on the Cheetahs and Kings’ participation is expected early next week.

The Australian Rugby Union (ARU) meanwhile is still in a bitter dispute with the Western Force and Melbourne Rebels‚ who are the two teams facing the axe in their conference.

One of them has to go but the process has been fraught with threats of legal action from the two franchises.