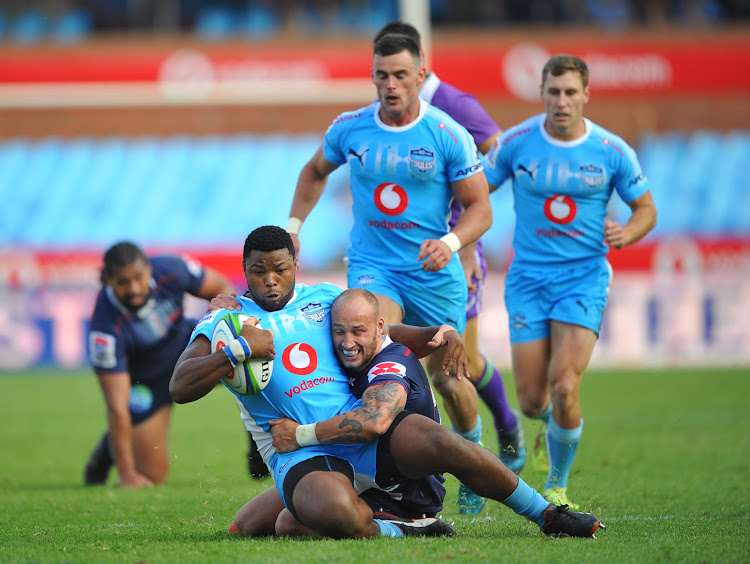 Lizo Gqoboka of the Vodacom Blue Bulls is tackled by Billy Meakes of Rebels during the Super Rugby match at Loftus Versfeld Stadium on Saturday April 21 2018.
Image: Sydney Mahlangu/BackpagePix

The Bulls have lodged complaint with Super Rugby's controlling body Sanzar about what they perceive as deliberate delaying tactics and faking of injuries by the Rebels during their match at Loftus on Saturday.

The Pretoria side beat the Rebels 28-10 to move second on the South African Conference behind the Lions with 19 points and their third victory in a row‚ but the match was spoiled by the Australians’ tactics of slowing the game down.

Only two of the five tries scored on the afternoon came in the second half as the Rebels slowed the game with tactics that contributed to what turned out to be a dull affair.

Coach John Mitchell said the negative style of play by their visitors had the potential to hurt the Super Rugby brand.

“I have taken the strategic option by the Rebels to Sanzar‚” Mitchell said at Loftus as the Bulls continued preparations for the visit by the Highlanders on Saturday.

“I think it was close to 87 seconds the average stop to start. There was something like over 24 stoppages.

"But we will hear from Sanzar what they say about the future of that development and hopefully common sense will prevail.

“We don’t get players faking injuries‚ doctors controlling the speed of the game.... clearly the law that states that player welfare and safety is first and foremost.

"But when it’s faked‚ on a frequent basis and is premeditated‚ for me is not where the game should be going. I hope Sanzar sees the common sense in that area.

"I am not sure that it is good for the product if that continues.”

Match referee Ben O’keefe, from New Zealand, allowed the Rebels players to get away with antics that spoiled the match and Mitchell said he should have stamped his authority and allowed the match to flow.

“You must move the guy to the sidelines and we get going‚ it’s pretty simple‚" he said.

"Get the guy to the sidelines and we play on.

"If you look at the statistics of the Rebels‚ in the third and fourth quarter they fall away because they are trying to last in the game.

"I don’t know if the Highlanders will play that sort of strategy‚ it is not within their mindset to play slowly even though they like to control with the kicking game.”

Rebels coach Dave Wessels admitted after the match on Saturday that they used delaying tactics to try and get advantage.

“Our job is not to come here and entertain the Loftus crowd‚ it is to win for the people of Melbourne‚" Wessels said.

"For me we are a team that is learning and hoping to get better with time‚ the big learning after this match was the improvement we showed in certain areas but we need to keep on working.”