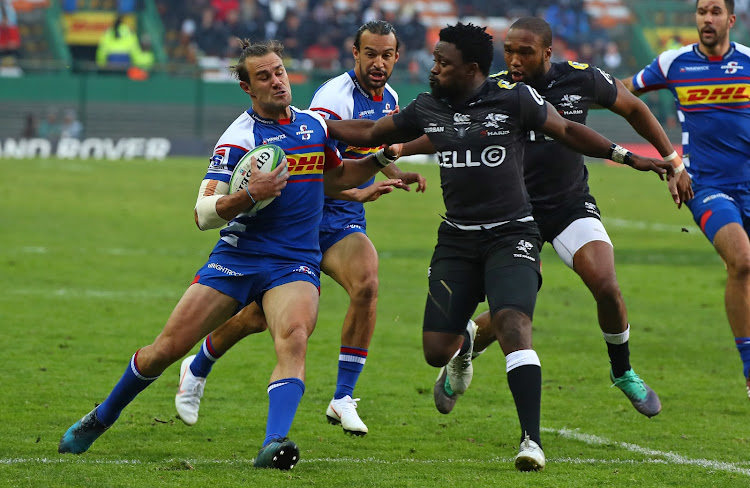 JJ Engelbrecht of the Stormers is tackled by Lwazi Mvovo of the Sharks during a Super Rugby match at DHL Newlands Stadium, Cape Town on July 7 2018.
Image: Chris Ricco/BackpagePix

Sharks wing/fullback Lwazi Mvovo has been called out of the international wilderness and added to the Springboks training squad after some good Super Rugby performances in 2018.

Mvovo‚ 32‚ is one of eight Sharks players added to a training squad that was named last week by coach Rassie Erasmus.

Lions players were not included as they play in a Super Rugby semi-final against the Waratahs at Ellis Park on Saturday.

Mvovo last played for the Boks against Ireland at Ellis Park in June 2016 where he endured a torrid afternoon as the tourists rained high kicks on him‚ which he struggled to handle.

Although former coach Allister Coetzee claimed numerous times that Mvovo was part of his plans‚ the wing never featured again in the remaining 18 months of Coetzee’s tenure.

This recall is a reward for good performances this season‚ but Mvovo is added as cover for the injured Sbu Nkosi.

An ankle injury could rule the latter out of the early stages of the Rugby Championship.

Meanwhile‚ Cobus Wiese and JD Schickerling have both been released from the training camp back to the Western Province Currie Cup team.

But SA Under-20 captain Salmaan Moerat remains with the squad as does Junior Bok flyhalf Damian Willemse.

The Springbok coaching and conditioning staff are managing the workload of the national players after a strenuous Super Rugby campaign‚ which for instance sees resting periods for several Springboks who were involved in the June internationals.