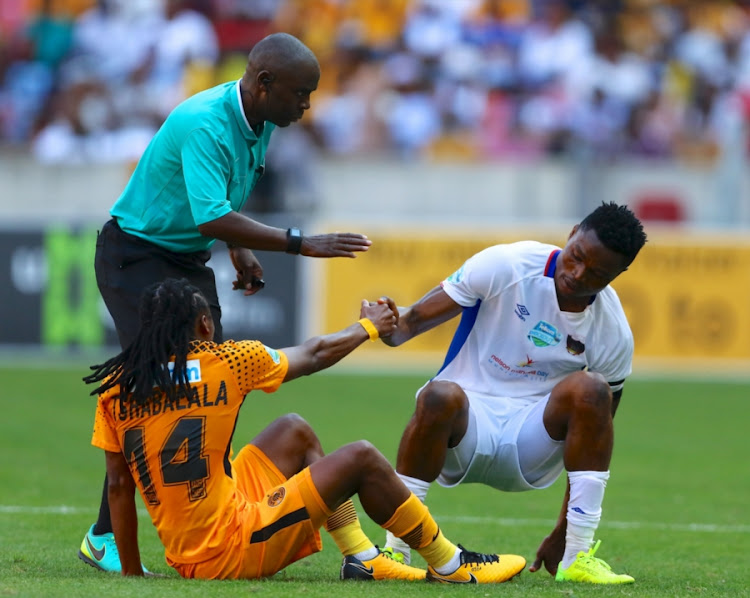 Kaizer Chiefs midfielder Siphiwe Tshabalala is being helped stand up back to his feet by James Okwuosa of Chippa United after the defender fouled him during the Telkom Knockout quarterfinal match at Nelson Mandela Bay Stadium on November 05, 2017 in Port Elizabeth, South Africa.
Image: Richard Huggard/Gallo Images

Bafana Bafana midfielder Siphiwe Tshabalala has arrived in camp but the bad news is that he’s carrying an injury.

Tshabalala is in line to add to his 88 caps when Bafana take on Senegal in a must-win 2018 Fifa World Cup qualifier at the Peter Mokaba Stadium in Polokwane on Friday.

He last played for the national team in 2014.

He was one of a few players who arrived late together with Kaizer Chiefs teammate Mulomowandau Mathoho after they featured in their side's 1-0 win over Chippa United in the Telkom Knockout last eight at Nelson Mandela Bay Stadium on Sunday afternoon.

Tshabalala picked up a hip injury in that match‚ but the South Africa Football Association's (Safa) spokesman Dominic Chimhavi said it’s not serious.

“The coach has decided that Shabba and Thulani Hlatshwayo (who has a toe injury) come off from training.

As TimesLIVE reported earlier on Tuesday‚ midfielder Hlompho Kekana has left camp to be with his family in Gauteng after a tragic car accident that claimed the life of his mother-in-law on Monday night.

Cape Town City striker Victor Obinna is in a race against time to be fit for his side’s top-of-the-table Absa Premiership clash at home to Baroka FC ...
Sport
4 years ago