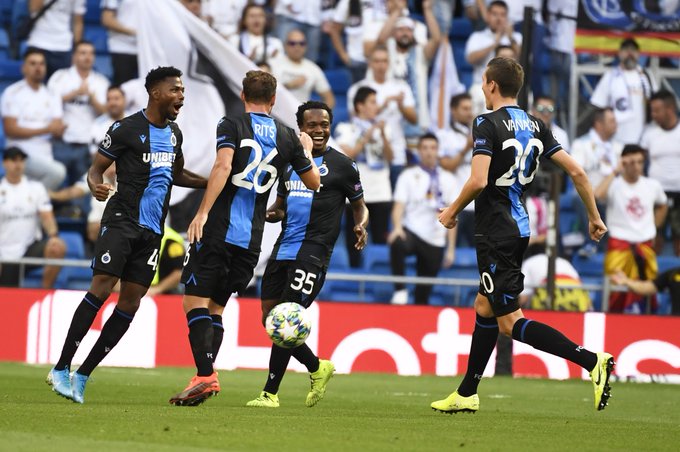 Percy Tau dazzled on the biggest stage in club world football as he inspired Club Brugge to a thrilling 2-2 draw against Real Madrid in a Uefa Champions League match at the Bernabéu on Tuesday night.

Although the Bafana Bafana star forward did not get among the goals on a memorable night with his Belgian club, he was a constant nuisance for the Sergio Ramos-led Madrid backline.

Tau set up the opening goal for Brugge as he beat a Ramos offside trap and pinpointed Nigerian striker Dennis Emmanuel with an exquisite square pass.

Dennis looked to have made a hash of it but somehow managed to fortuitously find the back of the net after the ball cannoned off his leg and rolled past a hapless Thibaut Courtois in the Madrid goal.

Tau was again involved in the second goal shortly before half time and he was unlucky not to score as he forced Courtois into a full stretch dive for a brilliant save.

Completely against the run of play as a frustrated and hurried Madrid bombarded the Brugge goalmouth in search of an equaliser, Dennis broke forward and Tau’s strong run alongside him drew the attention of two defenders, allowing the 21-year-old Nigerian space to shoot as he rattled the net in yet another unorthodox fashion.

It was a first Uefa Champions League match for Tau after missing out in the goalless draw against Galatasaray in the group stage opening match.

Tau looked lively and dangerous every time he had the ball at his feet. He was just too quick and smart for the Madrid defence who they struggled to contain him.

The lively Tau did enough to impress and send a message to coach Philippe Clement that he deserves to start at the highest level of the club world football. He was substituted on the stroke of full time.

Real had a myriad of clear-cut chances but were thwarted by a combination of indecision, bad luck and a resilient defence from the visitors.

The 10-time European champions came back storming in the second half and the unrelenting pressure meant it was a matter of when and not if they will score.

It took them 10 minutes after the restart to score as Ramos headed home to reduce the deficit.

It took another half an hour for the equalizer and another set piece for Madrid as Casemiro out-jumped his marker with a bullet header of his own to make it 2-2 with five minutes remaining.

The Brugge goalmouth was under siege as Real frustratingly searched for a later winner but it was not to be.

The draw left Madrid rock bottom of Group A with a single point after matchday two while Tau's Brugge are in second place on two points behind group leaders PSG.