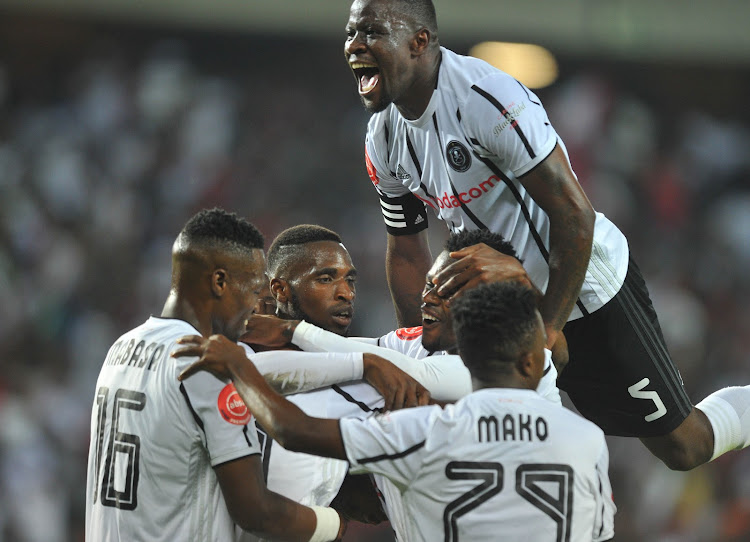 Orlando Pirates registered their third victory in six matches at home this season beating Polokwane City 3-2 in a drama-filled Absa Premiership match at the Orlando Stadium on Tuesday evening.

Both teams deservedly finished with 10-men through the deeds of their players, Thembinkosi Lorch of Bucs and Puleng Tlolane of the visitors.

These players allowed the rush of blood to their heads to get the better of them when they clashed five minutes before the break.

Bucs owe their recovery and victory to referee Masixole Bambiso, who gave them a dubious penalty in the 35th minute for Gabadinho Mhango to cancel out Charlton Mashumba’s 12th minute opener.

Bambiso judged Polokwane defender Nicolas Motloung to have handled the ball in a goalmouth scramble but the replays showed that the ball hit Motloung just above the knee.

Out of the blue Polokwane won a corner kick and opened the scoring when their captain Jabu Maluleke lifted the ball onto the unmarked Mashumba, who headed it past a diving Wayne Sandilands whose attempt to clear the ball before it crossed the line failed.

More drama was to unfold just five minute before the break when Bambiso showed Lorch and Tlolane red cards for misbehavior.

Tlolane fouled Lorch on the right side of the centre line in the 39th minute and just as the Pirates ace was getting up, Tlolane further blasted the ball against him.

Reacting, Lorch pushed Tlolane, who reacted the same way and both players spectacularly fell to the ground.

But their acting skills were not to fool Bambiso, who flashed the red cards in their faces once they gathered strength to get up.

Playing against a Polokwane team which had lost all their last five matches before coming to Orlando, Bucs were expected to pick up maximum points and move into the top half of the log.

Also boosting Bucs’ confidence was the fact that they did a double against the Rise and Shine last season.

They won 2-1 in the first round in Polokwane and thrashed them 3-0 at home in the return match, with Lorch scoring a brace.

Bucs’ home form was not that encouraging ahead of this match.

In five matches they had picked up nine points from a possible 15, the only positive part being the fact that they were yet to give away all three points to the visitors.

The win comes as a relief for Mokwena, whose stay at the helm has been marked by inconsistencies in both league and cup matches.

There were many heroes on the pitch for Maritzburg United in their 2-1 Telkom Knockout semifinal victory over Kaizer Chiefs at the Mbombela Stadium‚ ...
Sport
1 year ago