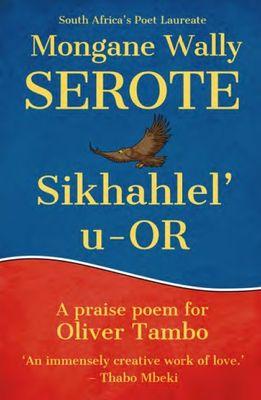 SA’s poet laureate and anti-apartheid struggle veteran Mongane Wally Serote presents an epic poem in praise of the late Oliver Reginald Tambo, president of the ANC from 1967 to 1991.

S’khahlel' u-OR, written in beautiful, incantatory English, has a rhythm and a forward motion that is compelling and meditative. This praise poem touches on OR Tambo’s childhood in Bizana in the Eastern Cape, the struggle, his role in the ANC and his vision for SA.

Released on the anniversary of Tambo’s birth (October 27), this epic poem is a timely reminder of how the ground was prepared for current freedoms.

Mongane Wally Serote is the award-winning author of numerous poetry collections and novels, and a veteran of the anti-apartheid struggle. Throughout his career he received various prestigious awards including the Ingrid Jonker Prize, the Noma Award, the Pablo Neruda Award and the Order of Ikhamanga.

He served as an MP and was responsible for overseeing the construction of the Freedom Park Memorial.

In 2018, Serote was named SA’s poet laureate, a position defined as “the face of a nation’s cultural thought, officially appointed by a government or state institution, a champion for the arts and a voice of the people”.

Serote: ANC gone out of its way to meet SA needs

The ANC has gone out of its way to meet the needs of all South Africans, the Equality Court heard. Poet and ANC veteran Wally Serote told the court ...
Politics
10 years ago

Unity, freedom and selflessness: Ramaphosa at OR Tambo memorial lecture

An ode to my grandfather, Oliver Tambo

The 2003 tragi-comedy film Big Fish, based on the 1998 novel of the same name by Daniel Wallace, contains the line: "There are some fish that cannot ...
Opinion & Analysis
4 years ago

Keorapetse William Kgositsile, poet whose pen led us to righteousness

A few weeks ago, the slight, compact, bearded figure in sombre attire and a sailor's cap entered the Parktown eatery where I was seated for lunch, ...
Opinion & Analysis
4 years ago