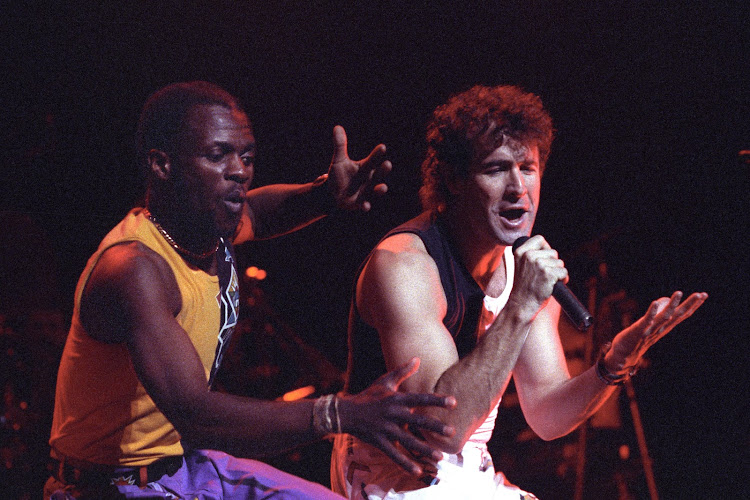 "One day when you wake up I will have to say goodbye," sang Johnny Clegg in Cruel, Crazy Beautiful World, a track he wrote for his son, Jesse, in 1990.

Sadly, that day has come — the musical icon, passionate philanthropist and anti-apartheid activist passed away on Tuesday following a long battle with pancreatic cancer.

Here are some things you might not know about Clegg, who, for four decades, enthralled local and international audiences with his incredible music and energetic stage performances:

1. CLEGG WAS AN SA ICON, BUT HE WASN'T BORN IN MZANSI

Clegg was born in Bacup, England, in 1953. He immigrated to South Africa when he was seven years old.

2. AN ERRAND TO BUY BREAD CHANGED HIS OUTLOOK ON LIFE

When Clegg was 14 years old, he was sent on a errand to buy bread and milk. Along the way he heard cleaner Charlie Mzila playing his traditional Zulu guitar and was captivated by the sound.

He asked his new acquaintance to teach him to play the instrument in the maskandi style. Mzila agreed and also taught him the art of Zulu stick-fighting, traditional Zulu dance and how to compose maskandi music.

The pair became firm friends, formed a dance team and performed at hostels across the City of Gold.

"He [Mzila] opened a whole new universe for me," Clegg told The Sunday Times.

And in turn, Clegg and his bands Juluka and Savuka opened a whole new universe for the world with their fresh crossover sound that blended English and Zulu music.

3. HE CREDITED SCATTERLINGS OF AFRICA AS A GAME-CHANGER

When Clegg and Sipho Mchunu first formed Juluka, they continued to work their day jobs as a lecturer in anthropology at Wits and a gardener, respectively.

In 1983, their arguably best-known song, Scatterlings of Africa, made the top 50 charts in the UK. If it wasn't for this, "I would still be making music on the side and lecturing — it's as simple as that," Clegg told The Sunday Times.

WATCH | The music video for 'Scatterlings of Africa'.

This hit track was also featured on the soundtrack to the Oscar-winning movie, Rain Man.

4. THE WHITE ZULU WAS HUGE IN FRANCE

Clegg amassed a loyal legion of fans in France. In fact, they were the first to dub him Le Zoulou Blanc, giving rise to his famous nickname, The White Zulu.

At one point in his career, Clegg's music was outselling Madonna and Michael Jackson's in France. Rumour has it the King of Pop was forced to cancel a concert after it was discovered it would clash with one of Clegg's performances.

Not surprisingly then, Clegg won the Le Victoire French Music Industry Award for having the biggest-selling world music album in France on two separate occasions in the late '80s and early '90s.

Given his popularity in France, it's no wonder the French government declared Clegg a French cultural "knight" in 1991, when they bestowed him with the honour of the Knight of the Order of Arts and Letters (Chevalier dans l’Ordre des Arts et des Lettres).

The SA government formally recognised the many ways he'd made Mzansi a better place by awarding him the Order of Ikhamanga (Silver) in 2012.

According to the Presidency's website, he was given the honour for his "contribution to and achievement in the field of bridging African traditional music with other music forms, promoting racial understanding among racially divided groups in South Africa under difficult apartheid conditions, working for a non-racial society and being an outstanding spokesperson for the release of political prisoners."

More recently, he was included on Queen Elizabeth II's Birthday Honours List in 2015. Clegg was made an Officer of the Order of the British Empire (OBE) in recognition of his "unique services to the arts, vulnerable people and children, and to democracy in SA".

Despite achieving international fame and success, Clegg was only ever nominated for one Grammy —  Savuka's Heat, Dust and Dreams was up for the Best World Music Album award in 1993.

Clegg might not have taken home a golden gramophone, but that doesn't mean he was short of trophies. Some of his musical accolades include winning Best World Music Album for Heat, Dust and Dreams at the 1994 Billboard Music Awards and Best African Group at the 1998 KORA All Africa Music Awards.

Collectively called the Friends of Johnny Clegg, their aim was to pay tribute to the veteran musician's life and work, as well as to raise money for The Click Foundation, a digital literacy charity for primary school children.

8. ONE OF CLEGG'S LAST SINGLES WAS WRITTEN BY HIS SON

As mentioned above, Clegg wrote Cruel, Crazy Beautiful World for his son, Jesse, when the boy was just two years old.

Jesse grew up to follow in his dad's footsteps, becoming a successful musician. In 2017, he wrote a moving song for his father called I've Been Looking, which was included on his dad's final album, King of Time.

On Twitter, Jesse paid tribute to his dad, writing "You have inspired me both as a musician and as a man, and given me the tools to live a meaningfully life. I will miss you deeply and I struggle to image a world without you. But I am comforted to know you wisdom and compassion lives on in all of us",

WATCH | Johnny Clegg and his son, Jesse, perform 'I've Been Looking'; the track Jesse wrote for his father.

Johnny Clegg died surrounded by loved ones on Tuesday.
TshisaLIVE
2 years ago