It's also unlike any machine ever produced by the manufacturer 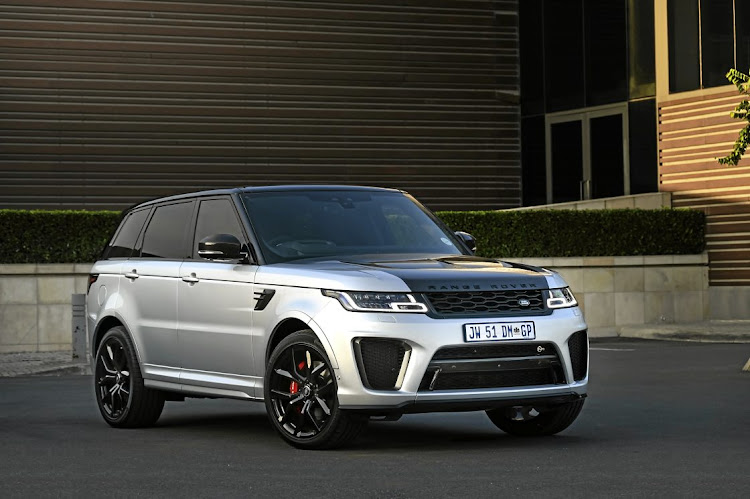 A Range Rover equipped with motorsport-inspired hardware seems so very anti-establishment. It totally shatters the haughty, aristocracy-type connotations often reserved for the larger sport utility vehicles from the brand.

You could liken such a creation to the act of a young royal family member leaving the clan and marrying an American superstar, shunning tradition and pulling a finger to the consequences.

Yes, the Range Rover Sport SVR Carbon Edition is unlike any machine ever produced by the manufacturer. And probably something not to be repeated.

Of course, the firm has birthed its share of high-performance wares over the years, but this just takes things up all the way to the stratosphere, with a character that makes the poor ozone layer wince every time you fire up the start button.

Enjoy the rawness of it all, because like all automakers that matter, the company is rapidly heading in the direction of full electrification.

There was a time when sports cars were made light and low for maximum handling benefit, but the rise of SUVs has led to some owners wanting their ...
Motoring
1 month ago

Expect its first fully-electric contribution as soon as 2024. As you know, sister company Jaguar already launched the zero-emissions I-Pace in 2019.

It would not be remiss to say that future performance-focused, battery-powered Range Rover models will not be slow, because by now we all know about the instantaneous power delivery associated with electric vehicles. They are just going to be a whole lot quieter.

You know the Carbon Edition is something to give way for when you see the bulging couplet atop its bonnet. The centre section of said bonnet, as the name would imply, is finished in carbon fibre. We should really just get this out of the way now — the material is splashed virtually everywhere. You will find it under the hood, on several parts of the body and in numerous sections of the interior.

Does that make it dramatically lighter than a regular SVR? Depends on who you ask. The technical information lists both vehicles as having an unladen weight of 2,377kg.

But with all the mass-saving measures employed on the Carbon, including seats that are 30kg lighter than those in the other vehicle, it ought to make a slightly smaller dent on the scale.

Those seats deserve a special mention. They are grippy, generously bolstered and with superb lateral support for livelier cornering. A strange sensation versus the throne-like arrangement you would find in a normal Range Rover Sport. 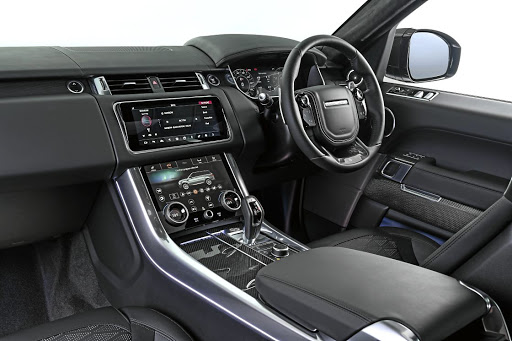 The interior of the Range Rover Sport SVR Carbon Edition. A 19-speaker Meridian sound system is part of the package.
Image: Supplied

What also might be a strange sensation, at first, is the boundless verve with which such a hefty machine reels in the horizon.

After all, this is a vehicle that, when on its tippy-toes thanks to an off-road suspension setting, has a ground clearance of 274mm.

A standstill to 100km/h sprint time of 4.5 seconds is still quick by most standards. Yes, even if we are now in an era where cars like the Porsche Taycan Turbo S can silently shoot that benchmark speed in 2.8 seconds.

But where that would run out of ideas at 260km/h, the lumbering Range Rover will keep going to 283km/h. Something we never tried, but we imagine it must err on the frightening side, given the height and boxy properties of the vehicle.

So let us compare apples with apples. The rival from BMW, the X5M Competition, will perform the 0-100km/h dash in 3.8 seconds and top out at 290km/h.

But its muzzled acoustics are completely trumped by the incredible vocals of the SVR. Jaguar Land Rover are known for feral, truculent and unfiltered eight-cylinder acoustics. They make cars with soul.

This is no different. It is also the most powerful engine to be fitted under the hood of a Land Rover. The familiar supercharged 5.0-litre unit produces 423kW and 700Nm, as it does in applications like the Jaguar F-Type R.

A 19-speaker Meridian sound system is also part of the package, once you tire of abusing the loud pedal.

And that, for me anyway, happened after about 200km of spirited driving. After the in-depth exploration of its (obvious) sporting competencies had been concluded, the SVR lived life in the middle lane.

It may as well have had the lesser 3.0-litre, six-cylinder, turbocharged-diesel engine under its prow, given the judicious and conservative way in which it was being piloted.

A beady eye and restraint is needed in real-world driving conditions, because those respective 60km/h, 80km/h and 120km/h speed limits approach faster than you can say SVR.

And even when driven sedately, the best consumption we extracted was 14.7l/100km.

Not frugal, especially in light of what go-juice currently costs at present, not far off the R20 mark per litre. Filling up its 104-litre tank is no joke.

Come to think of it, aside from the stated reasons, Carbon Edition is a pretty apt title for this Range Rover, bellowing 294g/km. Or about 4.5 times the amount emitted by the plug-in hybrid version of the Range Rover Sport, with its 2.0-litre, four-cylinder, turbocharged petrol and electric motor setup.

The SVR is an awesome piece of kit, if somewhat anachronistic in our evolved world.

Fastest Range Rover ever is confirmed for SA

Land Rover on Wednesday confirmed that its rapid new Range Rover Sport SVR Carbon Edition will be touching down on our shores in the fourth and final ...
Motoring
9 months ago

If you're a stickler for luxury then the new 2021 Range Rover SVAutobiography Ultimate and Dynamic Edition models will certainly pique your curiosity.
Motoring
1 month ago
Next Article