The latest expression is replete with a list of subtle revisions 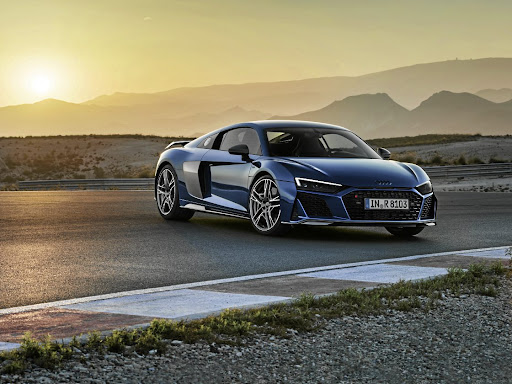 Audi was enjoying a renaissance of sorts when the first-generation R8 launched on local shores in 2007.

Not only had a sharper aesthetic flavour pervaded the range - punctuated by lighting technology that rivals only latched on to later - there was also a smidgen of lunacy to its performance offerings.

Consider, for example, that the S6 and RS6 of the era packed a 5.2-litre V10 engine, claiming kinship with the exotic Lamborghini Gallardo.

The same mechanical heart would make its way to the heroic R8 flagship, which was first available with the 4.2-litre V8 motor employed in numerous other models in the range. Here it packed 309kW and 430Nm, thrusting the wedge-shaped coupé to 100km/h in 4.6 seconds, with a six-speed manual gearbox on duty.

By modern standards it's a sprint time easily bested by middle-tier hot hatchbacks, but back then it was quite something. Still, the mystique of the R8 extended far beyond numbers. Certain details cemented a deserved place in the company of pedigreed contenders such as the Porsche 911 and Aston Martin Vantage.

Having the engine placed in the middle afforded it an edge in the balance department, but also made quite a visual statement: the sight of it through the rear window was pure majesty. And the gated shifter of that six-speed transmission, precision-milled from steel, is the kind of feature that prompts cold showers. When the open-air Spyder version arrived in 2010, it added yet another layer of desirability.

And then there was the hype created by product placement. It's worth remembering that the RSQ concept, a precursor to the R8, featured in the 2004 Will Smith film I, Robot. The R8 was the star car in Iron Man of 2008, kicking off an unforgettable association with Tony Stark that was sustained through the franchise and extended to other Marvel titles.

Now the R8 is in its second generation, having retained the recipe of the original, aside from the culling of the eight-cylinder engine choice. Earlier this year the updated model arrived in SA, available exclusively in V10 Performance specification.

Sadly, no rear-wheel drive derivative, as is sold abroad. And before you accuse the R8 of not moving ahead with the times, note that an all-electric R8 E-Tron was available (not locally) from 2015 to 2016, axed ostensibly due to slow uptake.

But you can bet there will be a sequel on that front: the electrification push is not something Audi plans to relent on anytime soon, like virtually all carmakers. For now, though, we opted to revel in the 10-cylinder symphony that defines the current, fossil-fuelled R8. Its aluminium-intensive body and sharp silhouette still rouses wonderment and affection, as a supercar ought to. Even when licked in a typically conservative shade of grey.

Compared to the 2016 model, the latest expression is replete with a list of subtle revisions, including a wider, flatter front grille, larger inlets, a meaner rear diffuser and new oval pipes — just for show, though, because a smaller set of functional pipes can be seen housed within. Emissions regulations and all that. Dare we say, the new car seemed to have a slightly muzzled acoustic character versus the last interaction with an R8 had in 2017. 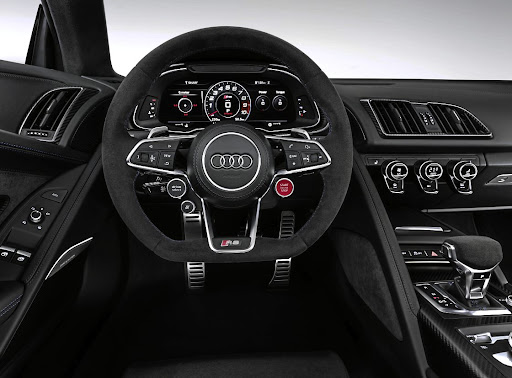 Behind the wheel of the R8.
Image: Supplied

Still, the presence of the 5.2-litre motor behind the passenger compartment is very much felt. Especially during a cold morning start-up, where it shatters the silence as it barks into life, before settling as warmer temperatures are reached.

Output figures of 449kW and 560Nm remain impressive, as does the drama of executing a dash to 100km/h — this will take 3.2 seconds. The launch-control function is easy to use. A brief chirp as the all-wheel drive system gains purchase is followed by a kick in the back as it gets to those three digits.

Cars on the southernmost tip of the continent work hard. And despite the midday North West heat, the R8 took several launch starts in close succession with nary a hiccup, with the air-conditioner on and blower set to maximum.

Quattro means prodigious grip even with the intensity of the electronic aids set to reduced functionality. The Michelin Pilot Sport 4S rubber (245/30/ZR20 front; 305/30/ZR20 rear) displayed not even a hint of break in traction as we hustled through the sweeps of provincial backroads at a fair rate of knots.

You would need a closed circuit and wide spaces to cross the limit of adhesion in the R8, or to achieve massive, smoky four-wheel drifts. It is an extremely forgiving machine to pilot quickly and confidently.

Call it age, but ingress and egress proved a little less graceful than on that occasion five years back. While the cabin is expectedly snug, supportive seats (heated) and upholstered in quilted leather ensure correct posture, biased towards an upright position.

Virtually all functions are centralised to the driver, operated through the Multi Media Interface (MMI) based inside the instrument cluster. But you can tell that the R8 hails from an older crop of Audi produce, given the button-intensive layout of the centre console. Said buttons operating with the satisfying, tactile click for which Audi is known when it comes to switchgear.

There is nothing concrete on how the next instalment of the breed will morph. Will it be a hybrid? Or throw internal combustion out altogether in favour of complete electrification? In either case, the current R8 and its genesis are going to be referenced for a long time to come.

Not only for their obvious technical achievements, but also for what the nameplate did from a brand equity perspective. Because before it arrived, the summit of their expertise in sports car development was the TT. Which was cool, but hardly a bedroom poster car.

Manufacturers are setting the limits progressively higher as the years trot by. When I refer to limits I’m referring to that magical envelope where ...
Motoring
3 months ago

Two things weigh heavy in the back of my mind whenever I get a high-powered sports car to drive. The first is the frighteningly real threat of jail ...
Motoring
4 months ago

In March Audi Sport launched what can only be termed as a gluttony of high-performance wares. If the aim was to send the equivalent divisions, BMW ...
Motoring
4 months ago