Who would have thought weeks would turn into months of no alcohol? With the drought about to be broken, booze sellers and producers have already seen a massive boost in orders 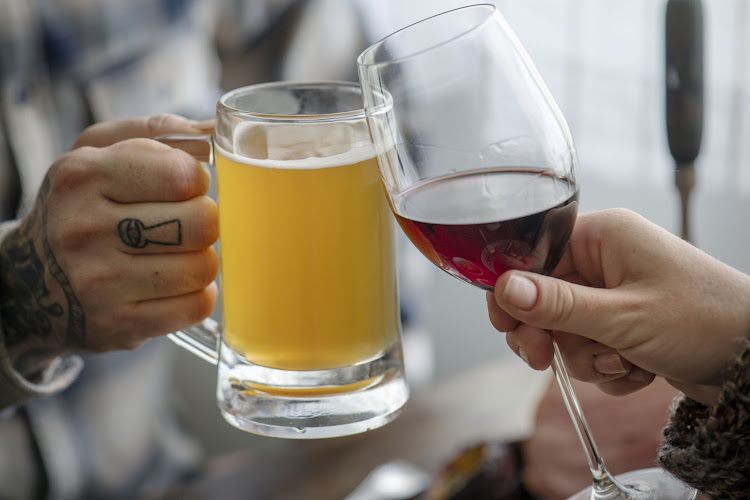 Cheers to the end of the booze ban!
Image: 123RF/rawpixel

I fancy a nice boozy, citrusy flavoured gin, a double tot of the craft variety, topped with a premium tonic, not too much ice and a slice of orange. And a bottle of good red wine. That’s my wish list when the ban on the sale of alcohol is lifted on Monday.

A recent Sunday Times online survey asked readers what the first tipple they were going to buy when the bottle stores reopened was. The perennial favourite beer tops the list, followed closely by wine, next came spirits, followed by coolers and, limping in at the bottom, bubbly — perhaps a reflection of the grim mood in the country, empty pockets or both?

Skip the bottle store queues: where to pre-order your alcohol online

For the beleaguered wine industry there’s a glimmer of hope, says Sunday Times Lifestyle wine columnist Wade Bales. He believes that during lockdown, those who had a stash of wine had been drinking it more regularly.

He’s upbeat about the “massive demand” for the wines he sells online and orders are mounting. So much so that Bales has created a “drive through” concept at his Cape warehouse where customers can collect their orders without getting out of their cars.

“Customers,” he says, “are ordering bigger volumes than in the past and are taking no chances of being caught off guard like before lockdown.”

Local beer companies in Cape Town say pre-order online sales have gone through the roof as level 3 of lockdown approaches on June 1 2020. As well as the birth of an online sales market, some breweries have had a record month selling nonalcoholic beers during lockdown. TimesLIVE takes a look at what local breweries, like Jack Black, are doing to stay afloat.

Bales has been enjoying the wines from his cellar during the ban but says he’s starting to scratch around too. “I’ve tucked into wines I really would have opened in three to four years,” he says. And top of his shopping list, once bottle stores reopen, is a “high quality local cap classique”.

Bernhard Veller, owner of Nitida Wine Farm in Durbanville Hills in the Cape, echoes Bales’ sentiments. “The farm has received a huge amount of orders in the last month, and probably as many from private individuals as commercial ones,” he says, adding that it’s encouraging to be getting orders from new customers.

And Veller is feeling a shift in sentiment thanks to the upswell of support for local producers. “Those who would normally buy wine in a bottle store are buying directly from us,” he says, “and their orders are bigger than before”. The biggest demand is for the farm's sauvignon blanc, merlot and their award-winning pinot noir.

Veller may be a wine farmer with unlimited access to his wares, but he can’t wait to savour a whiskey, the first he’ll have had since the lockdown started.

And where does the end of the alcohol ban leave the pineapple industry? This humble fruit had become a beacon of hope for housebound home brewers who, using sugar, water and the oomph of yeast to spark fermentation, had been turning it into a drink with quite a boozy kick during lockdown. For pineapple producers, this trend has meant it’s been a bumper season with unprecedented sales and prices.

Charles de Bruin of Gwanzi Queen Farming in KwaZulu-Natal, where most of the pineapples grown are for fresh consumption, unlike in the Eastern Cape where they’re produced for canning, has a different take. He says it’s not the farmers who’ve scored during the pineapple frenzy as much as the middleman. It’s those nameless go-betweens between the farmers, produce markets and sellers who’ve been rubbing their hands with glee.

That said, he adds, it’s been gratifying for farmers, who have suffered many years of drought, to receive a record high price of R250 a box for pineapples for a magical, midseason window. It’s also been rewarding for them to see their produce being used in new, inventive ways.

GOT A COOKING QUERY? GRILL HILLS

In a cookery quandary, have a problem with a recipe, bogged down by measurement conversions, or baffled by an ingredient? For sound advice, Sunday Times Food editor Hilary Biller is at your service. Send your queries to food@sundaytimes.co.za, and if yours is selected, we'll answer it in an online article.

'The Lazy Makoti's Guide to the Kitchen' by Mogau Seshoene has just been reprinted for the seventh time.
Lifestyle
2 years ago

Eight secrets to cooking up the most flavourful winter stew

A good stew will satisfy any hunger, big or small. Follow these simple cooking tips to take yours to the next level of deliciousness
Lifestyle
2 years ago

With a simple recipe, minimal equipment and a surplus of apples you can make a delicious sparkling apple cider that'll be ready to drink in a day or ...
Lifestyle
2 years ago