This Waterberg lodge's the perfect spot for joining the latest Insta-trend: the #poolellie

Mhondoro Safari Lodge & Villa, just 2.5 hours from Johannesburg, is exclusive and trending at the same time, thanks to Zodwa Kumalo's selfie with an elephant 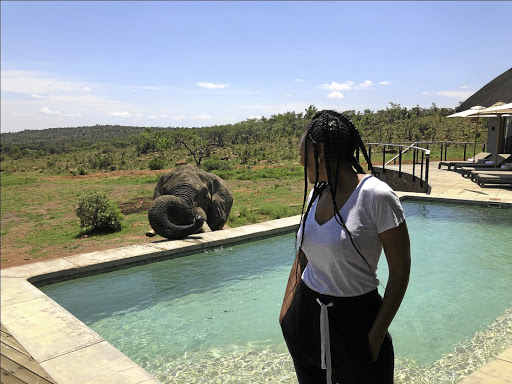 Seeing a lion on the hunt would have been a thrill but the writer's #poolellie at Mhondoro Safari Lodge & Villa - well, that makes a delicious memento.
Image: Zodwa Kumalo

There is no shortage of five-star game lodges in South Africa. Locals treat themselves to luxurious sho't lefts at the whiff of a long weekend. International visitors make pilgrimages
to stay at some of the best game lodges this country has to offer.

When you're so spoilt for choice, applying the Big Five filter is probably the quickest way to narrow down your options. And Mhondoro Safari Lodge & Villa, situated in the Welgevonden Game Reserve in Limpopo, has all five - and more.

"So, which is your favourite from the Big Five?" game ranger Ryan Smart asks after picking me up from the main gate.

Book a stay at Sanbona, one of the Western Cape's premier game reserves

It's a pleasantly hot day in January. I feel he really wants to ask me which one I most want to see and I really want to answer: "A lion killing something." But instead I say "elephant" to be polite. It's not a lie.

These magnificent, intelligent creatures are so graceful and appear so gentle in their lumbering movements that you imagine you could reach out and touch them.

As we approach the lodge we are greeted by staff singing warmly, holding out cool, damp cloths to freshen up with and a glass of chilled fruit juice. All thatch and light wood and hanging woven baskets, the lodge perfectly blends into its surroundings.

Dial back to 2013, a fire destroyed the main lodge, stalling operations for two years after Dutch couple Frank and Myriam Vogel had acquired it in 2008. Fortunately, no one was harmed and it also gave them the opportunity to rethink the lodge offering and do a big overhaul of the look and feel of the place.

Fast-forward to me sipping on a cocktail in the game-viewing hide/bar/eating area while snapping images of a rhino and her young calf, which are sipping from the water hole a few hundred metres away. Being in such close proximity to the wild animals is quite surreal.

From the poolside and suites you can see all the game approaching the hole. And when one of the big five manifests, all the guests rush from their rooms or abandon their dining or swimming to head to the service station, which takes you to a flight of stairs leading to the underground tunnel and the hide.

As you head through the dark, 65m-long tunnel, sensors automatically illuminate the way, revealing walls decorated with framed images of the game the
Vogel family, professionals and guests have photographed. Essentially, it's a cleverly thought-out passageway, which connects
the main lodge to the watering hole - undoubtedly Mhondoro's trump card.

How Sanbona Game Reserve is clawing back this beautiful African land

Buying up farmland and restoring it to its formerly wild state - with lions and cheetahs to boot - is the great mission of this reserve in the ...
Lifestyle
2 years ago

The lodge itself, with its distinctive African artefacts, also infuses the classic, pared-down Dutch interior design style and touches of a vintage nature. Earthy tones create an inviting and warm energy in the suites and main areas, such as the dining, reception and swimming areas.

The pièce de resistance is the three-bedroom luxury villa. Complete with its own kitchen and private chef, private game ranger, gym, yoga room and heated pool, it's a short stroll from the main lodge but feels completely separate.

UP AT THE VILLA

Unexpectedly, I got a tour of the villa when its gracious guests invited everyone at the main lodge to view the herd of elephants heading towards them. A group of us had just returned from a late-afternoon game drive, where drinks and snacks had been set up on a table overlooking some of the best views of the reserve - all verdant green hills and impressive rocky ravines and sweeping savannahs. 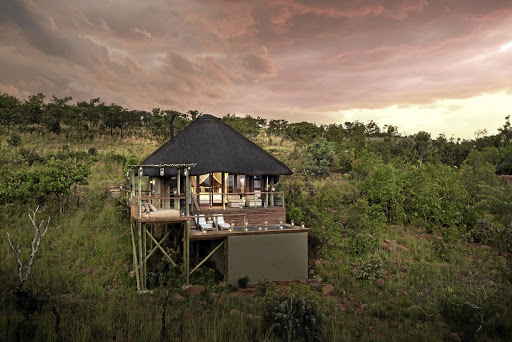 The three-bedroom luxury honeymoon suite boasts an atmosphere all its own.
Image: Supplied

With torches in hand we followed the herd, led by the matriarch, to the saltwater swimming pool at the villa.

After taking a sip, and apparently deciding it was too salty, the group of about six to eight elephants ambled quietly over to their second option.

But for the occasional splashes of water, which could be mistaken for skinny-dipping guests, standing still with your eyes closed you would never have heard them approaching - the only giveaway being perhaps the whoops of joy as guests tried to capture the moment in the inky darkness, the frames of the elephant lit only by the pool light.

On the subject of elephants, Myriam shares on the family blog that the now 45-year-old Daisy, the matriarch elephant, fitted with a GPS transmitter a number of years back, leaves her herd to act as maternity aid whenever a new baby elephant is born.

The elephant population is understood to double every 10 years, which has a huge impact on biodiversity. Tracking and monitoring the movements of these gentle giants is part of the elephant management plan which has resulted in translocation and contraceptive vaccinations to slow down the population.

Reportedly, Welgevonden has the largest concentration of white rhinos on private land and is 100% poaching-free, according to marketing manager Ronel Breytenbach, who has been with the lodge since 2016.

This is thanks to a highly effective anti-poaching unit, the existence of which is communicated to drivers by signs on the N3 warning of its armed presence.

In 2016 Welgevonden Game Reserve, together with Mhondoro and Frank Vogel, announced the establishment of a R30m game purchase, increasing the existing population with more impalas, wildebeest, zebras, waterbucks and hippos. This was the culmination of many years of academic research into the nutritional conditions on the reserve. Last year black rhinos were introduced onto the reserve, which we unfortunately didn't spot.

While bumping along in the game vehicle on day, we approach a zeal of zebra grazing (yes, that is in fact the collective noun for zebra). 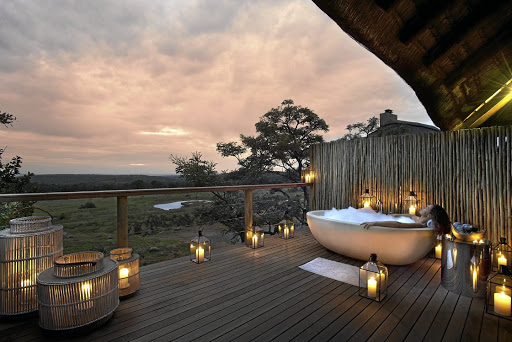 Have bubbles with your exquisite bush views on the deck at the lodge's Spa Suite.
Image: Supplied

We park the vehicle alongside the still creatures and watch as they graze while keeping a
side-eye on our movements in the vehicle. The game ranger climbs out to illustrate research currently being conducted at the reserve. As he approaches the zebras on foot, the entire herd scatters as if a shot has suddenly been fired.

The reaction is fascinating and one that has been closely monitored by Welgevonden. According to international news organisation Quartz, IBM and
MTN began a new data-analysis programme to prevent rhino poaching.

Zebras, as well as other species, have been fitted with collars to track their movements and responses to danger. This data has been collected and analysed to show that animals move differently depending on the threat they are facing.

"For example," writes Quartz, "they're likely to move as a herd if a lion approaches but scatter chaotically if a hunter with a rifle is spotted. Their response time is also usually much faster than a one-ton rhino's."

Such observations and insights into animal behaviour are exactly what characterises a stay at Mhondoro. The knowledgeable staff - from the front-of-house manager to the rangers - also armed me with more than I knew or cared to think about going in.

Whether you want to go by foot, bike or boat, SA has the perfect location - here are just three
Lifestyle
1 year ago

So it was only fitting that when we were bidding the lodge farewell, a young elephant
strolled into the main lodge to drink from the eco-friendly swimming pool, presenting me with the perfect opportunity to take a #poolellie - a selfie with an elephant - a special parting gift that has given Mhondoro global Insta-fame. Check the hashtag out for yourself on Instagram if you don't believe me.

KIDS: Mhondoro is child friendly, with a dedicated open-air play area. Children under six may not be accommodated on scheduled game drives when other guests are joining but private drives can be arranged, subject to the availability of a vehicle and a ranger.

RATES: From R5,350 ppspn. These include accommodation, all meals, drinks (including local beers and house wine), two safari activities per day and transfers from the Welgevonden Reserve's main gate or airstrip.

SUNDAY TIMES SPECIAL OFFER: Readers quoting this article will qualify for an additional free night when they book and pay for two nights in June. The offer includes a private dinner and a romantic turndown in the room. Valid for stays during June 2020 only. Ts & Cs apply.

• Kumalo was a guest of Mhondoro Safari Lodge & Villa Spa

In search of silence: 7 of SA's best destinations to get away from it all