Adventure biker 'Itchy Boots' tours SA, bringing her legions of fans along for the ride

Dutchwoman Noraly Schoenmaker has spent years travelling the world solo on a motorbike, amassing a huge social-media following along the way 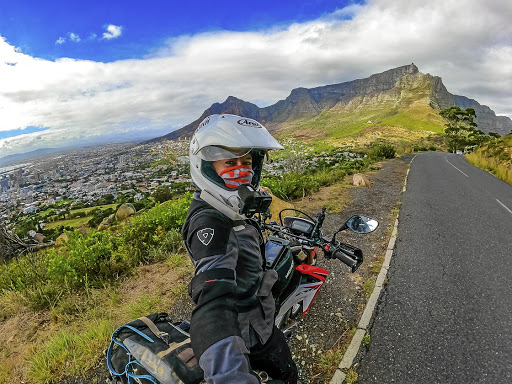 I've ridden a motorbike with Noraly Schoenmaker from India to the Netherlands and from Patagonia to Peru. But the other day I met her for the first time in one of the less salubrious southern suburbs of Cape Town.

Schoenmaker is the seemingly unstoppable bundle of energy behind the Itchy Boots channel on YouTube, but the Covid-19 pandemic threw up an insuperable obstacle when it interrupted her motorcycle journey from the southern tip of South America to Alaska.

Forced to abandon her Royal Enfield Himalayan touring motorcycle in Peru, she boarded an evacuation flight to the Netherlands and cooled her heels in northern Europe for a year before deciding to scratch the travel itch once more by touring SA.

Since late February she's been posting videos from Gauteng, Limpopo, the Eastern Cape and KwaZulu-Natal, and, after a break in Plettenberg Bay, she made it to Cape Town in late April.

From a walking sea safari to snorkeling with seals, there are many ways you can have an unforgettable encounter with our country's marine life
Lifestyle
1 month ago

I had one of those double-take moments when a rider and a bike that looked an awful lot like Schoenmaker and the Honda she has dubbed "Savannah" pulled up outside the Southfield shop where accessories were being fitted to my own motorcycle.

Then I spent an hour chatting over coffee with a woman I'd never met but who has been a global travelling companion for me and 745,000 other subscribers since she set off from Delhi in December 2018.

During her travels, Schoenmaker has chalked up more than 100-million YouTube views and gained hundreds of thousands of fans.

If they're like me, they're as impressed by the 33-year-old's optimism and fearlessness as they are by her motorcycling exploits. Nothing seems to disturb her equilibrium, not even breaking down in a remote part of Iran or being viciously stigmatised in the Peruvian town where she was suspected of having introduced Covid-19.

An International Women's Day post on Instagram from the Blyde River Canyon summed up Schoenmaker's approach. In it, she says: "I don't fear the unknown. I choose not to live my life in fear. It is by letting go of fear that you can truly be free.

"I've lived, worked and travelled solo in more than 80 countries by now over the past 15 years. I am an experienced traveller and am anything but naive. Still, I'm often being referred to as a 'little blonde girl' who needs to be very careful and constantly warned for all the dangers out there, instead of as the fierce, experienced woman I know I am.

A small but growing number of Zimbabweans are going home to help rebuild their country. Among them is Mati Nyazema — the woman who wouldn't take no ...
Lifestyle
3 weeks ago

"If I'd listened to every person that patronised me and told me I couldn't or shouldn't do something because I'm a woman, I wouldn't have seen or experienced anything other than the place where I grew up. We all die. But not everyone really lives."

When I greeted her, though, I sensed an initial reserve, and it emerged from our conversation that her popularity has produced a crop of stalkers she works hard to avoid.

Indeed, the video showing her pulling up in Southfield appeared on YouTube more than a month after the event, by which time she was probably already in Namibia, well out of range of anyone who might want to track her down at her Constantia Airbnb.

WATCH | One of Noraly's SA episodes, in which she hits the Karoo solo.

Even though she's moved on, the wonder of YouTube means you can travel vicariously with her through what she told me was a "paradise for adventure riders".

At that point she hadn't even seen the wonders of the Cederberg, but she had ridden to the Lesotho border post at the top of Sani Pass and spent a night in Die Hel.

While international travel remains largely out of reach, Itchy Boots will rekindle your enthusiasm for the delights on our own doorstep.

When life gave them lockdown - and the ability to work from anywhere - Melissa Sutherland and her husband seized the chance to realise their dream of ...
Lifestyle
1 month ago

Foreign travel remains tricky thanks to Covid. Luckily our country boasts a wealth of locales that can stand in for some of the world's greatest ...
Lifestyle
4 months ago

A quirky ladies' road trip: 3,100km of fun on the Cape's back roads

Ilse Zietsman and her adventurous companions took the long route from Paarl to Mossel Bay, with much wine, laughter and braaiing along the way
Lifestyle
6 months ago