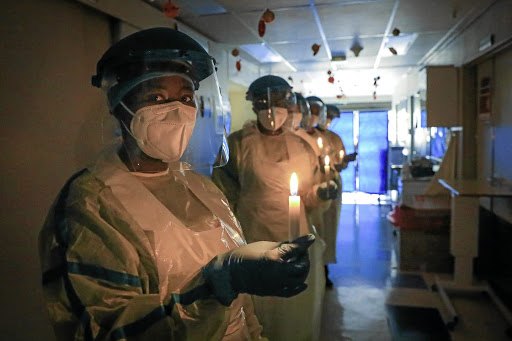 Seipati Nyembe and her colleagues at the Netcare Sunninghill Hospital in Sandton, Johannesburg, respond to President Cyril Ramaphosa's call to light candles in honour of all those South Africans who have lost their lives to the coronavirus.
Image: Sebabatso Mosamo

As SA experiences harrowing death and infection rates, health experts have slated the government's readiness for the second wave of Covid-19.

The SA Medical Association (Sama) said the country is less prepared than it was for the first wave. It said little effort has been made to boost staff complements at hospitals after large numbers of health-care workers succumbed to the coronavirus.

The Sunday Times has also learnt that despite being informed in September that an audit of 160 hospitals found that most required urgent upgrades to patient oxygen-supply systems, the government has done little to fix the problems.

With infections skyrocketing, experts say a quick vaccine rollout is SA's final defence. But this has been botched too, they say.

The Carletonville police station on Gauteng's West Rand has become the latest of a list of stations that had to temporarily close due to Covid-19.
News
1 year ago

And an article in the Sunday Times by the Progressive Health Forum — consisting of some of SA's most eminent medical experts — says a “frantic cover-up” now appears to be under way.

Referring to the government's refusal to provide life-saving HIV/Aids medicines, the forum says: “A high probability of a reprise of this is a monumental and unforgivable failing.” It called for heads to roll in the health department.

SA recorded two spikes this week — a daily death count of 497 on Tuesday and 18,000 positive infections on Thursday.

South Africa has recorded more than 18,000 positive coronavirus tests in the last 24-hour cycle, setting a record high on the final day of the year.
News
1 year ago

“She gave her life to her work and in the end, her work claimed her life. We are still in disbelief and hurt by her passing ... she was committed to saving lives.”

Somiah said Govender, 48, who worked at Chatsworth's RK Khan hospital for about 20 years, complained of not being able to breathe on December 21. The mother of three was admitted to a private hospital.

“I got a call from doctors on Christmas Eve, asking for permission to intubate her, and then about 15 minutes later they called back to say they couldn't save her. Getting that call was just devastating,” he said.

A specialist nurse at a Durban state hospital said the impact of the pandemic on health-care workers is dire.

Basic education minister Angie Motshekga has released directions to ensure Covid-19 protocols are in place to help the more than 45,000 people ...
News
1 year ago

“On Tuesday, 27 nurses tested positive, which meant they had to go into quarantine for five days. If you are showing symptoms then you have to stay away for 10 days.

“But because of the shortage of staff, we have cases where positive staff are still working. It's exhausting mentally and physically. I feel as if I am suffocating but we just have to go on ... and we are nowhere near the peak yet.”

With a rising number of hospitalised patients requiring oxygen, a KwaZulu-Natal trucking company said demand for the transport of oxygen to hospitals had increased sixfold since December 26.

“It’s not a shortage of equipment but rather a 600% spike in demand for oxygen as a result of Covid,” says Arend du Preez, CEO of Crossroads, a logistics supplier to a multinational company which supplies industrial gases and services to various industries including the medical industry.

Booze restrictions will help until we get a Covid vaccine: specialist at busy hospital

A front-line worker at one of the biggest hospitals in Gauteng said the number of Covid patients being admitted to the hospital was steadily ...
News
1 year ago

Of the audited hospitals, 40 required major upgrades, including the installation of bulk oxygen tanks and specialised reticulation systems to pipe oxygen to patients' beds, and 110 required minor upgrades.

Ministerial advisory committee (MAC) member Prof Ian Sanne, speaking in his capacity as CEO of Right to Care, said the recommendations were presented to national and provincial health departments, public works and Treasury officials in September, but “little if any action has been taken”.

He said while there were no concerns about the production or supply of oxygen, “there are serious concerns around ... the transportation to distribute oxygen, and district, regional and rural hospitals which have limited storage systems”.

“I am significantly concerned about the delays. The health department has been warned of the consequences of inaction.”

Disagreement over whether KwaZulu-Natal has the resources to cope with Covid-19 patients continued on Thursday as Sama bemoaned a “dire shortage” of ...
News
1 year ago

“In the Eastern Cape, seven hospitals have undergone upgrades. Twelve still require
upgrades. The Western Cape, which did its own audits through its own initiatives, is upgrading its hospitals.”

Meanwhile, Sama has appealed to the government to immediately lift the moratorium on frozen medical posts.

“Sama warned the health department in October that staffing plans needed to be in place when the second wave struck, but there was no desperate effort to employ more staff, especially in the public sector, not even on contract,” said Sama chair Dr Angelique Coetzee.

“With staff ill or on leave ... the second wave is overwhelming hospitals. Even if there were available beds, you need people to man them.”

Life Healthcare Group has dismissed as fake WhatsApp messages saying three of its hospitals in Gauteng are closed for admissions and that no ...
News
1 year ago

University of KwaZulu-Natal's dean of nursing and public health, Prof Mosa Moshabela, said SA is in serious trouble, with a lack of health-care workers and oxygen-supply systems worsening the crisis. “By the time the second wave's peak hits, there will be massive collateral damage. Patients' survivability will be limited.”

Addressing the nation this week, President Cyril Ramaphosa said a vaccine would be ready for rollout by the second quarter of 2021. Four global vaccine trials are also under way in SA.

Madhi said the government's decision to throw its weight behind the Covax facility without also engaging in bilateral discussions with pharmaceutical companies had left SA out in the cold.

He said the fact that four vaccine trials have been carried out in SA should have put the country in a favourable position to negotiate access to vaccines through bilateral engagements, but it had been left too late.

SA was right to choose Covax rather than one vaccine supplier, says health DDG

SA has not delayed the procurement of the Covid-19 vaccine, deciding to acquire it in a manner that would not put the country at financial risk
News
1 year ago

The Progressive Health Forum said it appeared the MAC had been muzzled. “Its members have the expertise to produce a transparent and accelerated vaccine acquisition strategy, measured in weeks, not months. That such a strategy is lacking puts them in [an] invidious position,” it said.

Madhi said the only currently available vaccine that would pass regulatory approval and be viable to distribute in SA was the AstraZeneca vaccine. AstraZeneca has licensed Brazil and India to manufacture its vaccine and make it available at cost price.

According to Daily Maverick, India's Serum Institute will begin producing the vaccine shortly with the hope of supplying SA within the coming weeks.

This week it emerged that 300 million doses of a vaccine are to be produced by SA pharmaceutical company Aspen. The company said the deal with Johnson & Johnson would depend on completion of phase 3 clinical trials.

The health department did not respond to questions on SA's readiness for the second-wave spike or the government's negotiations on a vaccine.

“As part of the Covid-19 response, the field hospitals have been equipped with an oxygen reticulation and tanks.

“Every hospital which treats Covid-19 patients can provide oxygen.

“The demand for oxygen during this second wave of the pandemic is up three times the volume than [during] the pre-Covid period. The entire oxygen system is currently under strict monitoring due to the number of patients requiring oxygen.”

She added that minor upgrades, were planned for Brackengate hospital while major upgrades to the oxygen system were also planned for Victoria, Karl Bremer, and Tygerberg hospitals.

Gauteng health department spokesperson Kwara Kekana said all state hospitals in the province had bulk oxygen supply tanks. Minor upgrades that needed to be done entailed the flow of oxygen.

In regard to major upgrades, Kekana said electromechanical upgrades were being effected, “in order to improve efficiency as some of the oxygen infrastructure is 10 to 20 years old”.

When it comes to consequences it's always easier if someone else is to blame - and it looks like Mzansi is blaming the level 3 lockdown on cider ...
News
1 year ago

While we wait for the vaccine, let’s grow up and be responsible

During his address to the nation this week, President Cyril Ramaphosa said that the first doses of a life-saving Covid-19 vaccine will arrive in the ...
Opinion & Analysis
1 year ago

As the marking of matric exam papers starts in earnest this week, some markers have expressed fears of contracting Covid-19 at marking centres.
News
1 year ago