Covid experts say much has been learnt in past year

As the third wave arrives in some provinces and looms in others, an expert says she feels confident the country is better equipped to handle it.
Image: 123RF/Jarun Ontakrai

In April, when she took over from Professor Salim Abdool Karim at the helm of the ministerial advisory committee on Covid-19, the peak of the second wave had come and gone.

Now, as the third wave arrives in some provinces and looms in others, she feels confident the country is better equipped to handle it.

Mlisana said managing this wave is bolstered by much clearer definitions of what phase each province is in. There are now technical parameters that "define the threshold of a wave".

"We are able to look at provinces and adapt our responses. Even within provinces, we can now see what is happening at district level and see what the focus should be," she said.

As a microbiologist and executive manager at the National Health Laboratory Service, she has seen first-hand how testing has changed.

A partial audit of the billions of rands the government spent fighting Covid-19 paint a picture of looting on an industrial scale.
News
5 months ago

During a recent AfroCentric Health webinar she said that in the earlier phases of the pandemic "we found ourselves overwhelmed by samples". In response, public and private lab staff began working together, diagnostics improved and new technologies - including automated systems - were established.

"These are resources we can use in the third wave and the future," she said. 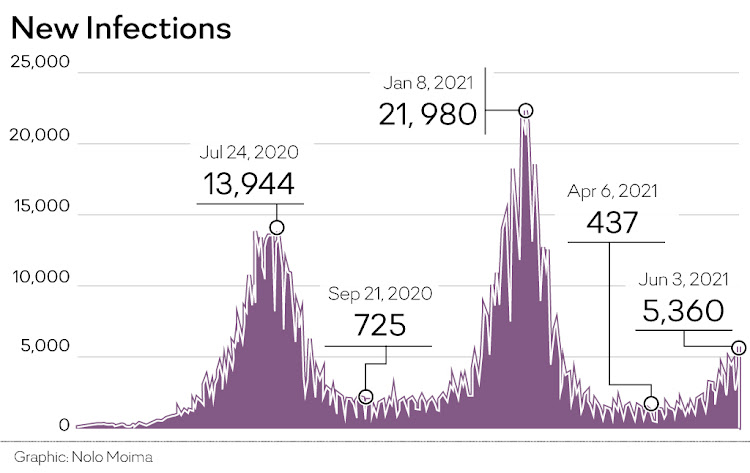 Collation of data will also make the third wave easier to handle. "When we started, a lot had to be improved in how we collate data and analyse it. We're now a lot more confident of whatever data we come across, and dashboards are available to everybody."

That data, Mlisana said, is not just lab tests, but "the whole clinical picture". It all goes to the National Institute for Communicable Diseases, which means the health department can monitor bed occupancy rates at different facilities.

Professor Bruce Mellado of the Wits University school of physics said at a Gauteng command council briefing on Friday that Gauteng was three weeks into the current surge and had 16 infection hotspots.

Mellado, who launched the Wits Covid dashboard last year, said the rate of positive testing was higher than 10% and the rate at which the virus was spreading as people moved around was similar to levels seen just before the second wave.

More than 15,000 cases had been recorded in the province over the past week and there had been a steady increase in hospital admissions, said acting health department head Lesiba Malotana.

He said Gauteng would have enough hospital beds for the third wave, in spite of the loss of capacity following the Charlotte Maxeke Hospital fire, and would not use field hospitals. 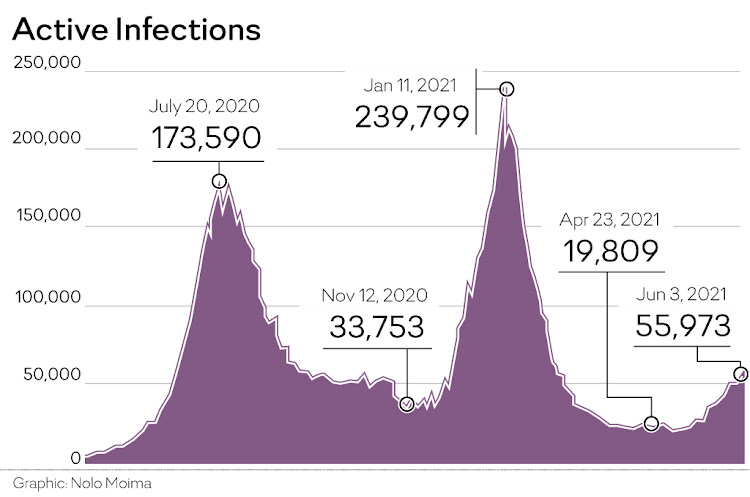 There were also no plans to change treatment regimes, said Kwara Kekana, spokesperson at the health MEC's office.

In the Northern Cape, officials said the high number of new infections was due to ramped-up testing capacity, which meant 905 tests per 100,000 people were being conducted daily, premier Zamani Saul said at a briefing in Kimberley on Wednesday.

• 155% Increase in active infections between May 3 and June 3

The Eastern Cape, hard hit in the second wave, has unveiled an R80m modular unit at Cecilia Makiwane Hospital in East London, sponsored by Siemens, and provincial health spokesperson Sizwe Kupelo said it has bolstered capacity by 100 beds.

"We are also no longer reliant on oxygen cylinders but have installed tents with capacity of over 2,000l for medical oxygen storage," he said.

She said the Afrox plant in the Western Cape "has undertaken to scale up its oxygen provisions", while a central system monitors bed usage across the province.

Other provinces did not respond to questions from the Sunday Times.

"We are concerned about the Delta variant [identified first in India] and its impact in SA. We do not know how effective the vaccines will be against the variant," Gray said.

Dr Gerrit de Villiers, chief clinical officer of Mediclinic Southern Africa, said facilities in the Free State, Northern Cape and Gauteng are being "strongly impacted" and resources are under pressure.

However, "measures are in place to further increase our capacity should this be required", and in previous waves the hospital group had already provided additional training so nursing staff from other units could assist in intensive and high-care facilities.

In a matter of weeks, the directors of seven companies contracted to decontaminate Gauteng schools during last year's Covid lockdown blew through ...
News
5 months ago

Dr Helen van der Plas, an infectious disease specialist at Life Vincent Pallotti Hospital in Cape Town, said there was a great sense of relief that this time around so many staff have been vaccinated.

"Uptake among our health-care staff and our support staff, in excess of 1,000 people, has been about 90%. This is tremendous. This has a big impact on the uncertainty [of personal risk] and there is less staff absenteeism," Van der Plas said.

Jacques du Plessis, MD of Netcare's hospital division, said 18 months of Covid meant facilities were "fully equipped for all eventualities" and there would be no need to restrict elective procedures and non-Covid emergencies.

Democratic Republic of the Congo is facing a third wave of coronavirus infections, with its epicentre in the capital, Kinshasa, one of Africa's ...
News
5 months ago

Having gone as low as 0.5 at the beginning of February, SA's latest Covid-19 reproduction number is now 1.33.
News
5 months ago

Third wave crashes down amid trauma cases, mistrust and hitches in rollout