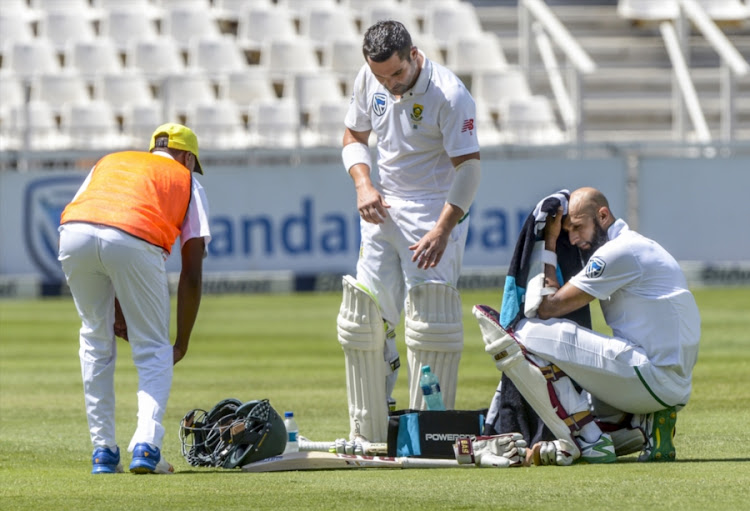 For a match that has had to come to grips with abandonment issues, this may yet prove to be a clash that stood the test of time.

There is no sadder sight for a pitch with more cracks than an Ingrams camphor cream ad, than have players and umpires head for the hills as your ghastly imperfections are hastily hidden under the covers. Besides, you can duvet the divots for only so long.

SuperSport's commentators, as if a CSI crack squad tiptoed yesterday morning, careful not to further contaminate the crime scene.

To be fair, it is a pitch that used to have a feisty reputation but it has been more benign in recent times. Over the years, or to be more exact since South Africa's test readmission in 1992, it yielded 302 runs on average to the team batting first. India of course, could only muster 187 in their first stint, while South Africa seemingly didn't fare much better in mastering the seam.

When the paying public arrived on Corlett Drive on Saturday morning they had no guarantee that they'd see any action following the deeply unsatisfactory conclusion to the third day's action.

Dean Elgar had copped one on the forehead, albeit with a technique and not the surface inviting closer scrutiny, thus increasing the likelihood that this match much like the Zuma presidency, may not go the distance.

Either way the pitch had hitherto made for a clash that demanded of batsmen technical proficiency, an exceptionally high pain threshold, and being unwaveringly partial to surprises.

Thankfully Elgar and Hashim Amla had few surprises in the morning session as this test avoided going down in infamy. Denying the Bullring the right to stage international matches was a prospect way too ghastly to contemplate.

India bounced back in fine style to restore some pride when they beat South Africa by 63 runs with a day to spare in a highly absorbing third and ...
Sport
4 years ago

SA lose AB and Amla but edge towards victory

South Africa need 105 runs to beat India in the third and final Test at Wanderers and register a monumental series whitewash over their bitter rivals.
Sport
4 years ago

Joburg has always been a tough place to drive a car‚ ride a bike‚ walk‚ run‚ be a kid‚ be a woman‚ be a bloke‚ get a job‚ stay out of trouble‚ stay ...
Sport
4 years ago

The Wanderers pitch behaved better‚ with less uneven bounce‚ in the first session of day four of the third test on Saturday morning where South ...
Sport
4 years ago

The third test between South Africa and India will continue at the Wanderers on Saturday despite doubts over the suitability of the pitch, the ...
Sport
4 years ago