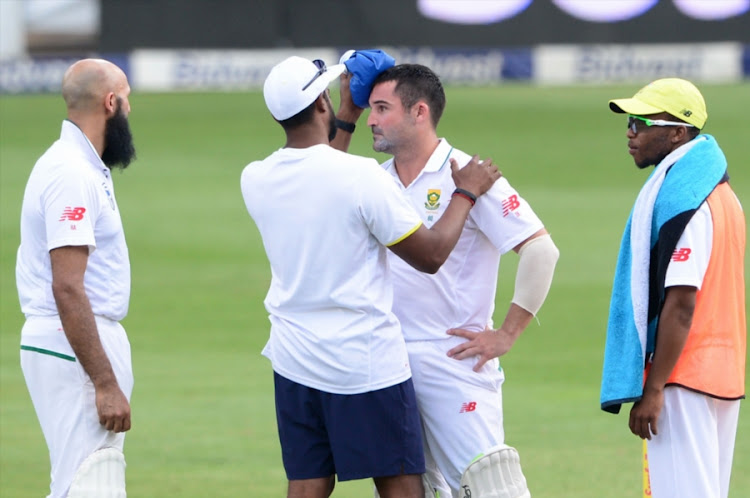 Dean Elgar of the Proteas gets attention after been hit on the head during day 3 of the 3rd Sunfoil Test match between South Africa and India at Bidvest Wanderers Stadium on January 26, 2018 in Johannesburg, South Africa.
Image: Lee Warren/Gallo Images

The third test between South Africa and India will continue at the Wanderers on Saturday despite doubts over the suitability of the pitch, the International Cricket Council (ICC) said on Friday.

“The on-field umpires [Ian Gould and Aleem Dar], in consultation with the match referee [Andy Pycroft], and after speaking with both the captains and groundsmen, have decided that the Johannesburg test will resume on time [at 10am] on Saturday,” the ICC said on Twitter.

“The on-field umpires will continue to monitor the pitch, and consult the match referee should the pitch deteriorate further.

“The welfare of the players is paramount and two of the most experienced match officials are in charge of the game and will take appropriate decisions.

“Play on Friday was suspended shortly before scheduled close because the on-field umpires wanted to consult the match referee regarding the condition of the pitch.”

The future of the match was cast into doubt more than three hours earlier when play was halted late on the third day after South Africa opening batsman Dean Elgar was struck on the grille of his helmet by a short delivery from Jasprit Bumrah.

Although Elgar was the first batsman to be hit on his helmet in the match, the teams’ physios had made eight other trips to the field to treat players who had been struck on their hands and ribs.

Batting conditions in the match have been extremely challenging, with the pitch offering fast bowlers emphatic movement off the seam as well as sharp bounce.

The ball has also swung through the air prodigiously. South Africa will resume on 17/1 in search of a victory target of 241.

Proteas and India want to continue with the Wanderers test match

A decision on whether the third and final Test between South Africa and India at Wanderers should continue is expected on Friday evening or Saturday ...
Sport
3 years ago

The third Test between South Africa and India at the Wanderers Stadium is in doubt after stumps were called in the third session for safety concerns ...
Sport
3 years ago

No blood spilt at Wanderers, but plenty of drama delivered

Blood was spilled at the Wanderers on Friday‚ but not in the way that you might think.
Sport
3 years ago

The treacherous pitch which is continuing to cast a shadow over the third and final Test of the Freedom Series between South Africa and India is ...
Sport
3 years ago