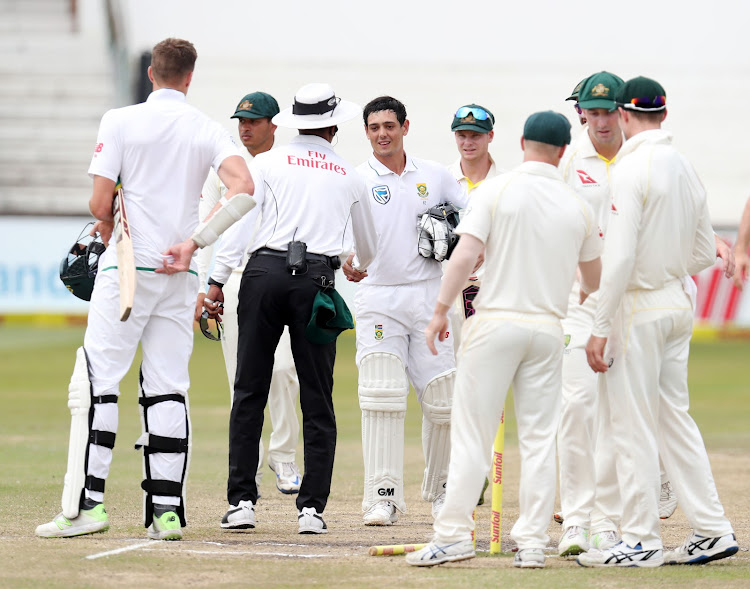 Quinton de Kock and Morne Morkel of the Proteas shake hands with the Australian players during the 2018 Sunfoil Test Series match between South Africa and Australia at Sahara Kings Park Stadium, Durban South Africa on the 05 March 2018.
Image: Muzi Ntombela/BackpagePix

Seventeen minutes and 22 balls were all Australia needed to wrap up their third consecutive Kingsmead Test win with a thorough 118-run hammering of South Africa.

Australia bowled South Africa out for 298 after the hosts resumed on 293/9 after bad light prevented Steven Smith's fire-up charges from claiming the spoils on the fourth evening.

Josh Hazlewood trapped overnight batsman Quinton de Kock (83) leg before to formalise the last rites that were swiftly administered by Mitchell Starc in a manic over on the fourth evening.

South Africa needed to pull off the second highest successful run chase in test history if they were to grab an unexpected series lead.

It was a bridge too far for the hosts with the performance of South Africa's stars leaving a lot to be desired.

Dean Elgar (nine)‚ Faf du Plessis (four)‚ Hashim Amla (eight) and AB de Villiers (0) didn't raise their hands even though De Villiers top scored with an unbeaten 71 in the first innings after South Africa were bowled out for 162 in reply to Australia's 351.

When South Africa were reduced to 49/4 after Australia's pace trio of Starc (4/74)‚ Hazlewood (3/61) and Pat Cummins (1/42) forcefully worked their way through the top order on the forth morning‚ the hosts were in a hopeless position and the hosts weren't expected to last the two remaining sessions.

Aiden Markram (143) was at the heart of a fight back‚ sharing 87 and 147-run partnerships with Theunis de Bruyn (36) and De Kock to give South Africa a modicum of hope.

However‚ man-of-the-match Starc was having none of South Africa's rearguard.

After Mitchell Marsh claimed the key wicket of Markram‚ Starc nearly beat the light with an over of reverse swing of the highest quality to have match figures of 9/108 from 28.4 overs

In that fateful 80th over‚ Starc had Vernon Philander (six) caught behind and in the last two balls of the over‚ castled Keshav Maharaj and Kagiso Rabada for ducks with successive in-swinging yorkers.

He wasn't able to claim a fully deserved hat-trick with the first ball of the morning but his smooth and slingy hi-octane reverse swing dismembered South Africa's lower-order without a fight.

Australia weren't able to take the new ball late on the fourth evening because of bad light and even they used Nathan Lyon and Steven Smith as slow bowling alternatives‚ they were hauled off the field when the artificial light fully took over natural light.

Time stands still for some‚ but not for Aiden Markram

It was 11.19am on Sunday everywhere except on Kingsmead’s scoreboard‚ which was making a furious attempt to turn back time.
Sport
3 years ago

The T20 Global League (T20GL) is not happening.
Sport
3 years ago

Can the Proteas take the first Test against Australia to the fifth day?

The big question that lingers at lunch on the fourth day is whether the Proteas will take the game to the fifth day‚ if not at least bat for the rest.
Sport
3 years ago

Did Cameron Bancroft think Australia might declare before play resumed on Sunday considering they were already 402 runs ahead at a ground where no ...
Sport
3 years ago