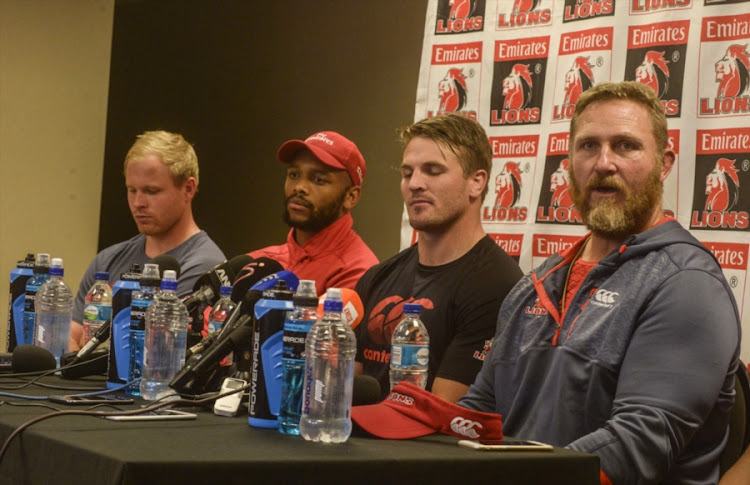 Ross Cronje of the Lions, Lionel Mapoe of the Lions, Captain Jaco Kriel of the Lions and Coach Johan Ackermann of the Lions during the Emirates Lions team announcement at Emirates Airline Park on August 03, 2017 in Johannesburg, South Africa.
Image: Sydney Seshibedi/Gallo Images

It is more about the journey. The destination‚ or in this case the Super Rugby crown‚ will not define the Lions‚ says captain Jaco Kriel.

The Lions clash with the Crusaders in Saturday's Super Rugby final at Ellis Park and Kriel believes one game can't possibly begin to tell their tale.

“I don't believe it defines the side at all‚ given the journey we've been through in the last couple of years‚" Kriel said.

"You can't define a side by one game. You have to look at the four years.

The Lions have named an unchanged team for Saturday’s Super Rugby final against the Crusaders at Ellis Park.
Sport
4 years ago

Creating that bond has been central in building a team greater than the sum of its parts.

That 'all for one'‚ culture has been all too evident.

“I don't think any other union has what we have here‚” insisted winger Courtnall Skosan.

“As a brotherhood and a family‚ it's really special to be here. Something to treasure. That environment creates the freedom for the players to express themselves.”

Before they can do that they need to do the hard yards against challengers who come with a massive reputation.

The final is very much a case of the new pretenders to the throne up against the competition's blue bloods hellbent on restoring the old order.

The cool-as-you-like conquerors and now defenders of the north (the Lions conceded the fewest tries in the league stages)‚ against the mighty marauders of the south.

His job has changed slightly‚ but Faf de Klerk has entirely warmed to the task of stepping off the bench and upping the ante.
Sport
4 years ago

The Crusaders‚ up front in particular‚ will pose questions of the Lions they are unlikely to have encountered this winter.

“The number of All Black players they have in their pack says something in itself‚” said scrumhalf Ross Cronjé.

Once on the front foot the visitors are known to wreak havoc with their back division.

“Clinically they are great. They can punish you from turnover ball. They've got a great counter attack and they have great ball players.

"They out-muscle a lot of teams. It's going to be important for our forwards to front up. They are vulnerable in one or two areas of the game‚” Cronjé said‚ crucially without expanding.

Now that the moment has almost arrived‚ coach Johan Ackermann‚ who is moving to Gloucester after Super Rugby‚ is having mixed sentiments.

He's ready for the final but he may not be as prepared to say goodbye to the players and men he helped shape over the last four years.

“The hour glass is almost empty‚” said the coach.

Having all but secured Paris hosting rights for the 2024 Olympics‚ France are now pulling out all the stops to stage the 2023 Rugby World Cup.
Sport
4 years ago

“You treasure every minute. Win or lose‚ my respect for the players will never change‚” said Ackermann in reference to the low from where the team started its journey.

He has lost a final as a player (with the Sharks in 2007) and as a coach (last year against the Hurricanes) and drawing from that experience he has implored his players to soak it all up.

“Just focus on your role in the team‚” he advised his players.

“Don't change too much. Don't close yourself off. Express yourself and embrace the moment.”