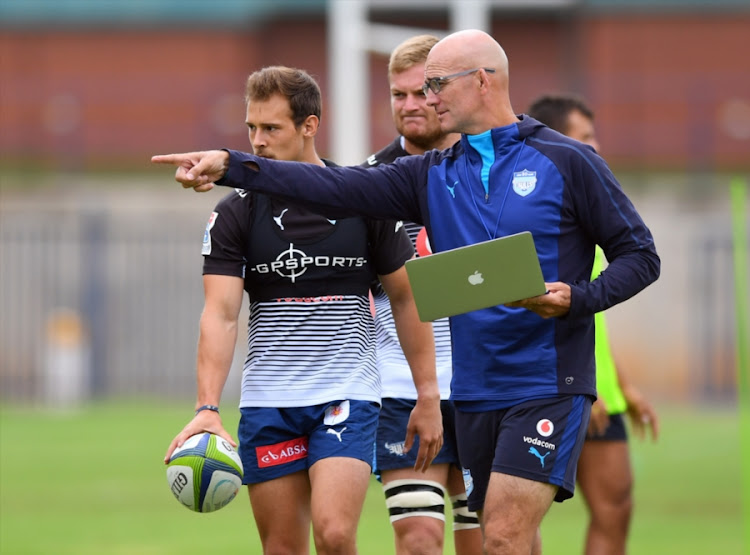 After they stunned Hurricanes to start their season on a winning note on Saturday‚ Bulls coach John Mitchell has urged his players to keep their feet on the ground and continue working hard.

The Bulls scored a try in the last ten minutes of their Super Rugby match at Loftus Stadium with a man down following Pierre Schoaman’s yellow card to narrowly win 21-19.

“There is no doubt that we are going to our bad days and fall short of our targets in future‚ which is the nature of the trade‚ but we have to put out feet on the ground‚ get back to work and continue learning and getting better‚” Mitchell said after the match.

“We got through some untidy periods but we were fortunate to get out of them‚ especially just after half time where we conceded a try and spent too much time on our own half.

"The game is always going to be full of mistakes and it is how you respond and get yourself out of those situations.”

Mitchell added that he was impressed by the positive mindset of his players on occasions they were put under pressure by the Hurricanes.

“The biggest leap from last year was definitely the mindset of the players and this victory is a foundation to understand what we have been doing during pre-season is the right way to go.

"We lasted longer than the Hurricanes and that was also important. Scoring the try with a man down was a big moment for us and the players did very well in that period.”

On Saturday‚ the Bulls host the Lions and Mitchell expects a tough match from last season’s losing finalists.

“I guess what is exciting for us is that we have our neighbours (the Lions) next week who are an outstanding side.

"They are one of the two sides with the Crusaders who put away the Hurricanes last year.

"The Lions had to endure a lot last year against the Hurricanes to get to the final‚ we have respect for them because they are a good football team and most football teams create opportunities.”

The Bulls started their campaign without Springboks fullback Warrick Gelant and they are likely to host the Lions without him if he does not recover in time from his knee injury.

“He will possibly be available for us next week but we are not going to risk him if he is not right.

"He is a type of guy who will let you know if he is going to be 100% percent and a decision will be taken later in the week after we have spoken to him and the medical team‚” he said.

Hurricanes coach Chris Boyd praised the Bulls while delivering a damning assessment of his team’s performance following their 21-19 defeat at Loftus ...
Sport
4 years ago

Bulls new era under coach John Mitchell in Super Rugby is up and running after they recorded a hard fought and vital 21-19 victory over fancied ...
Sport
4 years ago

The Lions may be lacking in sugar, spice and everything nice but in Aphiwe Dyantyi, they have all they need.
Sport
4 years ago