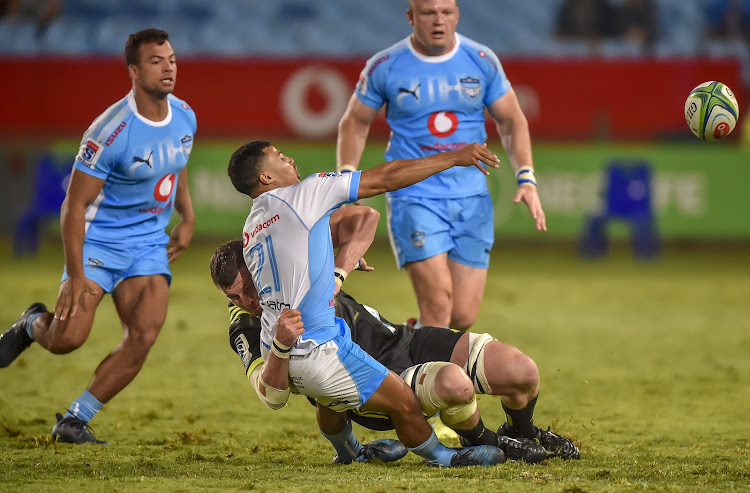 Embrose Papier of the Bulls and Murray Douglas of the Hurricanes during the 2018 Super Rugby game at Loftus Versveld, Pretoria on 24 February 2018.
Image: Christiaan Kotze/BackpagePix

The blue side of the Jukskei Derby will be hoping to wear the mantle of noisy neighbours as they try and stem the red tide at Loftus on Saturday.

First‚ though‚ the resurgent Bulls will be desperate to avoid a most undesirable record against the marauding Lions.

The Lions racked up 50 points against their foe in their last two clashes and a similar defeat would serve to prick the Pretoria side’s ballooning confidence.

A lopsided score line is unlikely however.

The Bulls’ victory last weekend over the Hurricanes at Loftus should have their chests bulging‚ especially when you consider it was only their second against New Zealand opposition since 2014.

The Lions‚ however‚ will come charging up the N1 with momentum and a record to envy.

They have been unbeaten in their last nine away matches in the South African conference and the closest they came to defeat on the road was a 19-all draw against the Stormers in 2015.

After falling under the spell of the Bulls‚ the Lions have lost just one of their last five clashes against their neighbours.

The sole Bulls’ win in that period came at Loftus in 2015 but they have since suffered two comprehensive defeats.

The Lions have steadily built their Super Rugby credentials over the last few seasons.

It is from that consistency that the Lions draw their strength.

The same personnel has brought a familiarity that has made for greater cohesion and continuity in their play.

By contrast the Bulls almost start from scratch.

Their new journey started in last year’s Currie Cup when John Mitchell took over the reins from Nollis Marais.

Their weather beaten playbook was all but put through the shredder by Mitchell who has encouraged his players to lengthen their stride and look for support runners when in possession.

They couldn’t quite break into full stride against the Hurricanes as slightly soggy conditions inhibited such a free spirited approach.

They did‚ however‚ show that they are comfortable playing into space and offloading before contact.

It is an area in which they are likely to challenge the Lions but the question is if the Bulls already possess the composure to win tight matches with their devil-may-care approach.

Against the Hurricanes they proved they can but the Lions will argue they are a different beast altogether.

After travelling for 34 hours‚ a depleted Blitzboks arrived bleary-eyed in Las Vegas with slightly lowered expectations for the fifth leg of the HSBC ...
Sport
3 years ago

Record try-scorer Seabelo Senatla and bruising forward Kwagga Smith have been named in the Springbok Sevens team for the Commonwealth Games‚ even ...
Sport
3 years ago