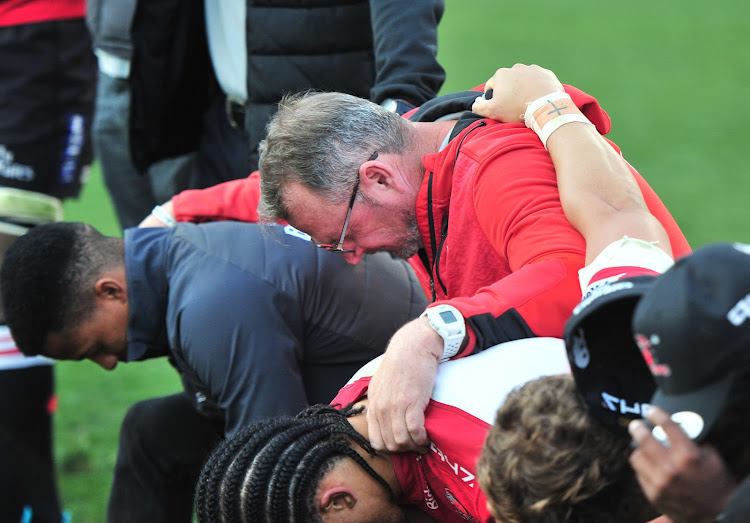 The Emirates Lions head coach Swys de Bruin and his players assemble for a short prayer ahead of their Super Rugby semifinal match against the Waratahs at Ellis Park Stadium, Johannesburg on July 28 2018.
Image: Samuel Shivambu/BackpagePix

Lions coach Swys de Bruin will be praying for divine intervention when his charges embark on a journey many regard as Mission Impossible.

They will travel to Christchurch and square up against the most garlanded team in the competition’s history in the Crusaders‚ who are red-hot favourites to win an unprecedented ninth title.

The Crusaders breezed through the league stages with some ease and are on a 14-match unbeaten run after easily beating the Hurricanes in the semi-finals.

The Crusaders are yet to lose a knock-out match on home soil and are laden with established and emerging All Black legends.

The Cantabrians have won eight of the 12 finals in which they’ve featured.

Flyhalf Richie Mo’unga was instrumental as a dominant and clinical Canterbury Crusaders side beat the Wellington Hurricanes 30-12 in a Super Rugby ...
Sport
3 years ago

As for the Lions‚ who lost in the last two finals‚ the first in wet and windy Wellington and last year on home soil against the Crusaders‚ the odds are as long as their journey.

They intend boarding a flight to Sydney on Monday before connecting onward to Christchurch‚ a venue at which the Crusaders are yet to lose a knock-out game in Super Rugby.

The Lions are‚ however‚ the last South African team to beat the Crusaders.

They did that at Ellis Park in a quarter-final in 2016.

The last South African team to win in Christchurch were the Sharks in 2014.

The Lions have inflicted a home defeat on the Crusaders but that was way back in 2001 in a match played in Nelson.

“I believe in miracles‚” the coach said cheerily after his team beat the Waratahs 44-26 in the semi-finals at Ellis Park.

“This team has proven anything can happen. The fact is they (the Crusaders) are the favourites.

"They are a very good team.

"It is still 80 minutes between four white lines. So it will be interesting. There are not too many weak spots there. We’ll have to find them.”

Christchurch and the Crusaders loom for South Africa’s Lions on Saturday‚ and seldom in the world of sport have the odds been so stacked against a ...
Sport
3 years ago

The Lions lost last year’s final on home soil with the occasion perhaps overshadowed by the imminent departure of former coach Johan Ackermann.

“I think it is vital not to make the occasion too big this time around‚” said De Bruin.

“(There were) too many emotions and (it was) about individuals. It has to be about the team. We have to stick to what works for us.”

Ackermann’s departure‚ along with some senior players‚ meant De Bruin had to convince many doubters he could make the step up to head coach.

"Everyone said ‘Ackers is gone‚ you’ve got no chance’.

"We lost our spine. We went through trials and tribulations like you can’t believe. It is just a miracle and a blessing the brotherhood stuck together.

"Losing players brought tough times. That makes the character so much better. Next Saturday‚ whatever happens will be a bonus.

“As long as we score good tries‚ stay brothers and work‚ the win will look after itself.”