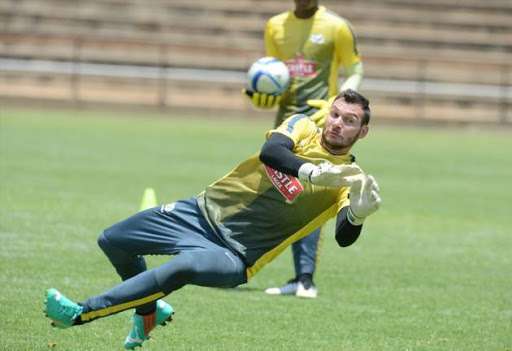 The keeper‚ who returned from injury for his club too late to be announced in Bafana coach Stuart Baxter’s squad for this month’s must-win games against Senegal‚ did not hesitate when asked if he believed South Africa could beat the Lions of Teranga twice.

“Of course I think we can qualify. I mean‚ everyone said‚ ‘Do you really think you can do anything against Nigeria?’

“And we ended up not just drawing but beating them away‚” Keet said‚ referring to the 2-0 win by SA in Uyo over the Super Eagles in Baxter’s first match in charge in June.

“Senegal are no different. Senegal aren’t as good as they used to be.

"They’re a good side obviously‚ with good individuals. But as a team they’re not as good as they used to be – there’s no doubt about that.

“So there’s no reason why we shouldn’t beat them at home and away.

“I mean‚ at home we should beat them regardless. Away‚ it’ll be a bit hostile out there.

“But I think we’re a good enough team. I think the footballers here are so good we should be able to compete with any team around.

“And it just comes down to being mentally tough and ready‚ and making sure we are also prepared for those games.”

Bafana suffered two crippling defeats against Cape Verde in September‚ then bounced back with a 3-1 win against Burkina Faso last month that has left them needing to beat Senegal in Polokwane on November 10 and in Dakar on November 14 to reach Russia 2018.

Keet said his Kaizer Chiefs counterpart‚ Bafana No.1 Itumeleng Khune‚ made a big difference returning from injury against Burkina Faso‚ and will play a crucial role against Senegal.

"He’s been around the Bafana team for long‚ so he brings a lot of confidence to the team‚ and a lot of experience‚” the keeper said.

Tottenham Hotspur now belong with the best in Europe after their 3-1 demolition of Champions League holders Real Madrid at Wembley, manager Mauricio ...
Sport
4 years ago

Oupa Manyisa shrugged off jeers from Orlando Pirates fans on what he described as an emotional night as he returned to face his old club in his new ...
Sport
4 years ago

I didn't do it: Danny Jordaan

Soccer boss Danny Jordaan has denied allegations by former ANC MP Jennifer Ferguson that he raped her 24 years ago.
News
4 years ago

Top referee Daniel Bennett will go before the South African Football Association’s (Safa) referee review committee in the next fortnight after a ...
Sport
4 years ago