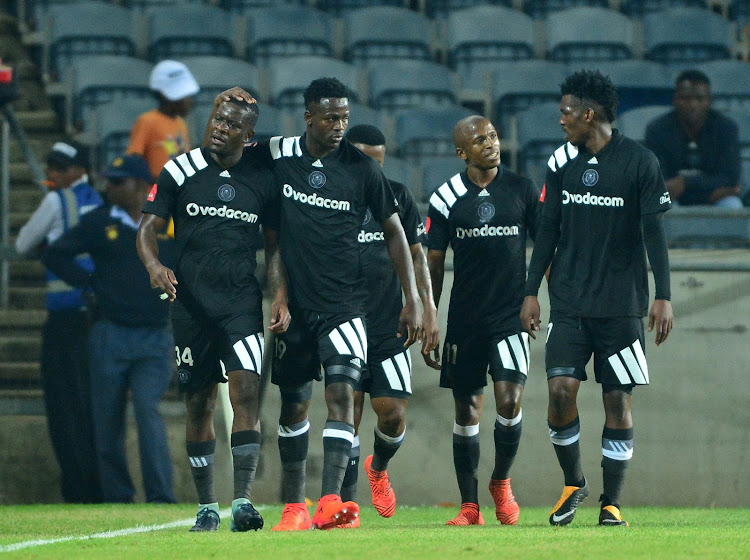 Ntsikelelo Nyauza of Orlando Pirates celebrates a goal with teammates during the Absa Premiership 2017/18 football match between Orlando Pirates and AmaZulu at Orlando Stadium, Johannesburg on 09 December 2017.
Image: Samuel Shivambu/BackpagePix

Orlando Pirates might have taken the Absa Premiership lead but continue to lack that edge that could truly make them contenders, settling for an eighth draw of the season, 1-1 against AmaZulu at Orlando Stadium on Saturday night.

Bucs were overly cautious in the first half, then ran rampant but could not score in the second in their fifth home game without a victory, with just one win from nine overall.

But surely such a dominant approach over 90 minutes would have increased their chances of victory.

It was Ntsikelelo Nyauza by the break, Pirates’ right-back scoring a 23rd-minute own goal and 35th-minute equaliser.

Pirates coach Milutin Sredojevic, who was again left ruing his “Rooibos without sugar”, has achieved his aim making Bucs more competitive from last season’s hiatus. But the gameplan from the outset of home games is lacking.

Even at Orlando, counterattacking Bucs do not come out pushing, pressing and instilling fear.

Against a team coached by Cavin Johnson, that approach can court trouble. Johnson plays to attack, and win, no matter the opposition.

He would also have seen how SuperSport United’s high pressing in a 0-0 draw against Bucs on Tuesday night somehow could not kill the game.

Usuthu came out trying to harass Pirates deep in their half, and the result was an opener.

Roaming forward Mhlengi Cele’s cross was missed by AmaZulu’s Siyathemba Mnguni at the near post. Nyauza was surprised to receive an awkward-bouncing ball and chested into his own exposed net.

Pirates equalised, but their own fortunate goal came from an AmaZulu mistake rather than pressure, Mbongeni Gumede giving the ball away for Musa Nyatama to pass Luvuyo Memela through. Memela’s attempted finish ricocheted off goalkeeper Boalefa Pule onto the post, Nyauza atoning by finishing the rebound.

Usuthu do not have the star quality to press Pirates for 90 minutes away, and Sredojevic, as he had in a the previous game, would have had an answer to that tactic out of the change rooms.

Johnson had AmaZulu more circumspect from the break.

And now Pirates did have a far better shape in attack, as Thamsanqa Gabuza replaced Nkosi and the big man’s bustling teed up Shonga to force a save from Pule.

Gabuza was through one-on-one to blast at Pule.

Then Bucs’ workhorse striker cantered onto a long-ball that Pule tried to leave to run for a corner, which did not run out, Gabuza hitting the netting.

Bucs now were rampant, Thabo Matlaba’s pass putting Memela through and Pule standing his ground, before Gabuza forced another save from the right.

But it still could have been an AmaZulu victory, Siduduzo Dlamini cannoning a free-kick onto the crossbar in added time.

Kaizer Chiefs had to turn to the old guard to hand them a much needed win and a little pre-Christmas cheer as Siphiwe Tshabalala came off the bench ...
Sport
3 years ago

Azubuike Egwuekwe's injury time equaliser earned SuperSport United a point when they drew 1-all against Cape Town City at the Mbombela Stadium.
Sport
3 years ago

Following two successive convincing victories this week over Cape Town City and Baroka FC where they scored seven goals and conceded only two‚ ...
Sport
3 years ago