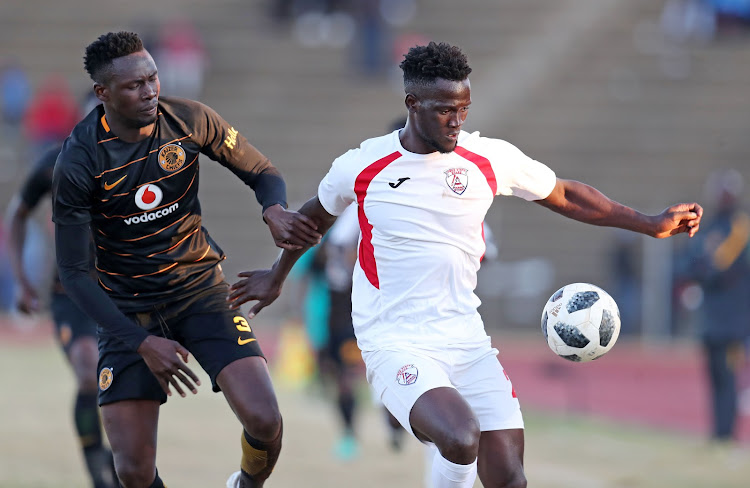 Siphelele Mthembu, then in the colours of Free State Stars, is being challenged by Eric Mathoho of Kaizer Chiefs during the Maize Cup final match at the James Motlatsi Stadium, Orkney on July 14 2018.
Image: Muzi Ntombela/BackpagePix

The forward did not go to training for the past two days and Stars general manager Rantsi Mokoena said the player was due to sign a new contract in Bethlehem this week.

This was confirmed by Ea Lla Koto coach Luc Eymael‚ who said he was mystified as to the players’ disappearance.

“Yesterday and today he did not come to training and he did not speak to me‚ he phoned the physio saying he had a family issue and he had to go home‚” Eymael told TimesLIVE.

Ajax Cape Town CEO Ari Efstathiou says the club have been left in limbo ahead of the new 2018/19 season‚ unsure what type of player they need for the ...
Sport
3 years ago

“The physio asked him‚ ‘why are you calling me‚ we have a team manager and a coach?’‚ and he said he did not have my number‚ which is a big lie because when I was in Belgium [for the close-season] I was phoning him.

“He has not responded to my message‚ so what can we do?”

Eymael says he already has a striker replacement in mind‚ but cannot name him as the player is negotiating his release from another club.

“We also have [Maboke] Matlakala and [Eleazar] Rodgers‚ so we have some new strikers.

"We will see what happens."

Ajax Cape Town have confirmed that they will launch an interdict to have the start of the new Premier Soccer League (PSL) season‚ scheduled for the ...
Sport
3 years ago

Mthembu scored just five goals in 30 appearances for Stars last season in all competitions‚ and has previously played for both Chiefs and Pirates in the Absa Premiership.

Eymael also confirmed that Stars are looking to re-sign Mamelodi Sundowns goalkeeper Thela Ngobeni after the experienced gloveman spent the last two seasons at the club on loan.

“He wants to come and he only has a year on his contract‚ so we will have to see if it will be a loan or a permanent signing.

"You know from the end of December he will be able to sign a pre-contract with us‚” Eymael said.