Polokwane coach Vukusic pleads for patience ahead of Limpopo derby 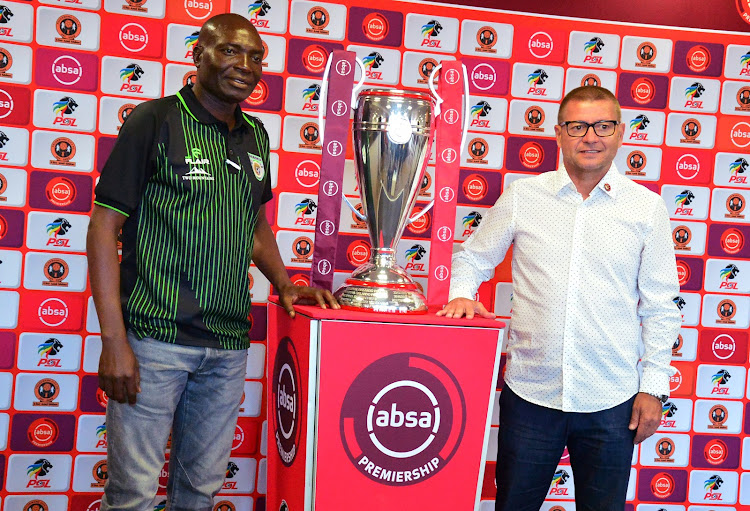 Baroka FC coach Wedson Nyirenda (L) pose for a photograph with the Absa Premiership trophy alongside his Polokwane City counterpart Jozef Vukusic during the Polokwane derby press conference at Peter Mokaba Stadium in Polokwane the on August 16 2018.
Image: Kabelo Leputu/BackpagePix

Polokwane City captain Jabu Maluleke says the team is adapting well to the methods of new coach Jozef Vukusic‚ despite a poor start to the season with defeats in their opening two matches.

City lost their first Limpopo derby against Black Leopards and followed that up with another defeat to defending champions Mamelodi Sundowns at home to leave them bottom of the Absa Premiership table.

Of particular concern to newly appointed coach Vukusic is that City are yet to find the back of the net this season as they warm up for a second Limpopo‚ and also Polokwane‚ derby against Baroka FC at Peter Mokaba Stadium on Saturday (kickoff 3pm).

City will be craving their first taste of victory and provincial bragging rights against Baroka.

Maluleke believes in coach Vukusic’s capabilities and said the team is slowly getting used to how the Slovak wants them to play.

“I think we are gelling in nicely with his form of method that he has brought into the team. We just have to apply it in the field of play‚” said the creative midfielder.

“It’s too early now to put pressure on ourselves and point fingers among ourselves.”

Vukusic‚ who was roped in June to replace Bernard Molekwa‚ has promised improvements and pleaded for patience.

“Yes‚ the start is not good it is the reality but it’s over now. We have to look forward‚” said the 53-year-old Vukusic.

“We work every day for our target and for the team to progress.

“We have a new team‚ we have a new coach‚ and new players. We will start [getting results]. I’m confident because the team worked hard during the preparations for the start of the season.

“I respect the reality that we need results and I say again we will get them.”

City will be up against a more confident Baroka‚ who have picked up four points from their opening three matches.

Bakgaga dusted themselves off after losing their opening match at home to AmaZulu with a win over Cape Town City and a credible draw against Kaizer Chiefs in their last two games.

Baroka coach Wedson Nyirenda said the performance against Chiefs‚ which saw them take the lead in the 1-1 draw‚ has given his team confidence.

“We were blessed in our last two fixtures. We played big teams. Against Kaizer Chiefs the players showed that they have the character to play against the big guys‚” the former Chiefs and Zambia striker said.

The 52-year-old Nyirenda‚ who won league titles with Zanaco and Zesco United in Zambia‚ cautioned against underestimating Polokwane.

“They have not started well but they are playing good football we can not take that away from them‚” said Nyirenda.

“All they need is to gain confidence from a game that they will win or draw. I think if they can get points in the games to come then they will have the confidence.”

Vukusic confirmed City will have a full squad while Baroka will be without Collins “Fabregas” Makgaka‚ who sustained a knock after coming on against Chiefs on Tuesday.

Nyirenda’s team are placed fifth on the table and are five points behind early-season leaders Bidvest Wits‚ who have nine points after winning their opening three matches.

Orlando Pirates fans may be concerned by their side’s stuttering start to the new 2018/19 Absa Premiership season following defeat to Bidvest Wits on ...
Sport
3 years ago