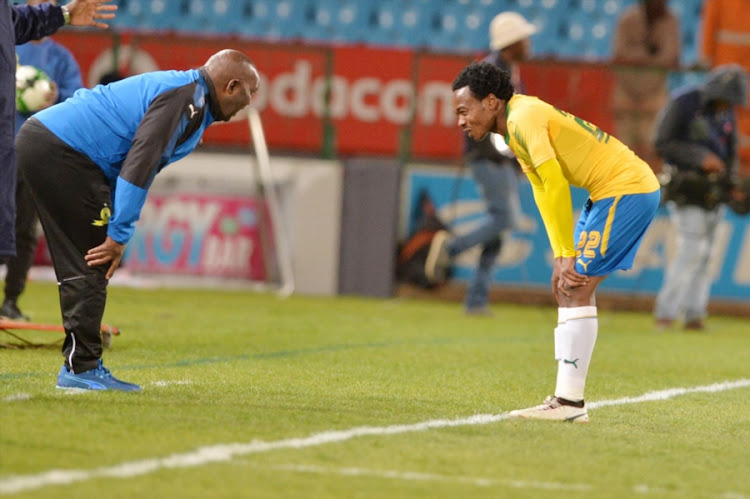 The former Sundowns attacking player‚ who is on loan at Belgian second division side Royale Union Saint-Gilloise from English Premiership side Brighton and Hove Albion‚ was named as Player of the Season in Belgium's second tier last week.

But Mosimane was not too impressed and said Tau should be playing in the English Premier League rather than in the Belgian lower tier.

“What is he doing there?” asked Mosimane in his trademark forthright manner.

“If Percy doesn’t get to the English Premier League‚ then I don’t know.

"Maybe you guys (media) must put pressure and they must give him the work permit.

"Can’t he go to La Liga‚ Bundesliga or Serie A‚ the boy is a top player.”

Percy Tau has been honoured with another accolade after sweeping to the Player of the Season prize in the Belgian second-tier following his ...
Sport
2 years ago

“For me I am happy that Percy went to Europe because he always wanted to go to Europe.

"It is also important that he went there to improve his life and that of his family because football is a game that changes our lives.”

Mosimane said Tau could have benefited immensely from playing against some of the best teams and players in the Caf Champions League in the last few months rather than spending the season in Belgium.

“On the tactical side‚ I don’t know if that league made him a better player than playing in Champions League here‚" he said.

Percy Tau and his teammate Selemani Faiz have been nominated for the Proximus League's player of the year award.
Sport
2 years ago

"It is debatable but when he won the award I said okay‚ he was expected to win it because he is a Premier League player.

"I am not saying it is a step back because there are positives but on the tactical side ....I think it’s tougher here.

"The Caf Champions League is a tough league because we get players from Europe playing for Wydad‚ Al Ahly and Esperance.

"That division aaai really‚ who is he playing against?

Premier Soccer League (PSL) prosecutor Nande Becker has squashed rumours that he has resigned or been fired.
Sport
2 years ago

"In the Champions League there is Ramadan Sobhi who rejoined Al Ahly from Stoke City in England and that is the level.

“Percy could have done much better in the Champions League and competed for the Africa Player of the Year‚ you know what I am trying to say.

"In Belgium‚ it is not my story but I happy that I supported him to get there and he left at the right level.

"He is still at a right level‚ the two goals that he scored for Bafana is what we want‚ let him go to the African Nations Cup and score against Ivory Coast.”