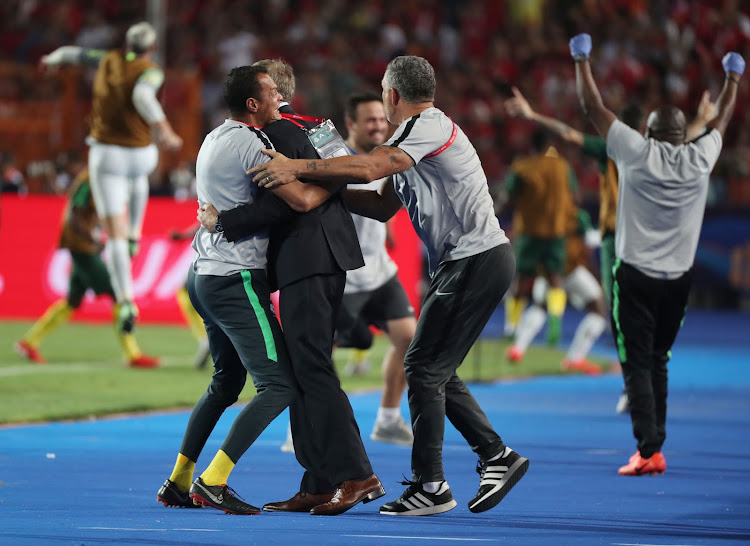 Baxter formulated the perfect gameplan that stifled the life out of Egypt in Bafana's 1-0 shock of the hosts in the last-16 on Saturday night.

He switched to a 4-3-3‚ pressing the the seven-time champions high.

He had had his front three harass the Pharaohs' defence and midfield distributors‚ with a second‚ solid midfield three line behind them‚ and cut the supply to wingers "Trézéguet" and Mohamed Salah.

Some fans back home have said they think they won the game pressurising Baxter into selecting goal-scorer Thembinkosi Lorch.

They think the Afcon finals is the equivalent of the Black Label Cup. But‚ ja‚ anyway.

Baxter's plan was excellent against Egypt.

Now he faces a Nigeria he beat 2-0 in Uyo in the first qualifier for this tournament‚ Baxter's first game in charge‚ and SA's first competitive win against the Super Eagles.

The return match in Johannesburg was drawn 1-1.

Against a different team‚ the coach is likely to have a different plan‚ or at least tweak the one against Egypt.

Twitter wants Stuart Baxter out, even after Bafana Bafana's Afcon win against Egypt

"That‚ I'll hand it over to Coach. Coach knows what he's doing‚" said big‚ affable striker Mothiba‚ whose holding-up of the ball was colossal against Egypt‚ plus he supplied the pass for Lorch's winner.

"He's gonna set up a proper gameplan for Nigeria. He's the boss‚ he knows what he's doing.

"So we just have to follow his instructions and go there and give everything."

Baxter has said Bafana's application of his plan by his players - largely thanks to the structure gained from a three-week preparation camp - was a masterclass.

"We worked on that at training. Coach worked with us - he pushed us at training‚" the Strasbourg centre-forward said.

How Bafana have developed a taste for shocking host nations

SA’s success over Egypt in Cairo at the weekend was not the first time that Bafana Bafana have upset the host nation at the Africa Cup of Nations – ...
Sport
2 years ago

"In the game against Nigeria‚ Coach might surprise us with other things. We never know.

"That's why I say‚ he's the boss and we'll just follow his instructions and when we put everyone in the field we just have to give everything.

"I think it is going to be a different game. Because Nigeria are [physically] strong‚ I think. They're stronger than Egypt. But I'm not sure about the movement‚ if they're faster than Egypt.

"Us‚ we must just focus on our training. Because it all starts there. Focus‚ and do what Coach tells us to do."

Mothiba had struggled without a service as Baxter was ultra-conservative in the group stages as Bafana‚ and the coach‚ found their feet at this tournament.

With five minutes remaining, having bossed Egypt in the first half, and frustrated them in the second, Thembinkosi Lorch got through alone on a ...
Sport
2 years ago

In an attacking game against Egypt‚ the striker was in his element‚ holding the ball for runners like Lorch and Percy Tau to feed off him.

"Because we pressed them high I had a lot of support‚" Mothiba said.

"I find it difficult when there's no support - when I get the ball and there's no-one‚ I get frustrated. Against Egypt I could keep the ball‚ then give them‚ and spin."

Nigeria have not beaten South Africa in their last five internationals.