Middendorp takes a swipe at Mosimane: I'll be in the stadium again‚ whether somebody likes it or not 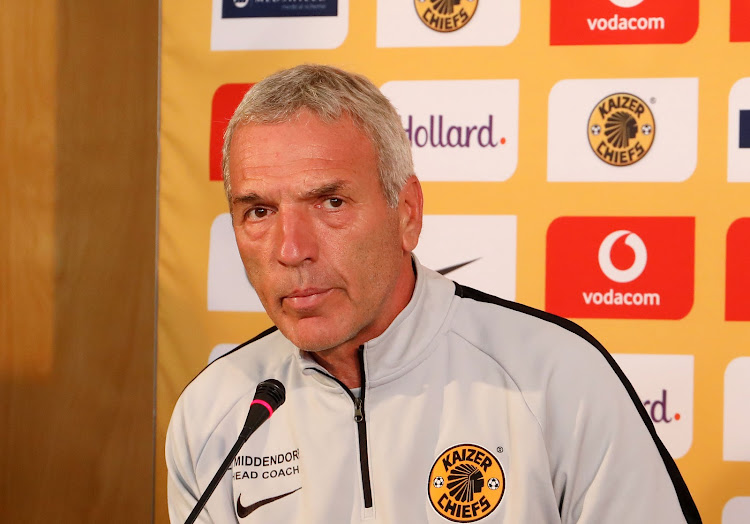 Middendorp was asked about a feature of his coaching approach – being in stadiums to watch coming opponents live – that is certainly not unique to the coach‚ but came to the fore when it was noted by Mamelodi Sundowns coach Pitso Mosimane last week.

Mosimane was asked last week‚ in the build-up to his team’s 2-0 Absa Premiership defeat against Chiefs at Loftus Versfeld on Sunday‚ about Middendorp having been at Downs’ matches for information-gathering purposes ahead of that fixture.

The Brazilians’ coach said he was not bothered by Middendorp’s visits.

Asked about this tendency‚ Middendorp made it clear he sees nothing unusual about the practice.

Middendorp‚ though‚ also could not resist a small swipe back at Mosimane after the Downs coach last week pushed at his Amakhosi rival’s buttons on a number of issues.

“It’s very crucial‚ by the way – I will see Sundowns in Port Elizabeth on Sunday at 3pm again. Because they play Chippa United [in another TKO quarterfinal]‚” Middendorp said.

“And Chippa are the next club to have a new coach [Norman Mapeza]. And therefore I will be in the stadium again‚ whether somebody likes it or not.”

Middendorp said the perspective you receive of a game is entirely different in a stadium to on TV.

“The camera is always following certain players‚ and a certain direction. You don’t really see parts of how the team are following‚ how they are getting stretched over the field‚” he said.

“On TV you don’t see the entire platform. How a team is giving holes‚ whether you can go more left or right-sided‚ or are there holes in the centre?

“We [Chiefs] record games from the back side‚ from the [perspective] of the goalkeeper‚ where we have another perspective on the shifting and the moving‚ not trusting only the TV production of SuperSport and SABC.

“It’s always what a coach can do. There are different opinions. Some coaches do not go to the stadium‚ but I like to see the game live.”

The stakes are high for both Chiefs and Pirates on Saturday. Amakhosi have not won a trophy since their Absa Premiership league title in 2014-15‚ and the Buccaneers since the 2014 Nedbank Cup.

Mamelodi Sundowns attacker Gaston Sirino and his club have been charged by the Premier Soccer League (PSL) with bringing the game into disrepute for ...
Sport
2 years ago