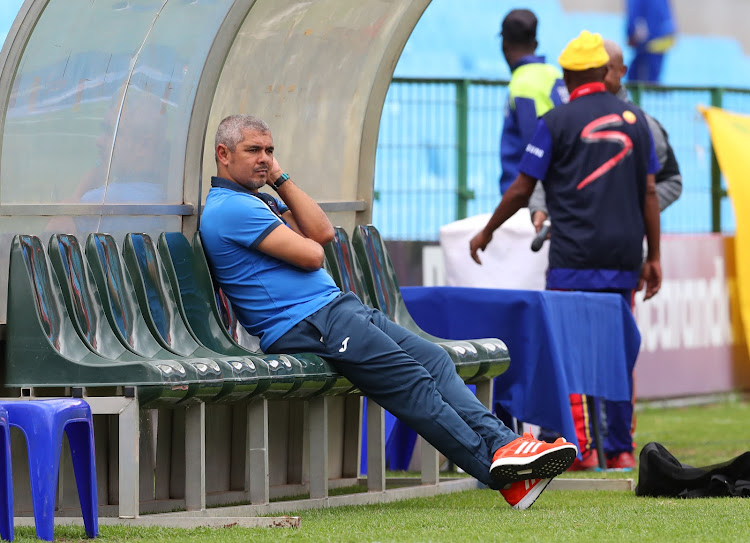 Clinton Larsen believes the quality and desire that his Polokwane City team has is good enough for them to avoid relegation.
Image: Samuel Shivambu/BackpagePix

Clinton Larsen says if Polokwane City keep playing like they have in the last few games‚ they will avoid relegation this season despite another Absa Premiership loss to Stellenbosch FC at the weekend.

City are second bottom of the league‚ one of three clubs on 17 points at the foot of the table.

They have taken just a single point from their last 12 available‚ but Larsen says that while the results have not been coming‚ he cannot fault the performance of the players.

"Progress is one thing‚ getting results is something completely different. There is a huge improvement in the way we have played‚ but results aren't showing that‚” Larsen said.

"But all we can do is keep applying ourselves the way we are. I keep telling them [the players] after every game‚ if you keep performing like this‚ your luck has to turn at some point.

"We are left with 10 games‚ 30 points‚ there is enough in there to stay up if we perform like this.

"It is the performances of the team that give me hope and optimism moving forward.

"I'm not happy with the results but what a good second half performance and we will build on that.”

City went down 1-0 to Stellenbosch FC in Cape Town after a timid first half and a much improved second‚ where they were the better side‚ but missed a host of chances and also came up against in-form home goalkeeper Lee Langeveldt.

"Second half it was all us‚ we threw everything at them.

"Lee made some good saves. The old saying that when you are down there [in the relegation mix]‚ things don't go for you‚ but I am very proud of the second half performance.

"I thought we controlled the game‚ we dominated them in both central and wide areas‚ and gave them huge problems.

"It wasn't to be. We go back to our last result [1-1 at home to Lamontville Golden Arrows]‚ exactly the same thing.

"Created a dozen chances but didn't take any of them. Go back to Baroka [1-0 loss]‚ same thing‚ so putting the ball in the back of the net has been our Achilles heel.

"The fighting spirit in the team is strong‚ the camaraderie within the group is strong‚ and that is important to turn the situation around. As long as we have that we have a chance.”

City have signed Malawi international defender Dennis Chembezi in January and are waiting on his paperwork‚ while Ayanda Nkili has also returned from long-term injury to bolster the side.

“I’m happy with my squad‚ there is enough talent there. We have just sorted out the central defensive position because we had major issues there.

“It is good to have Ayanda back from injury and we are just waiting on the paperwork for our Malawian international‚ so in the last 10 games we will be close to full strength.”

City are next in action away at fellow strugglers AmaZulu on Sunday in what the definition of a relegation six-pointer.

This was truly an ugly advert of the beautiful game, an error-ridden affair that would have been shamed by a spectacle of pot-bellied souls in a ...
Sport
2 years ago

Bradley Ralani is clear about what kind of football player he is - an attacking winger with mesmerising skills.
Sport
2 years ago

Motjeka Madisha scored a last-minute equaliser as Mamelodi Sundowns survived a refereeing howler to draw 2-2 at Angolan side Petro Atletico in their ...
Sport
2 years ago