'Tata laughed again. I watched him get up, knowing I couldn't tell him about the machine, because I didn't know how to' 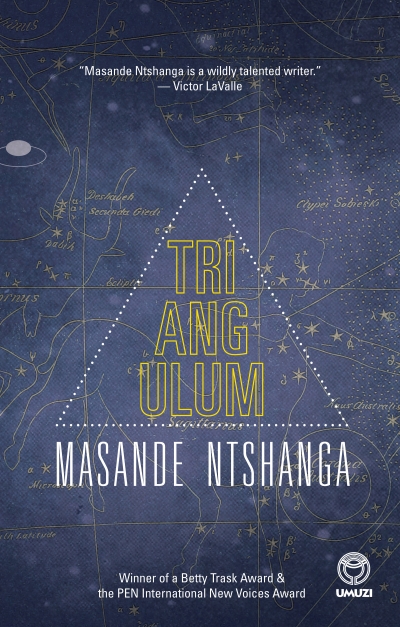 After his stellar debut – The Reactive, a novel published to great acclaim in South Africa, the US, Britain, Germany and Italy – Masande Ntshanga is launching his second book in May.

Triangulum is partly set in the Eastern Cape and concerns a schoolgirl maths prodigy who is haunted by the loss of her mother.

After the visitations by a supernatural, perhaps even extraterrestrial, apparition called “the machine”, the girl is convinced her mother is trying to make contact and that the machine is connected to a series of abductions of local girls.

But are her visions disturbed hallucinations to be medicated away? With her two closest friends, she sets out to find the truth, exposing troubling links to the area’s homeland-system past.

Years later, as a gifted data scientist in a dystopic surveillance state, the main character is drawn into a world of espionage, shadowy corporations, eco-terrorists and hackers through the love she feels for an elusive artist.

Presented as a message from the future, Masande Ntshanga’s Triangulum boldly mixes science fiction with philosophy and details of South African history seldom examined. An affecting exploration of bereavement, sexuality and coming of age, this multilayered novel showcases a completely original talent coming into his full powers.

The following morning, after he’d returned coughing from peering into our mailbox, Tata proposed a trip to a Pentecostal herbalist from out of town. A month before, he’d been laid off from his new job as manager of a fleet of vans that delivered amasi from a farm in Stutterheim, and he’d written a note for me to miss school so we could make it in time before the queues. My presence on the trip was for good luck, he said.

We set out at noon, Tata’s retrenchment letter on the console between us. His double cab crossed the rail bridge at the edge of our town and entered Ginsberg, where he parked next to a sleeping Alsatian with patches of pale skin showing through its fur. It was shivering from flea bites, and I moved away, careful not to step on its tail.

We walked through a grid of one-room houses with rusting roofs, to a house with a grassy yard and long queue outside the door. Tata sighed. For an hour and a half, we shuffled in line, before one woman collapsed, having reached the front of the line a moment too late. It took a while before a stooped man came over and carried her off. To pass the time, I looked around. The grass grew in sparse patches over the yard, disturbed in the middle by large, angular rocks that marked a path; the stoep smelt of enough ammonia to cause a headache, I thought, before I got one.

Tata got to the front of the queue and disappeared into a room without windows, built onto the side of a house that was larger than the rest. When he returned, without his retrenchment letter, he was holding two clear, unlabelled bottles. One was for health and the other would assure us wealth, he said, hefting them at his sides. He was to drink three times from each bottle, he added, and when we got to the bakkie, the dog had vanished along with its leash.

Tata and I were silent as we crossed back over the rail tracks.

“Tell me what you want to do with your life,” he said.

I thought about it. “I don’t know. Maybe take care of you.”

Tata sighed, shifting into first gear. “Just like your mother,” he said. “You can’t think for yourself, either?”

I thought for myself. “I want to be a scientist,” I said.

He didn’t respond. The rest of our trip was silent, and it was only when we got home that I realised I could never tell him what I knew.

That I wanted to look for Mama through the longest tele­scope I could find.

That afternoon, after we’d eaten our porridge and he’d drunk from each of his bottles, Tata went back to bed. I waited for his door to lock, then went to my room. I turned over my pillow and looked at the bloodstains, now turned yellow, on his old pillowcase.

This was in the spring of 1999. I’d been cured of acne. Nelson Mandela had announced his retirement, forfeiting a shoo-in for a second term, and the world was ending because of a computer bug.

Tata and I never spoke about Mama. Tata tried to keep her memory outside our walls, minimising her in conversa­tion, and I’d gone along with that until I couldn’t.

The first time I saw the machine, for example, I thought of the word “canard”, which I’d learnt from a crossword puzzle Mama completed with me when I was nine. I didn’t know to call it the machine, then; nor did I tell Tata about it.

Instead, the following morning, I heated up and served us two bowls of oats. Then I sat down and thought about the word, again.

“Rumour,” Mama had said, guiding my hand over the squares.

I looked up from my porridge bowl, now, and saw Tata in his worn diplomat’s bathrobe – the one with the old Ciskei insignia – poring over the classifieds section of The Daily Dispatch. His tea had gone cold.

Ever since the abolition of apartheid, he’d been unable to find regular work. Tata and his ex-colleagues had all dropped an economic class and retreated from the public, avoiding the glares that awaited them in schools and supermarkets. In Bhisho, he’d served as a financial officer in the Department of Agriculture, working through the Ciskeian Agricultural Bank to develop “released areas”, or clusters of previously white-owned farms which had been absorbed into the homeland.

I sat back in the kitchen chair and spoke without expecting an answer. “I thought you had a position lined up with those new Renewable Energy people,” I said. “Last week, you told me they even had a logo.”

Tata scoffed, folding his broadsheet in half. He pinched its spine and closed his eyes. “They’re all amateurs,” he said. “Lawrence is the worst of them, too. He’s never worked a day in his life.”

I looked at the headline obscuring his face. It was about how many of us were illiterate in the province. I stirred my oats and cleared my throat. “I don’t believe we have an 86 percent literacy rate in the Eastern Cape.” I said, “I’ve been to our schools.”

“Especially amongst the males.” I raised my spoon and pointed at the headline.

Tata looked at it too, and laughed. “No, you’re right. It isn’t just Lawrence. Everyone’s books are cooked.”

We laughed together until he broke into a cough. Changing the subject, I told him how the previous afternoon I’d asked a teacher if it was true that in the year 1500, there were only half a billion Homo sapiens on the planet. “I told him I knew it was over six billion now, but I wanted to know if it was possible to feed that rise in population without fossil fuels.”

“Then you were looking at my papers?”

I nodded. “They were lying on your desk.”

“Did you get an answer from your teacher?”

“I don’t know. He said he likes to keep an open mind.”

“That some people believe the Earth is two thousand years old.”

Tata laughed again. I watched him get up, knowing I couldn’t tell him about the machine, because I didn’t know how to. He put the newspaper on the table, fastened his robe, yawned, and left the kitchen.

I carried his cup to the basin and emptied it, watching the cold rooibos sluice into the drain. I ran the water for the dishes. It was warm outside. The air was placid, pierced through with the sounds of birdsong and children. In a short while, parents would expect their cars to be washed by their teenage sons. Their lawns trimmed. I ran the water over my palms. Then I began on the plates, the cold water paling the tips of my fingers until each looked like a small cylinder of powder. After drying my hands, I fell asleep for half an hour in front of a muted rerun of Noot vir Noot. When I woke, I took the house keys from the rack.

In the garage, although the air was humid, dust powdered all the surfaces except for the treadmill in the corner, where I’d balanced my bike. The treadmill didn’t work, but the belt moved when I rode over it, and that’s what I’d been doing for the past month, ever since Tata drove me to Farrer’s Sports to get me a mountain bike for scoring the top grade in my class. He couldn’t cycle himself, but he wanted me to know how to. I’d convinced him that I’d learn to do it on the go, but I hadn’t.

The lights in the garage had fused; I had to remove a large cardboard box from the window to let in light. I balanced my bike on the treadmill and began to pedal: it was flat and long enough to hold both tyres. Every time I tipped sideways, instead of spilling off, I’d clutch one of the handles on the treadmill. It was a sixteen-gear bike, and I wasn’t tall enough to plant my feet on the ground when I lost my balance. This way, I could practice until I got tired.

That night, the machine returned.

Like the night before, as soon as I closed my eyes, the parts came out of the opposite ends of the wall, coming together to form a hole in the middle of the ceiling. The room filled up with a mechanical hum, and, looking around, I found that I couldn’t see.

The following morning, I woke up on my stomach with my vision blurred.

I unlocked our garage, dragged the bike off the treadmill and rode around the block as the morning air cooled my sweat. I could tell it had taught me how to ride, and that this was the beginning of its visits to me. As I rode further up Wodehouse, I couldn’t keep myself from blinking, the world filled with a vividness that felt capable of blinding me.

The Tortoise Cried its Only Tear by Carol Campbell: This is the third from journalist Campbell set in the Karoo, but, unlike her others, this has ...
Books
2 years ago