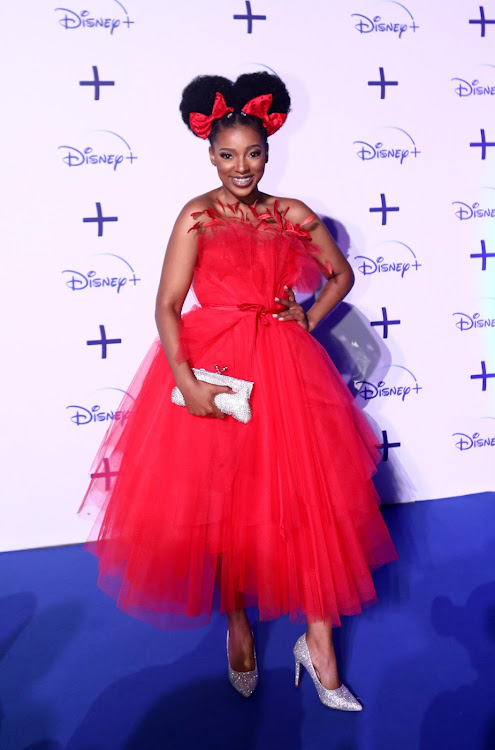 Lorraine Moropa at the Disney Plus launch at Kyalami.
Image: MASI LOSI

Imagine a party where three of the country’s most iconic buildings turn blue and fireworks light up the sky as more than 400 top entertainment VIPs watch the live feed in awe.

Everywhere you turn is a well-known face, with entertainment including acrobats, dancers and an electrifying performance by a young diva who drew global attention after singing alongside Beyoncé on her hypnotic track My Power.

It was no Mickey Mouse affair when the  Walt Disney Company rolled out the blue carpet to flip the “on” switch for its streaming service Disney+ in SA.

We were summoned to the Kyalami Grand Prix Circuit in Midrand on Wednesday evening for the official launch.

In the parking lot I bump into actress Zikhona Sodlaka, dressed in a flowing yellow and black Imprint maxi dress.

“Winter is such a waste of fashion,” she laments as we make our way into the building illuminated with the famed Disney logo.

After temperature and vaccination checks it is up a flight of stairs and on to the Jody Scheckter Paddock Area and viewing deck where waiters proffer blue cocktails.

I spot a host of celebs including singer Donald Moatshe, Azania Mosaka and her daughter Shamiso, influencer Tshepi Vundla and her rapper partner, JR, and Lorraine Moropa in a red feathered number, her hair finished off with Minnie Mouse-like red ribbons and a hairpiece sculptured to mimic the famous Disney cartoon character’s ears. 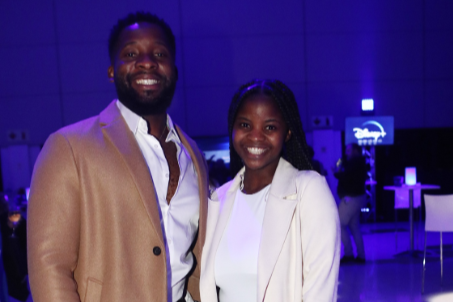 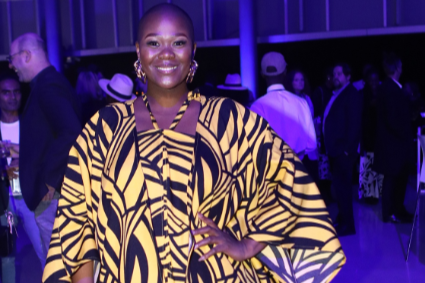 Then there’s actor Ashley Taylor, who was an Isidingo baddy in its heyday, and broadcaster Ashraf Garda.

A quick hello to Tracy-Ann van Rooyen, who has switched from MultiChoice to head up programming at Disney, before catching up with someone else with a connection to the entertainment giant.

That’s Connie Chiume, who appeared in Black Panther, the movie which, with earnings of more than $1.3bn, is one of the highest grossing of all time and was produced by Marvel, one of the companies Disney owns.

Ma Connie didn’t have too much trouble following the night’s “touch of Disney” dress code — she draped a Black Panther-branded Basotho blanket over her bold African print dress.

“They bought these blankets here, took them to Atlanta to use in the movie, branded them and sent them back to us as gifts,” quipped the legendary actress. 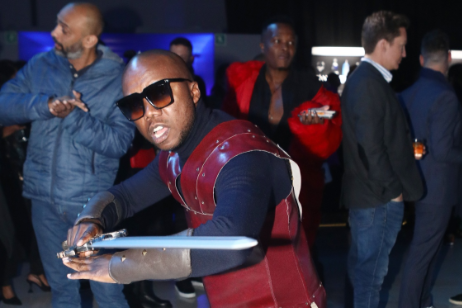 On to meeting TV’s hottest hunk right now, Kwenzo Ngcobo, who happily disrobes in his role on The Wife, and who turned up with his little sis, Sinothile, whom he calls “Snow White, because she’s a princess”.

By that stage, all we had had to line our bellies was popcorn — albeit with gourmet toppings like truffle oil or Parmesan thyme.

So a bit over an hour later we are grateful to be led into another part of the venue where we could tuck into a buffet of cheeses, breads, antipasti and crudités before the night’s official start. 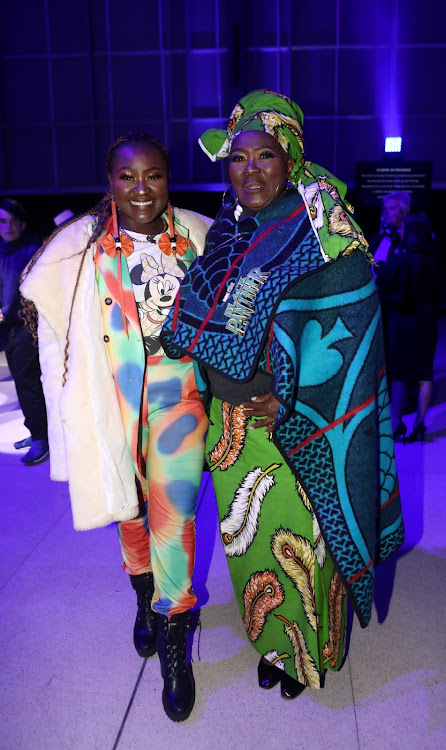 It is there that I greet reality star Lasizwe Dambuza and radio personality/actress Thando Thabethe and catch up with filmmaker Akin Omotoso, who shot one of Disney’s latest flicks, a basketball film called Rise that will debut on the streaming service in June.

Instead, we have Christine Service, the Walt Disney Africa general manager, to welcome us and tell us the company is “all about creating amazing quality entertainment”.

As proof, during the night we get a taste of what’s on offer as dancers perform against a backdrop of massive screens flighting footage from a host of programming including Star Wars, National Geographic, the animated musical Encanto and The Kardashians — reflecting the more than 1,000 films and 1,500 series which the service, at R119 per month, will be offering.

We also get to take in a performance by Busiswa, who sings that Beyoncé song she performs on the Black is King soundtrack, and are wowed when the screens cross live to Moses Mabhida Stadium in Durban, Zeitz MOCAA in Cape Town and FNB Stadium in Soweto which all feature CGI projections of Disney programmes.

One bloke whose get-up deserved to be projected on those screens was radio man Tbo Touch, who turned up in a Gladiator-inspired dress complete with a “sword”.

“I am here protecting the industry,” proclaims the broadcaster who, like many of us, was horrified by bumbling arts and culture minister Nathi Mthethwa’s R22m flag project. 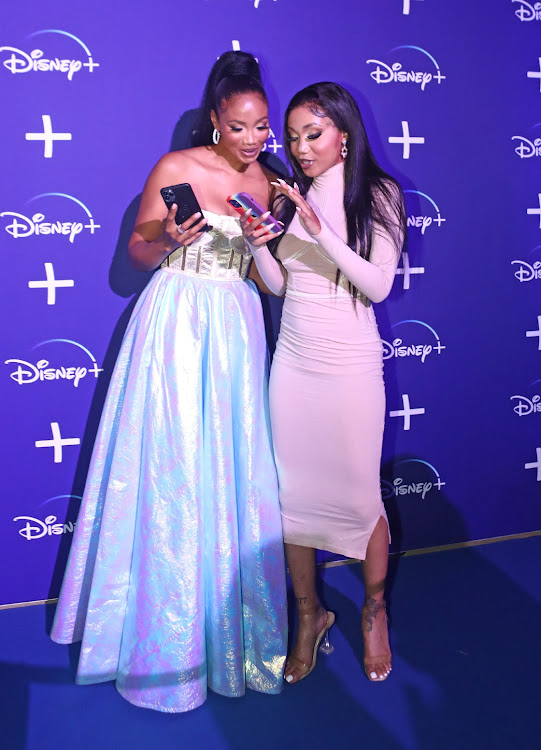 As for the grub when we finally get served?

The sugar fest was inspired by the flamboyant reality TV lives of Kim K and her family, who jumped shipped from E! to Disney for their latest show.

From Disney on to décor on Tuesday evening, when the design set converged at chic multi-brand décor emporium Always Welcome’s Kramerville outpost for the launch of Design Joburg. 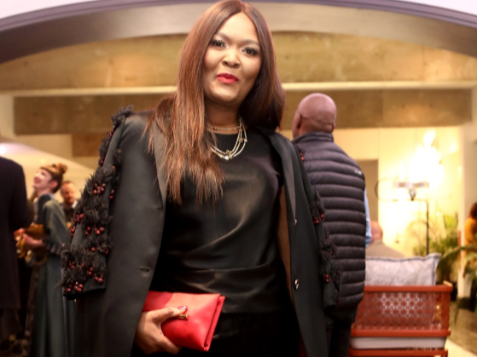 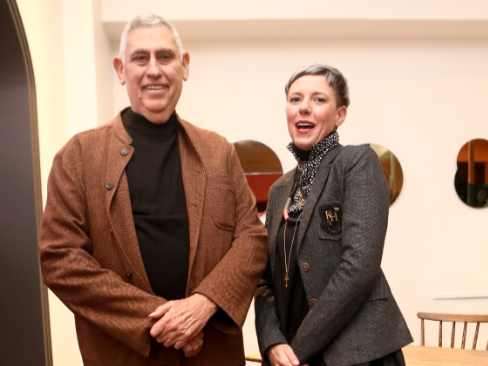 The expo, which took place over three days at the Sandton Convention Centre, included pop-up experiences in the area which aims to be Joburg’s design district.

This was a vibey affair with guests including dapper man about town Maps Maponyane and interior designer Bilala Mabuza, who is married to Signature restaurateur Desmond mabuza and who was sporting very chic Valentino shoes.

In between snacking on my mini cheese board, I chat to architects Gillian Holl, of Veld Architects, and Peter Rich, who is behind the world-renowned Mapungubwe Interpretation Centre.

What’s next, I ask Peter, to which he replies: “We are about to start work on an award-winning bid for a green city in a Central African country in collaboration with the lead architects, who are a top British firm.” 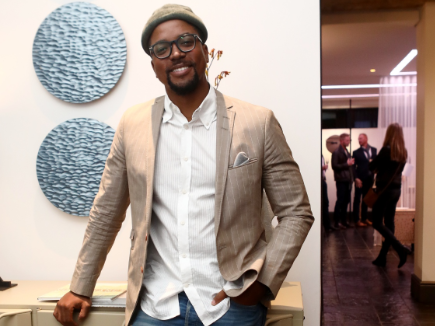 From the pre-screening of a racy new series set in a family make-up empire to the arrival of a luxe French ethical cosmetics brand, beauty ...
Lifestyle
3 months ago

IN PICS | A diamond- and star-studded multiverse

Mall of Africa’s Fireroom was a fitting venue for a night of hot fashion, fiery Asian cuisine and tasty Cruz cocktails
Lifestyle
3 months ago