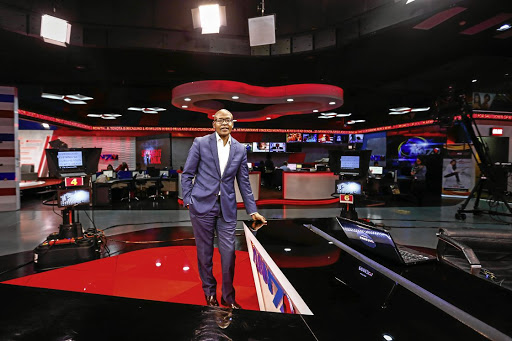 Mzwanele Manyi hopes to rehabilitate the image of the company he has bought from the Gupta family and turn it into a serious player in South Africa's media landscape.

The family announced on Monday that it had sold Infinity Media, which houses The New Age newspaper and ANN7 TV station, to the 54-year-old former government and cabinet spokesman, for R450-million.

It did not take long for the newly minted media mogul, whose purchase of its assets is being financed by the Gupta family, to move into his new office on the first floor of the firm's headquarters in Midrand. The office, in the corner of the daily newspaper's newsroom, used to belong to Atul, the second-eldest Gupta brother.

There's something clinical about its ambience, which is accentuated by its unadorned grey and white walls. Perhaps the only sign that it is the boss's office is the white bar-fridge at the corner, stocked with soft drinks and bottled water.

This is where we meet the new owner of the media stable that has become synonymous with partisan politics since its establishment almost seven years ago.

I wanted the Guptas to clear the business... you mustn’t come here to meet me and then bump into Atul

Manyi has been busy fielding calls and setting up meetings with a range of influential people he would like to convince to support his business. Earlier, he met the 500 people who staff his TV station and newspaper, to bring them up to speed with his plans for the company.

Being office-bound is a change for the father of three. Before he took up his new gig, he split his working time between his Decolonisation Foundation, his investment firm Afrotone and the Progressive Professionals Forum.

His late mother used to sell livestock in the townships and bequeathed the running of the business to him. So, in addition to his other duties, when he's not helping his eldest son run his agro-processing business, Manyi can be found at a kraal in Meadowlands, Soweto, tending livestock.

It's a bit of a mystery where the owner of Lodidox - who is also a lay preacher at Bantu Church of Christ - finds time for all these activities. Then again, Manyi has always been a man of many hats. He was head of both the Black Management Forum and the Commission for Employment Equity when he shot to fame more than a decade ago.

TimesLIVE has sent a legal letter demanding that Gupta ally Mzwanele Manyi provide information on the identities of shareholders in Lodidox.
News
4 years ago

His dramatic appearances in parliament were once dubbed "the Jimmy Manyi show". This is because, in a single sitting of the labour portfolio committee, for instance, he would don his commissioner's cap and denounce black executives as "house n***ers" in thrall to corporate South Africa - then reappear as the BMF president and recommend a crackdown on the offending companies.

Where does he get the energy?

"I work on a 24-hour clock. I have no contract with sleeping. Fortunately, I am one of those people that are good sleepers. When I sleep, I die," says the Sandton resident whose businesses are headquartered in his childhood home in Soweto.

"Most of my work is intellectual work. So I can sit at home and send things out."

The price is subject
to negotiation...
there are all kinds of confidential things between the
buyer and the seller that you promise each other.

He also uses his Sabbath to unwind when he's not at church.

Manyi's latest acquisition seems to be grossly overpriced, at R450-million for an outfit that has struggled to attract advertising since allegations of state capture by the Gupta family became public. It was, after all, reportedly valued at between R40-million and R60-million a few months ago.

Vendor-financed empowerment deals typically involve the sale of stakes in firms at a discount to their underlying asset value. Has Manyi been tricked into buying a dud that might burn a huge hole in his pocket in the long run?

"I made inquiries [about the valuation]. I got a satisfactory explanation. That R50-million valuation doing the rounds was not a valuation for the entire business. It was for a minority stake for whoever was [buying] at that time. That happened some time ago. Things have changed drastically from then. The important thing is that it was just a fraction of the total business. Then I wanted to know from the people what the percentage of that stake was so I can compute to see how the numbers talk to the R450-million.

"The explanation was that there's a difference because when you buy and sell, that discussion starts at a particular point and then there's always negotiations and other considerations that come to the fore.

"So the end price, which you sell at, doesn't talk to your rigid valuation. It's a subject of negotiations because there are all kinds of confidential things between the buyer and the seller that you promise each other," he says.

The R450-million is the "discounted cash-flow evaluation"- meaning it factors in future cash earnings to determine what the company is worth at the moment. That's as clear as his explanation gets.

Krila, as Manyi is also known, appeals to his authority as a former banker to assure me that he knows what he has signed up for.

Although he's now a fierce critic of "white monopoly capital", he spent part of his career as an executive at People's Bank and Barclays PLC. He also worked for blue-chip companies such as Toyota, IBM and Tiger Brands before he took up employment in the government when President Jacob Zuma came to power in 2009. He was CEO of the Government Communication and Information System when his controversial tenure ended in 2013.

"I have looked at the numbers and I am very happy that what I am buying is making sense," he says.

News of the deal has been met with scepticism by those who think he is a Gupta front. The SACP, for example, said Manyi would just be the "general manager" of the assets.

Manyi says he is happy the ANC came out in support of his new venture.

"In life it doesn't matter what you do. You will always find somebody that is not happy. It's unrealistic to think that when you do something you will get unanimity.

"I always make an example with a very good man, Jesus Christ. You would think there would be absolute unanimity [about him], but they ... killed the guy," he says.

Mzwanele "Jimmy" Manyi was laughed at during his first meeting with employees of ANN7 and The New Age on Thursday.
News
4 years ago

Part of his business strategy is to turn the news outlets into "a conveyor belt" for government and business information. He says his stable will run with government information that is not considered "newsworthy" by other outlets. He also promises to be politically nonpartisan.

But how will he attract government advertising if Nkosazana Dlamini-Zuma's presidential bid, with which he is openly associated, bombs at the ANC elective conference in December? He says ANN7 will give a platform to all the ANC leadership contenders and will not cover politics in a factional way.

He also promises to abide by the Press Code, although he is noncommittal when asked if The New Age will resubmit itself to regulation by the Press Council after pulling out in a huff two years ago.

"Whether the regulatory environment of the news media accommodates that, it's a matter we must discuss with the people concerned."

He is not planning to ring the changes where management is concerned, and dismisses rumours that axed SABC chief operations officer Hlaudi Motsoeneng is headed to Midrand. It is interesting that he is deliberately avoiding being seen as close to allies of the Gupta family like Motsoeneng, who authorised the now canned New Age-SABC breakfast show that raked in R20-million a year for Infinity Media.

Avoidance of "the Gupta effect" is also the reason he did not want to come in as the family's empowerment partner.

"I wanted them to clear the business as soon as possible so that you mustn't come here to meet me and then bump into Atul. They must clear out so that it's clear that this is a new arrangement."

Whichever way you look at this deal, Manyi has done well for himself considering his past as an advocate for BEE and employment equity. One of his past critics labelled him a "professional black", as opposed to a "black professional", saying he had mastered the art of deploying his blackness as a political currency.

Wearing many hats has ensured that he uses his political activism to his business advantage. Part of the reason he left his job as director-general at the Department of Labour in 2010 was because the Norwegian ambassador complained about his alleged use of an official trip to that country to conduct private business.

However, Manyi says he has never used his position to feather his own nest. He says the fact that he is doing his first deal at the age of 54 is proof of that.

Manyi is known to doggedly defend a cause once he buys into it. As IBM's director of BEE and corporate affairs in 2005, he strongly defended the IT multinational's refusal to sell a stake to South Africans at the time. He still maintains that such a deal would have "amounted to fake equity", saying it made more sense for the company to transfer skills instead.

In the same vein, he defended Tiger Brands as its corporate affairs executive when it was accused of bread price-fixing in 2007. He famously said the company did not benefit from participating in the bread cartel, even though it eventually agreed to pay an administrative fine of R99-million.

He has been acting true to form in defending Zuma and the Guptas in the wake of their many scandals.

He plans to meet politicians across the spectrum and other influential people over the next few weeks to sell his business idea. For the chartered marketer who trained as a geologist, getting buy-in for a business so closely associated with the Guptas will be his hardest sell by far.