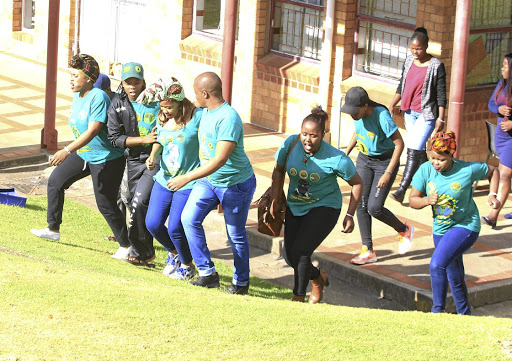 For a short while Sibongile Mani was the queen bee of her own celebrity bubble.

The 27-year-old accounting student at Walter Sisulu University in East London doled out favours to friends who slugged back shots of whisky - the kind that costs R700 a bottle.

Miss ManiBags and her posse swaggered around wearing expensive weaves, showing off iPhone 7s and other signals of success. Mani is accused of wearing a R3,000 Peruvian weave and arriving at lectures in designer clothes.

Then the Beyoncé fantasy burst, leaving Mani with the worst hangover of her life.

Her political opponents at the university let the cat out of the bag. Mani's bank account had ballooned from a R1,400-a-month student loan to R14-million - and she was spending it like Grace Mugabe.

Although Mani now claims she alerted authorities to the surprise bonanza, records show that she immediately grabbed her bank card and embarked on a spending spree that amounted to R11,000 a day.

She squandered R818,000 in 73 days. At that rate it would have taken her four years to spend it all.

Her spending spree created a media frenzy with headlines across the world. It sparked hundreds of memes and even prompted a parody Twitter account under the name Sibongile Money.

After promising to speak to the Sunday Times, the baby-faced student activist claimed - in a soft, quivering voice - that she was not well. She then broke down in tears before fleeing.

In an SMS she later informed the Sunday Times that she was seeing a psychologist to help her through the trauma.

● R13,659,249 is the balance shown on a leaked Spar till slip that raised suspicions about Sibongile Mani

● 73 is the days she took to spend the money

●R11,000 is the average amount of cash she spent each day

Mani is said to have performed a traditional ceremony weeks after mistakenly receiving the millions. Last month she returned to her grandparents' home in Ilinge village near her hometown of Queenstown. There the ceremony was performed and attended by some of her friends.

A neighbour of her grandparents said the community had been surprised to hear about her windfall.

Her woes look far from over after IntelliMali, the company which distributes student funds, said it would lay a criminal complaint against Mani.

Some of Mani's fellow students have rallied around her. Lonwabo Sibonde, a member of the South African Students Congress, said the university's student representative council would protect her from action by authorities.

SRC member Samkele Mqai, who revealed Mani's windfall, said suspicions arose after a receipt from a Spar store had been leaked showing a balance of just over R13.6-million in her account.

"After the slip was trending on social networks, students started connecting the dots on how she had been living a luxurious life," said Mqai.

"She threw surprise birthday parties for her friends and used some of the money to fly to events like the Durban July."

He said he did not believe Mani's assertion that she had reported the massive payment to the SRC.

The R14-million mistake is more than a morality game

You’re walking through a building‚ let’s say the accountancy department of Walter Sisulu University in Mthatha‚ and you find a handbag. You open the ...
Ideas
4 years ago

Walter Sisulu University has said it will be scrutinising the full transaction records of Sibongile Mani, the student who accidentally received a ...
News
4 years ago

Walter Sisulu University has said it would be scrutinising the full transaction records of Sibongile Mani‚ the student who accidentally received a ...
News
4 years ago