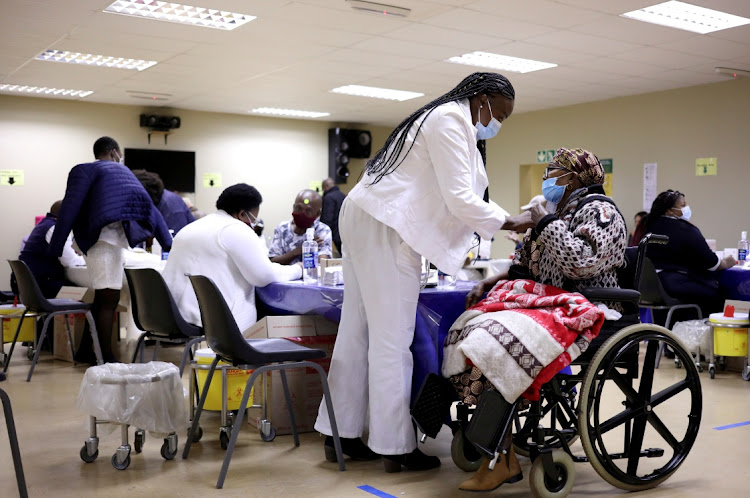 SA recorded more than 10,510 new Covid-19 cases and 118 deaths in the past 24 hours, the National Institute for Communicable Diseases (NICD) said on Friday.

This means that there have been 1,796,589 confirmed cases and 58,441 fatalities recorded across SA to date.

According to the NICD, the new infections came at a 20.5% positivity rate.

French government to vaccinate its citizens in SA

If you are French, aged 55 and above, and live in SA you are eligible for Covid-19 vaccination.

This week the French embassy in SA and the consulates-general of Cape Town and Johannesburg announced that they will be vaccinating French nationals in the country, including the staff in the French network who are aged 55 and older.

The vaccination campaign follows the visit to SA by French President Emmanuel Macron a few weeks ago.

French government to vaccinate its citizens in SA

If you had planned a family braai or dinner this weekend, it would be safer to cancel it.

That is the message from the Western Cape health department as Covid-19 cases in the province escalate rapidly. On Friday the department said its surveillance teams had picked up that many cluster outbreaks were a result of small social gatherings rather than mass gatherings.

“Most of these outbreaks do not stem from mass events, but from smaller social gatherings such as family, friend gatherings, funerals, bowling and sporting events and braais. These social gatherings have such a negative impact on our [Covid-19] response.

There are now 4,700 Covid-19 cases in Gauteng schools, as infections in the provincial education sector continue to rise.

“We can confirm that the Covid-19 positive cases have increased. When you compare with the previous figure of just about 3,000, now we are standing at 4,706 cases that are coming from our schools,” said department spokesperson Steve Mabona.

During his 2021/22 budget speech on Thursday, provincial education MEC Panyaza Lesufi announced that 20 schools had closed in the province due to Covid-19 cases.

Due to a lacklustre response to stricter measures intended to curb the spread of Covid-19, coupled with rising numbers of hospital admissions in Gauteng, the government has been forced to rope in the military.

After meeting President Cyril Ramaphosa and defence and military veterans minister Nosiviwe Mapisa-Nqakula on Thursday, acting health minister Mmamoloko Kubayi-Ngubane announced on Friday that the military health services would be deployed in the province.

“After the conversation with the president and the minister of defence and military veterans, we have requested additional capacity to assist Gauteng in terms of military health personnel who have moved into the province to help us swiftly,” said Kubayi-Ngubane.

Notting Hill Carnival, billed as Europe's biggest street party, has been cancelled for a second year in a row due to the Covid-19 pandemic, organisers said on Friday.

“This has been an incredibly difficult decision to make,” they said in a statement. “Everyone involved in the event desperately wants a return to the road where Carnival belongs but safety has to come first.”

The Notting Hill Carnival traditionally takes place at the end of August.

A third wave of coronavirus infections is likely to hit India by October, and although it will be better controlled than the latest outbreak the pandemic will remain a public health threat for at least another year, according to a Reuters poll of medical experts.

The June 3-17 snap survey of 40 healthcare specialists, doctors, scientists, virologists, epidemiologists and professors from around the world showed a significant pickup in vaccinations will likely provide some cover to a fresh outbreak.

Of those who ventured a prediction, over 85% of respondents, or 21 of 24, said the next wave will hit by October, including three who forecast it as early as August and 12 in September. The remaining three said between November and February.

Aged 50 to 59? Alan Winde wants you to be able to register for the Covid-19 vaccine

Western Cape premier Alan Winde says it's time for the government to open up Covid-19 vaccine registrations for residents aged 50 to 59.

Winde said there's no reason this shouldn’t happen while vaccinations of citizens 60 and older continue under the second phase of the Covid-19 vaccine programme.

The second phase started in May and is set to wrap up in October. The government aims to vaccinate 5.5 million citizens aged 60 and older by the end of June.

Aged 50 to 59? Alan Winde wants you to be able to register for the Covid-19 vaccine

She said political leaders should be exemplary and protect the lives of their supporters.

Speaking at the portfolio committee on health on Thursday, Kubayi-Ngubane said the country is “technically in the third wave of infections”, and urged political leaders to adhere to the tightened Covid-19 restrictions to prevent infections.

Companies should find a reasonable resolution that accommodates all parties when employees refuse to be vaccinated on medical or constitutional grounds.

This is according to employment and labour minister Thulas Nxesi, who issued new directives for workplace vaccinations this week.

Nxesi said this formed part of the new consolidated direction on occupational health and safety measures in certain workplaces.

Coronavirus-related deaths worldwide passed a grim milestone of 4 million on Thursday, according to a Reuters tally, as many countries struggle to procure enough vaccines to inoculate their populations.

Prime Minister Jacinda Ardern received the her first shot of the Pfizer Covid-19 vaccine on Friday, as the country steps up efforts to inoculate its population.

The Pacific island nation shut its borders and used tough lockdown measures to become one of the few countries to have virtually eliminated Covid-19 in the community, but the government is facing criticism for a slow rollout of vaccines.

"I'm smiling under the mask," Ardern said as she sat down to receive the shot at a vaccination centre in Auckland, as the media watched on.

UK twins Minnie Walsh and Patrick Speed, separated at the same care home in Hull for more than a year, have finally been reunited.

The twins aged 92 lived in different units of the same home, Saltshouse Haven, and were only reunited after receiving the Covid-19 vaccination jab.

BBC news reports that the twins had previously been apart once when Speed was in India during World War 2.

Acting health minister Mmamoloko Kubayi-Ngubane said on Friday that the SANDF military health service was being deployed in Gauteng to ease the burden on health practitioners as Covid-19 surges in the province.

“What we have decided after meeting with the president and the ministry of defence is that the military has been deployed to the province. What this will do is to assist with the capacity of the beds, they will help us ... with beds and human capacity,” said Kubayi-Ngubane.

Kubayi-Ngubane, along with a panel of experts, briefed the nation on progress made by the government in its efforts to curb the pandemic, including an update on the national vaccination rollout.

The SA Medical Association (Sama) is the latest organisation to react to regulations under alert level 3 of the nationwide lockdown, claiming the restrictions on the sale of alcohol don’t make sense.

On Tuesday, President Cyril Ramaphosa moved the country from level 2 to level 3, announcing that alcohol will only be sold for off-site consumption from 10am to 6pm on Monday to Thursday.

Bars and restaurants can sell liquor every day until 9pm.

Some 760,000 South Koreans who have received a first dose of AstraZeneca Plc's Covid-19 vaccine will be offered Pfizer Inc's vaccine as a second shot due to shipment delays by global vaccine sharing scheme COVAX, the government said.

Several countries, including Canada and Spain, have already approved such dose-mixing mainly due to concerns about rare and potentially fatal blood clots linked to the AstraZeneca vaccine.

A Spanish study found that giving a dose of the Pfizer shot to people who already received the AstraZeneca vaccine is highly safe and effective, according to preliminary results.

Some 835,000 doses of the AstraZeneca's vaccine from COVAX were scheduled to arrive by the end of June, which South Korea planned to use mainly as a second shot for around 760,000 health and frontline workers who had received their first dose in April.

The shipment is delayed to July or later, while the country had used up available AstraZeneca reserves to meet stronger than expected participation in its vaccination campaign which helped the country meet its first-half inoculation target ahead of schedule.

Over 27% of its 52 million population have been inoculated with at least one dose of a coronavirus vaccine as of Thursday, and the country is on track to meet a target of 70% by September and reach herd immunity before November.

Japanese corporate giants are joining the nation's Covid-19 vaccination effort ahead of the Olympic Games as the government struggles to meet its inoculation targets amid fears of a resurgence of infections.

Thousands of corporations from Toyota Motor Corp to telecom and investing outfit SoftBank Group Corp are setting up clinics in a massive private-sector vaccination drive which will begin in earnest on Monday.

The campaign, launched with the government's backing, takes added urgency with the start of the Tokyo Olympics just over a month away and fears that the influx of visitors could cause a resurgence in infections.

So far, more than 2,300 companies have applied to open vaccination centres that will give shots to about 11 million people, mainly their employees, family members and nearby residents.

"Hopefully, vaccination at the corporations will help us speed up the inoculation process," said Taro Kono, the minister in charge of the vaccine push."

With the number of applications from the corporations, I think we can reach 1 million (doses a day) by the end of this month.

"Hitting that daily rate will be critical to achieving Japan's vaccination goals, namely getting shots to all the elderly by the end of July and the rest of the adult population by November at the latest.

Just 16% of Japan's population have had at least one shot, according to a Reuters tracker, the lowest rate among comparable wealthy economies.

German firm CureVac said its Covid-19 vaccine was only 47% effective in a late-stage trial, missing the study’s main goal and throwing in doubt the potential delivery of hundreds of millions of doses to the European Union.

'All provinces are in trouble,' health department tells parliament

The health department on Thursday painted a bleak picture of what the country’s third wave looks like, with hospital admissions, daily infections and deaths continuing to soar.

Acting minister of health Mmamoloko Kubayi-Ngubane appeared in parliament — along with health director-general Dr Sandile Buthelezi and other senior officials — to give an update on vaccine procurement, state of preparedness for the Covid-19 third wave and progress made on the Special Investigating Unit’s Digital Vibes probe.

'All provinces are in trouble,' health department tells parliament

US Secretary of State Antony Blinken said that the United States delivered one million Covid-19 vaccine doses to Canada on Thursday.

"Today, as part of the U.S. commitment to help contain the virus, we delivered one million vaccine doses to our friend, ally, and neighbor", Blinken said on Twitter. Canada said earlier that it expected to receive around one million Moderna Inc shots from the United States on Thursday.

Covid-19 variants are spreading across Africa with the rise of the third wave and variants have been reported in about 50% of member states, said Africa CDC director Dr John Nkengasong on Thursday at his weekly briefing.