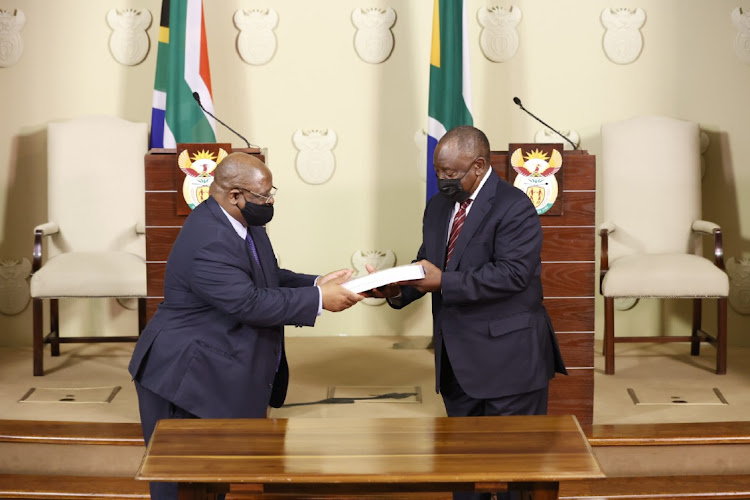 The second instalment of the state capture report, which deals with corruption at state-owned entities (SOEs) Transnet and Denel, was released publicly on Tuesday.

It was handed to President Cyril Ramaphosa by acting chief justice and chairperson of the state capture inquiry Raymond Zondo.

The president received the first part last month. It dealt with evidence of corruption, fraud and racketeering at SAA and the SA Revenue Service , among others.

The presidency welcomed the report, saying it was a significant step towards ridding SA of corruption.

Here are must-read stories about the report so far:

Malusi Gigaba knew the Guptas and did their bidding

The report said claims by former public enterprises minister Gigaba that he did not know the corruption-accused Gupta brothers must be dismissed.

Zondo said the former minister’s relationship with the Guptas dated back to the early 2000s during his tenure as ANC Youth League leader.

He allegedly used his position to appoint Gupta associates to key positions at government-owned companies, including Transnet.

Former public enterprises minister Malusi Gigaba knew the controversial Gupta family well and even knew their mother, even though he denied this ...
Politics
6 months ago

‘Zondo hopes this will kill me politically’

Taking to Twitter in response to the findings in part 2 of the report, Gigaba claimed that three years and R1bn later, Zondo had found no evidence to warrant a recommendation that he be charged with corruption.

“Instead of clearing me, he asks that I be investigated more in the hope this will kill me politically. If only he and his handlers knew,” said Gigaba.

Gigaba reacts to being implicated in state capture report: ‘Zondo hopes this will kill me politically’

Former public enterprises minister Malusi Gigaba has reacted to the release of the second part of the state capture inquiry report, saying acting ...
Politics
6 months ago

Zondo said Denel was run to the ground after the dismissal of group CEO Riaz Saloojee and the board that was in charge between 2011 and 2015.

Former public enterprises minister Lynne Brown did not retain the board in 2015, which was followed by the collapse of the SOE and concerns about its liquidation.

Acting chief justice Raymond Zondo says a board must be established to identify, select and recruit capable leaders for SOE boards and in top ...
Politics
6 months ago

Jail or R200m fine for abuse of power

The inquiry chairperson recommended government consider rendering it a criminal offence for public officials who abuse power to either appoint unsuitable candidates to key positions at SOEs or who unduly receive and award state tenders at the expense of the state.

He recommended a 20-year jail sentence or R200m fine, or both, for offenders.

Whether you're a president or a junior official, Zondo wants R200m or 20 years in jail for 'abuse of power'

If state capture commission chairperson Raymond Zondo gets his way, "abuse of power" will become a criminal offence that carries with it a maximum ...
Politics
6 months ago

Brown did know the Guptas and associates

Zondo said Brown lied when she denied knowing the Guptas, as evidence before the inquiry proved she helped them loot state resources.

Despite Brown claiming to not know Gupta associate Salim Essa, the inquiry obtained phone records relating to her, Essa and Tony Gupta “which show she had telephonic conversations with alleged Gupta lieutenant Nazeem Howa, as well as with Atul Gupta".

The conversations happened a day after the suspension of four Eskom executives, states the report.

The inquiry found the five, with the assistance of Gigaba’s political cover-up, helped the Guptas loot the SOE and allegedly benefited financially from their criminal syndicate between 2010 and 2018.

Inside the Molefe and Nyanda alliance

He is accused of breaching provisions of the Public Finance Management Act when he approved the settlement to General Nyanda Security (GNS) Advisory Services in January 2016.

Zondo recommended former bosses at Transnet be charged for inflating prices of locomotives initially set to cost R38.6bn before the price was increased to R54bn without a valid justification.

How the Guptas accessed Transnet

This relates to the individuals and companies receiving and laundering R79.23m paid by Transnet to a company owned by Wood and associates, Regiments, on April 30 2014.

How the Guptas captured Denel

The report reveals the Guptas captured Denel through the procurement of the Gauteng-based defence manufacturing company VR Laser in 2014.

They or their associate Essa are accused of “engineering for themselves a position as Denel’s most privileged supplier of complex engineering systems. This included steel armour plates and being Denel’s single and exclusive partner”.

The scathing report looks into how the Guptas captured SA’s defence manufacturer Denel through the procurement of the Gauteng-based defence ...
Politics
6 months ago

The report found former president Jacob Zuma’s testimony that he had no hand in the capture of Transnet to be untrue.

Zuma, the commission found, insisted on appointing “preferred candidate” and tainted Gama as Transnet CEO ahead of Sipho Maseko. The report states Zuma wanted Gama at the helm, despite him facing serious allegations of misconduct relating to tenders.

Zuma told the inquiry he had no preferred candidate for the Transnet CEO position, but the report said it had evidence contrary to this claim.

Shortly after the report went public, scores took to social media to weigh in. Some said they were not optimistic that the inquiry’s recommendations would be implemented while others welcomed the report. Some questioned if the ANC would be able to self-correct and undo the damage.

‘How will the ANC do damage control?’ - SA weighs in on the second part of the state capture report

"Another part of Zondo report, more info on the grand scale looting by the cadres, still no consequences," wrote one social media user.
News
6 months ago

"The handover of the second part of the report of the commission of inquiry is another significant step forward in the work we need to do to rid our ...
Politics
6 months ago

Zondo report unveils a hornets’ nest of corruption and racketeering

POLL | Should those who abuse power be jailed?

Abuse of power could carry a maximum penalty of a fine of up to R200m or 20 years in prison, or both.
News
6 months ago