Nightwatchman Rabada and Amla put on useful partnership at Wanderers 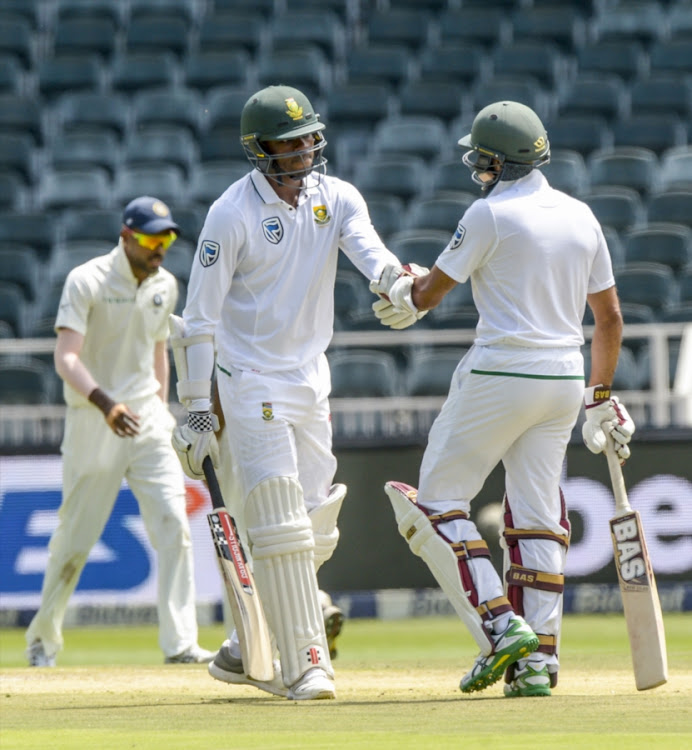 Kagiso Rabada and Hashim Amla of South Africa embrace each other as they kept on piling on the runs with a crucial partnership during day 2 of the 3rd Sunfoil Test match against India at Bidvest Wanderers Stadium on January 25, 2018 in Johannesburg, South Africa.
Image: Sydney Seshibedi/Gallo Images

Night watchman Kagiso Rabada and Hashim Amla put together a patient and useful partnership of 64 off 104 balls that helped South Africa to 81/3 at lunch of the second day of the third test against India at Wanderers on Tuesday.

Rabada‚ who usually bats at No. 9‚ scored 30 off 84 balls‚ a delightful knock that included six boundaries‚ before he was caught by Anjikya Rahane from the bowling of Ishant Sharma.

He received a standing ovation for his efforts from the small Johannesburg crowd.

The Proteas added 75 runs to their overnight score of 6/1 and Amla and AB de Villiers will continue to battle it out against the Indian seamers in the second session on this pitch that is producing consistent uneven bounce and seam movement.

Amla’s knock of 32 came off 52 balls and five boundaries while De Villiers was yet to put anything on the scoreboard as he only faced two balls in his brief appearance after Rabada’s dismissal shortly before lunch.

Rabada‚ who soaked up the pressure by playing sensible cricket and frustrated the Indian bowlers by leaving dangerous balls and punishing the bad ones‚ was removed agonisingly close to his highest Test score of 34‚ scored against New Zealand in Hamilton last year.

The other wicket to fall was that of Dean Elgar for only four runs after he nicked the ball to Indian wicketkeeper Parthiv Patel‚ who dived low to his left to claim an easy catch from the bowling of Bhuvneshwar Kumar.

Before close of play on Wednesday‚ the Proteas lost opener Aiden Markram for two runs from the bowling of Kumar.

The Indian bowlers will be desperate to remove Amla and De Villiers as soon as possible in the second session.

Farhaan Behardien’s legion of detractors finally got their way on Thursday when he was dropped from the squad to play India in the first three of six ...
Sport
4 years ago

SA all-rounder Andile Phehlukwayo says they had a good outing on the opening day of the third Test on Wednesday after they bowled out India for 187 ...
Sport
4 years ago