Blue Bulls and Sharks close in on Free State 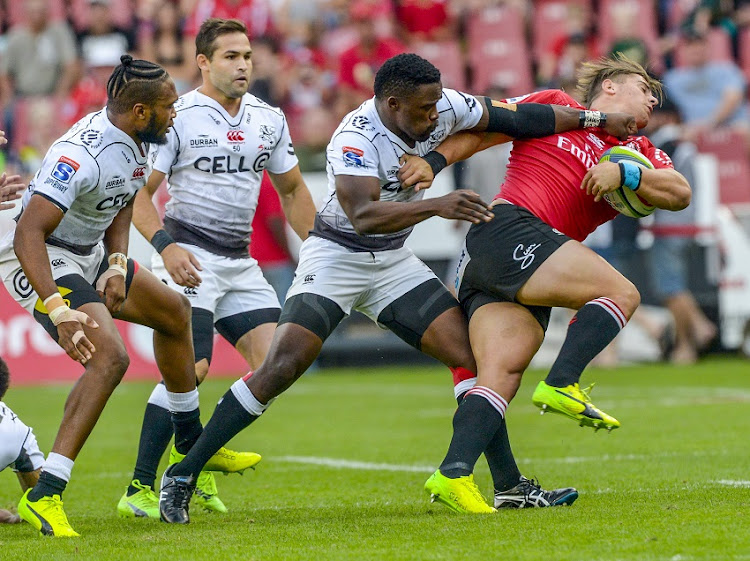 Sharks clash against the Lions during the Super Rugby at Ellis Park.
Image: Gallo Images

The Blue Bulls‚ Sharks and Western Province all closed up on the Free State Cheetahs at the top of the Currie Cup standings after recording third round victories this weekend.

The Cheetahs had a bye but will face two games in three days this week‚ with fixtures against the Pumas in Nelspruit on Wednesday and Griquas in Bloemfontein on Saturday.

But as it stands the log is congested at the top with three teams – Free State‚ the Blue Bulls and Sharks – locked on 10 points.

WP have five points from two games. The Cheetahs and Blue Bulls have a game in hand on the Sharks‚ who have already played three times.

WP recorded a patchy 34-10 win over the Pumas at Newlands on Saturday while John Mitchell’s project at the Blue Bulls showed promise as they trounced the Lions 54-22 at Loftus.

The Sharks scored a 41-3 win over Griquas in Durban on Friday night.

WP face Griquas in Kimberly on Wednesday‚ which is followed by a home game against the Blue Bulls on August 12.

"We have to get five points from both the next games and start building a consistent team‚” WP coach John Dobson said.

“The guys are getting to know each other and are settling in well.

"With that being said‚ I am really reluctant to make mammoth changes because it does result in the lack of cohesion within the side. We will lean a bit more to similar players for the two weeks‚ rather than making to many changes.”

The Blue Bulls started their clash against the Golden Lions with a bang as they raced to a 21-0 lead in the first 11 minutes thanks to three converted tries at Loftus.

Their Gauteng neighbours hit back with three unconverted tries in the space of 10 minutes – two of which were scored when the hosts were reduced to 14 men and the other when they were down to 13 men – but another seven-pointer by the Blue Bulls on the stroke of halftime handed them a 28-15 lead.

The home team added another four second-half tries to take their tally to eight‚ while the opposition were only able to add one‚ which steered them to a rewarding 54-22 victory. The Golden Lions’ last try‚ however‚ ensured that they earned a bonus point.

The Sharks capitalised on their try-scoring chances throughout the match against Griquas and supported this with a solid defensive effort‚ to outscore the Kimberley side six tries to none for their bonus-point 41-3 victory.

The KwaZulu-Natalians scored twice in the first half and added a penalty goal for a 17-3 lead at the break‚ and they added another four second-half tries‚ with 2016 Junior Bok winger Sbu Nkosi touching down twice in the match. - TimesLIVE