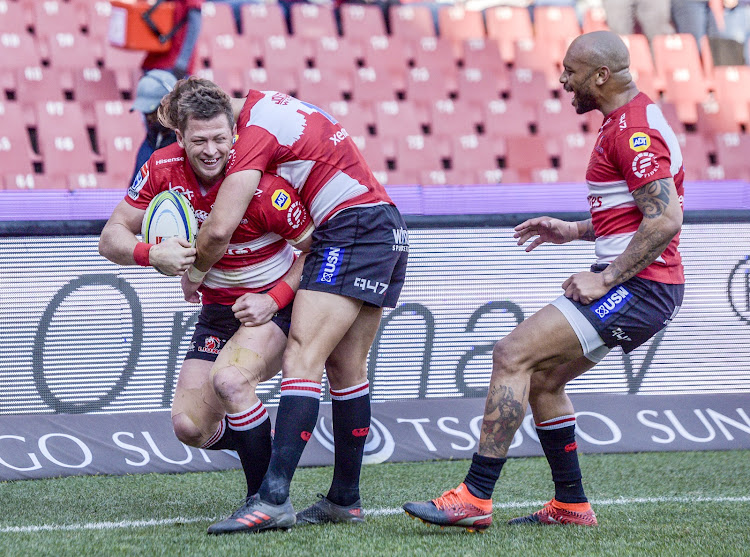 Ruan Combrinck of the Emirates Lions celebrate with team mates Andries Coetzee and Lionel Mapoe after scoring his try during the Super Rugby game against the Jaguares at Emirates Airline Park Stadium, Johannesburg on July 21 2018.
Image: Christiaan Kotze/Backpagepix

Andries Coetzee’s bid to regain the Springbok No15 jersey had better take flight in the Lions’ Super Rugby semi-final against the Waratahs on Saturday.

The fullback has committed to staying with the Lions for another Super Rugby season in the hope of earning selection for the Springboks at next year’s World Cup.

“I had to make a decision and I believe it is the right decision to give myself a chance to be in the World Cup squad next year‚" he said.

"I feel at ease having signed at the Lions until the end of Super Rugby next season.”

It will be a good time to rise above his challengers this weekend.

The Waratahs will bring a game in which they will want to test the Lions on the margins and their aerial attack is very much part of their battle plan.

Waratahs assistant coach Chris Malone described fullback Israel Folau as the best aerial attacker in the sport and there is more than sufficient empirical evidence to back the claim.

It means Coetzee‚ and his wing men Aphiwe Dyantyi and Ruan Combrinck will have to rise to the occasion.

“They have guys with X-factor‚ especially in the air.

"We are definitely working on it.

Waratahs prop Tom Robertson plans to give the Lions an earful

‘Pass the cheese sauce‚ please’ is the last thing that will flash through your mind as Waratahs’ prop Tom Robertson approaches.
Sport
3 years ago

"I believe we will be good this weekend covering that threat.

"If they come with a kicking threat I believe we will be ready.”

The ‘Tahs also present considerable threat on terra firma and none more terrifying than left wing Taqele Naiyaravoro who has stomped his way to the top of Super Rugby’s try scoring charts.

“If it is your job to stop someone and you are 80kg and the other guy is 80kg heavier you just have to stop him.

Robert Marawa returns to the radio airwaves on August 1 and he is expected to be accompanied by his trusted producer Beverly Maphangwa and the ...
Sport
3 years ago

"That’s why we play the game‚ to challenge yourself‚” Coetzee said matter of factly.

“I won’t say there is any special way to stop him but‚ just stop him. It is a mindset thing.

"I’m not saying if you want to tackle someone you will‚ but at least you have a chance as opposed to the person who doesn’t want to.

"If you have a positive attitude I believe you can make a difference in defence‚” said Coetzee.